I don't usually do episode-by-episode anime reviews but this series is special. Given that so many reviewers complained that the earlier Sengoku Basara adaptations were difficult to follow I wanted to gather as much information as I could to help new viewers.

This is my second time watching the first episode; I already posted some spoilers from it earlier in the week. Animate TV posted some teaser screenshots yesterday too. I can now confirm that the music is credited to Tokuda Masahiro and the new female narrator seems to be Saiga Mitsuki.

I'm going to edit this part of the post a few times as more announcements are made.

These are the official ways to watch Sengoku Basara Judge End at the moment:

Television (Japan only)
The initial television broadcast on NTV is at 1:50 every Sunday morning (this is written as 25:50 in broadcast notation). The first episode's broadcast time was later than normal since it was scheduled for 26:05. The YTV and BS Nittere broadcasts are shown a week late.

NTV On Demand (Japan only)
This is a premium service. Fans can pay ¥900 to watch the whole series or ¥300 to see an individual episode. The previous week's episode is shown for free on Fridays and Saturdays. The series airs slightly early at 24:00 local time on Saturdays.

Hulu (Japan only)
Fans who pay the ¥933 monthly fee can watch the episodes slightly ahead of the broadcast time.

d Anime Store (Japan only)
Another premium service. The latest episode will be made available as part of their ¥400 monthly subscription.

These Japanese services will also be streaming Judge End; if you can't wait then it might be worth checking them to see whether any work in your region. I imagine they'll make the episodes available shortly after the television broadcast.

I'll add links to the official international streams as soon as they're announced:

FUNimation (US only)
The episodes will be streamed weekly on Saturdays at 12:05pm CST with English subtitles. FUNimation also have the home video rights, so if the stream is popular the series might eventually be dubbed into English.
Source

Anime Digital Network (France only)
ADN will be offering the series online with French subtitles. They charge a monthly fee for the service.
Source

Like many fans around the world I live in a country which has been excluded from the licensed simulcasts so far (thanks, anime industry!). In spite of this treatment I feel very strongly about supporting the official western version when it's available rather than resorting to piracy. The Japanese distributors will use the official viewing figures to see how successful the show has been while the US anime distributors like FUNimation use them to decide whether to give new titles home video releases, whether to dub them and whether to go the extra mile and produce a high quality premium release. If we want Sengoku Basara Judge End to receive a decent western release and raise awareness of the series, we need to make sure people are watching the official streams if possible. Please get your friends to watch it too if you can so that the industry can see that there's an audience out there.

I'd rather not say how I'm watching the Japanese streams but it's not that difficult to find a method with some searching.

The rest of this post contains spoilers for the first episode of Sengoku Basara Judge End and some very low quality screenshots.

This was my second time watching the episode. It was every bit as exciting the second time around; I really loved this alternate take on the story even if it had a different tone to the previous anime.

Since it's a retelling of the story from the Sengoku Basara 3 game (released in the west as Sengoku Basara: Samurai Heroes), many fans will already have an idea of what will happen even before they start watching. I recommend checking the game out if you've never played it or are new to the series.

The most important thing to understand about Sengoku Basara Judge End is that it has nothing to do with the previous anime adaptations other than sharing some characters and settings. The timeline is different, the character relationships are different and if the staff are telling the truth, the ending is going to be very different as well. Trying to match what happens to events from the earlier anime will be extremely frustrating.

Before the series starts

Prior to the events in Judge End, the warlord Oda Nobunaga was betrayed and killed at Honnouji by his retainer Akechi Mitsuhide. It's not mentioned in the anime's introduction but both Nouhime and Mori Ranmaru were said to have gone down with Nobunaga.

Akechi Mitsuhide was then defeated by Toyotomi Hideyoshi, who went on to lead his powerful army across the land.

The episode begins by introducing the setting and treating existing fans to a familiar scene. The Toyotomi army is attacking Odawara Castle and Sanada Yukimura is eager to discuss the matter with his lord, Takeda Shingen. 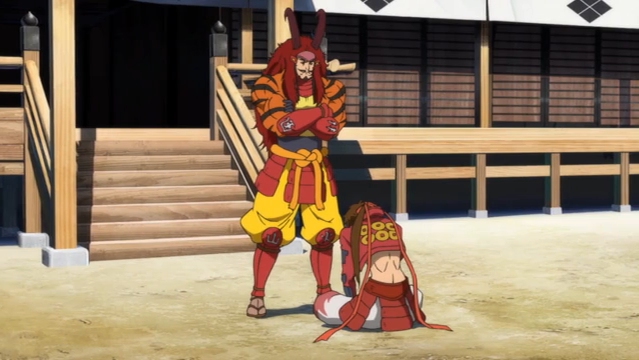 As the two exchange punches, the battle at Odawara is raging on and things don't look good for the Houjou forces. The men standing at Hideyoshi's side are Takenaka Hanbee, Ishida Mitsunari, Tokugawa Ieyasu and Ootani Yoshitsugu (often referred to as Gyoubu).

As he struggles with his aides (and bad back), the ageing Houjou Ujimasa cries out for support from one of his key fighters, legendary ninja Fuuma Kotarou. 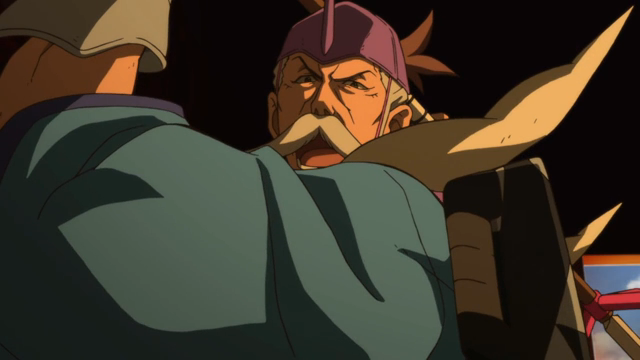 Meanwhile, Kotarou is watching the ninja defenders being torn apart by the Saika faction's guns.

The Saika-shuu didn't appear in the previous anime series so for the benefit of newcomers I'll explain that they're a group of mercenaries led by Saika Magoichi, a strong-minded woman with plenty of firearms at her command. 'Saika Magoichi' is the title for the group's current leader rather than an actual name. They're working for the Toyotomi forces at the time of this battle to help them take the castle. 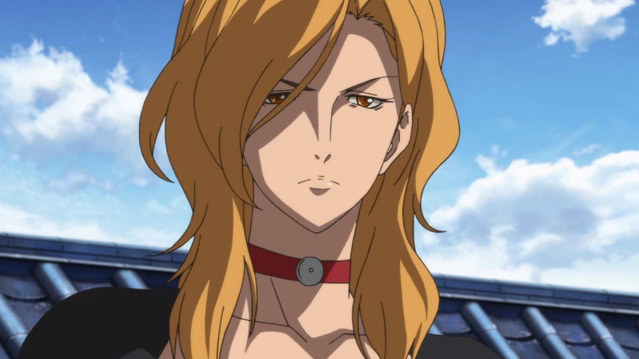 While all of this has been unfolding, Date Masamune has charged ahead of his army and is heading towards Odawara. He's pursued by his retainer Katakura Kojuurou, who is furious. Masamune intends to make a quick strike in the middle of the fighting. As he thinks of his rival, Yukimura, word of the Date intrusion reaches Kai. Yukimura is thrilled at the prospect of battle, but Takeda Shingen reacts with caution, warning Yukimura that there are other forces at work. 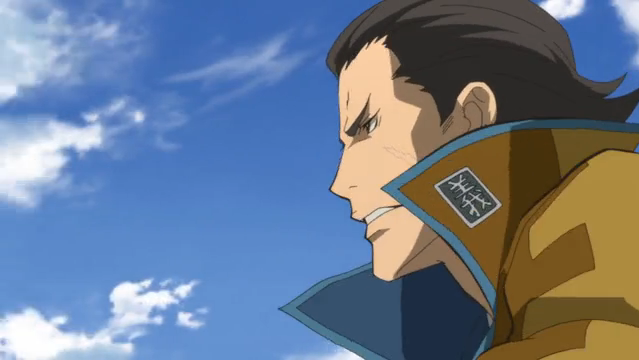 Ieyasu takes a group of his troops to meet with some Houjou soldiers. Flying warrior Honda Tadakatsu and the new anime-only character Sakai Tadatsugu are both at his side. As the soldiers gingerly step outside the safety of their castle gate a gunshot rings out, and a squad of Toyotomi soldiers led by Yoshitsugu ambush them and take the gate. Yoshitsugu thanks Ieyasu - who is mortified - for tricking the soldiers into trusting him in order to make the plan a success. 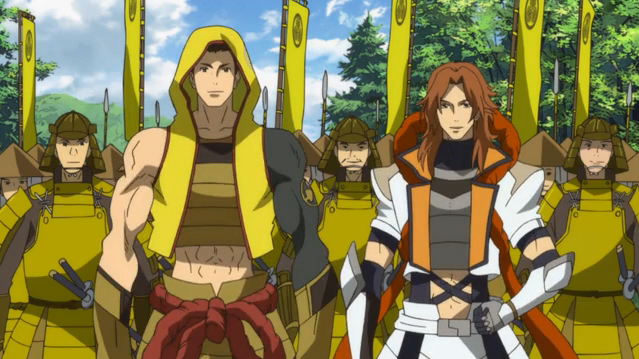 While neither Takeda Shingen nor his rival Uesugi Kenshin are at the battlefield in person, their ninja spies are watching from the sidelines with great interest. Sasuke teases Kasuga as usual. 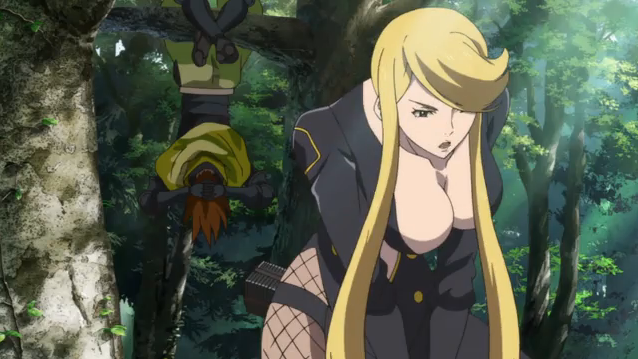 The Toyotomi forces hear about the approaching Date army and Hideyoshi gives Mitsunari permission to head them off. He furiously rushes away to confront the aggressors. 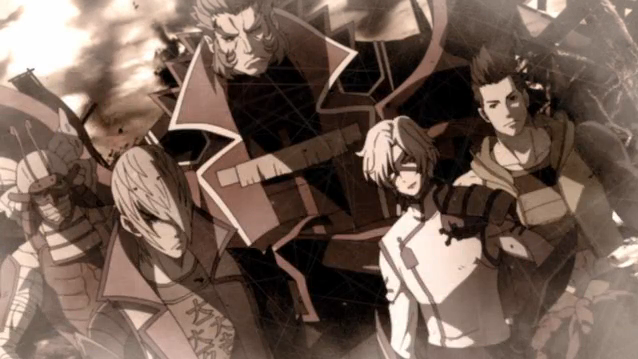 Meanwhile, a disillusioned Ieyasu meets with Hideyoshi - who has been left completely undefended. Ieyasu tells him that he disagrees with his methods, observing that Hideyoshi has changed. Hideyoshi brushes off Ieyasu's objections and Ieyasu casts his spear aside, rising to Hideyoshi's challenge for the sake of his ideals. 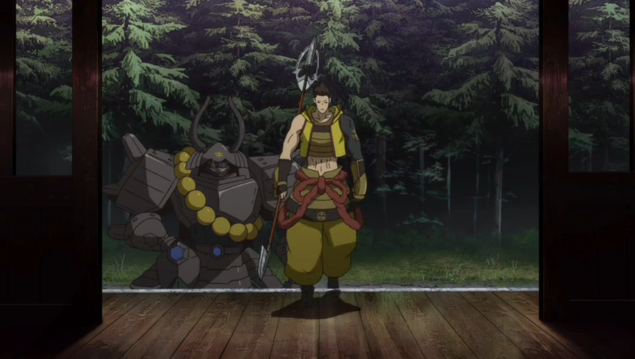 Far away from the main camp, Mitsunari confronts Masamune and Kojuurou by himself. 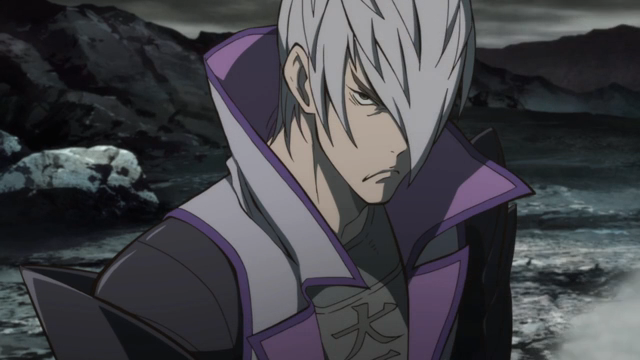 The battle is fierce; the maedate crest on Masamune's helmet is broken and a great deal of blood is spilled. 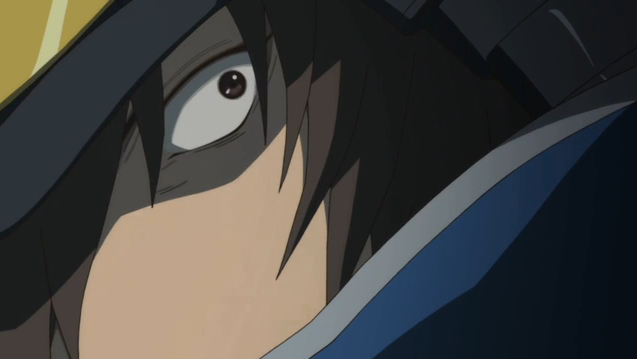 Back at the Toyotomi camp the fight has become so intense that it destroys the entire building. Hideyoshi seems to be dominating at first. 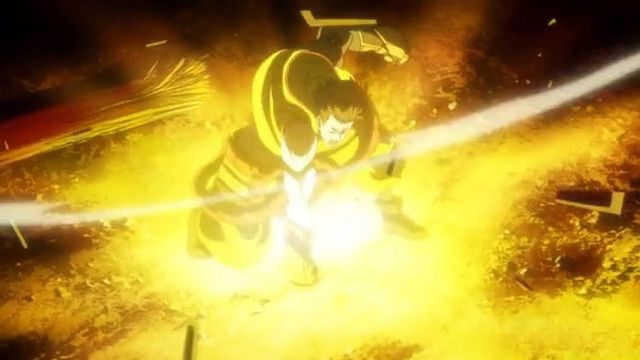 Hanbee sees the glow of Ieyasu's counterattack from his vantage point and panics. At the same time, Mitsunari abandons the defeated Masamune and Kojuurou and dashes back towards his lord. He comes across a fallen Hanbee who tells him to carry on to Hideyoshi. Mitsunari rushes off again after moving Hanbee to safety. 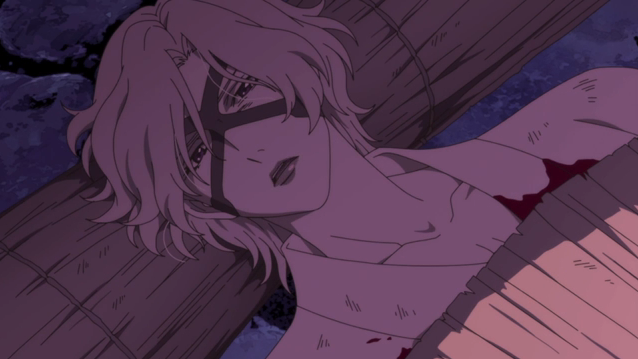 On the way, a wounded soldier reports that Ieyasu has rebelled. Mitsunari strikes him down without a moment of hesitation, saying that Ieyasu isn't that kind of person.

Moments later, Mitsunari is faced with Hideyoshi's broken body. He eventually spots Ieyasu watching over them and confronts him, but he's unable to understand the other man's words. Ieyasu finishes by telling him that this is farewell. He flies away on Tadakatsu, leaving Mitsunari alone with his grief. 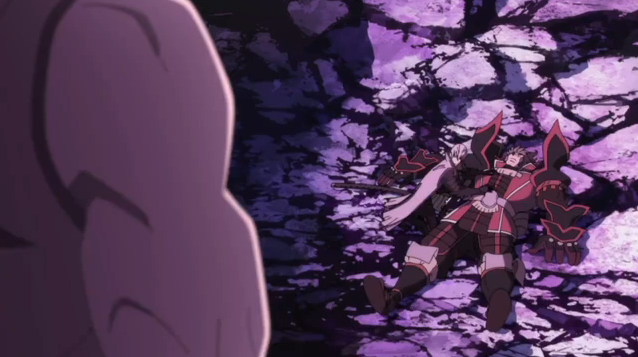 Mitsunari carries Hideyoshi's body back to where he left Hanbee, who treats it as a happy reunion. 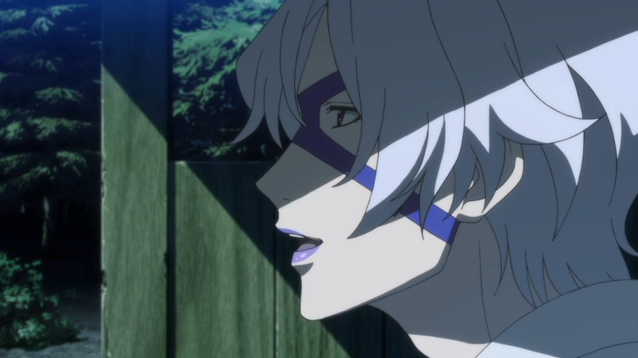 Hanbee's weak voice then fades as he falls to the ground himself, dead. Mitsunari breaks down in horror. 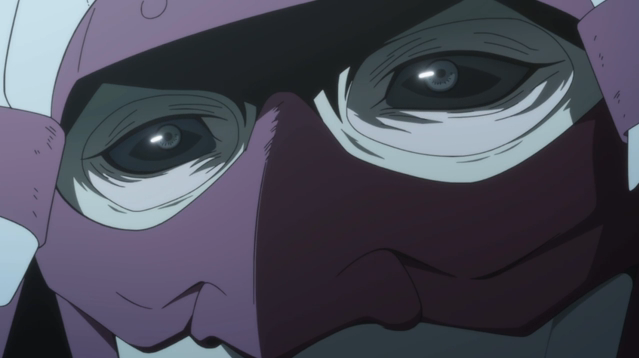 Yoshitsugu calmly watches over Mitsunari as he curses Ieyasu's name, vowing to kill his old friend. 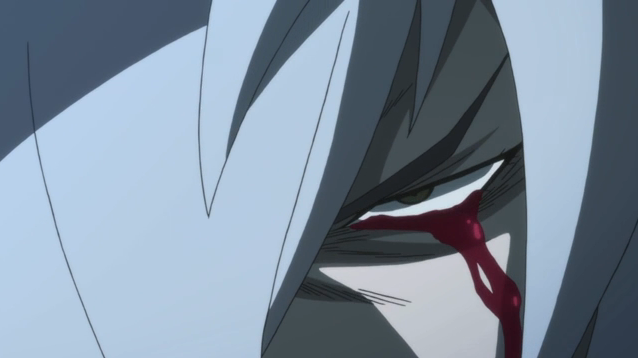 A handful of shots show what's happening elsewhere in Japan. Maeda Keiji appears first; he has a personal history with Hideyoshi so these events will come as a shock to him. 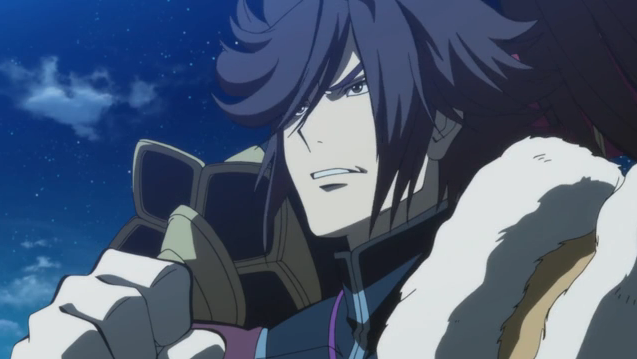 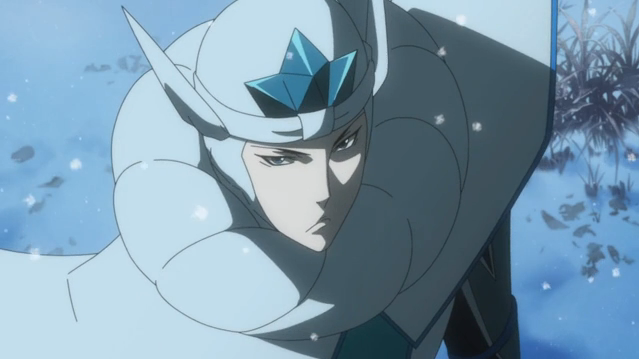 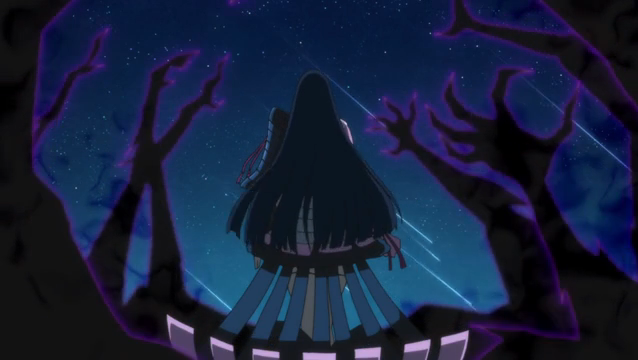 The chipper Kobayakawa 'Kingo' Hideaki, munching on his favourite nabe stew. His advisor Tenkai is standing in the background, looking away at the sky: 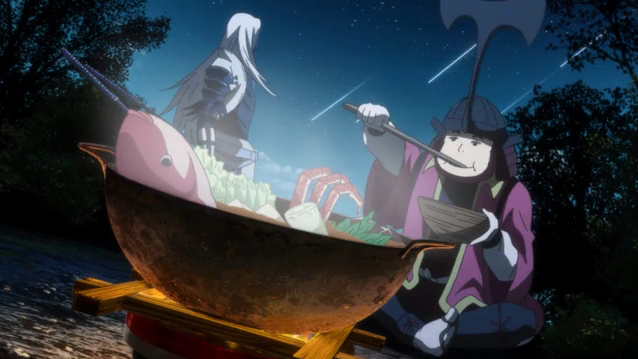 Tsuruhime, a character who didn't appear in the previous anime adaptation: 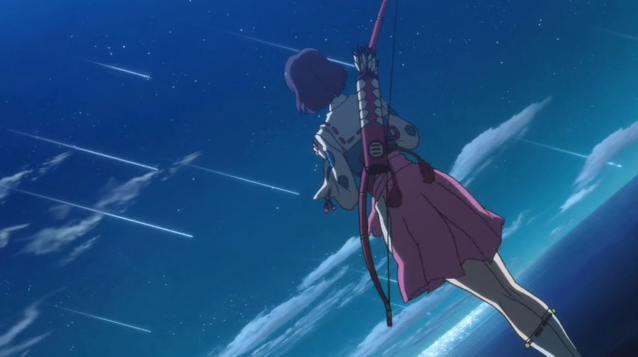 Kuroda Kanbee, another new face for anime-only fans. He seems to be locked away in a cell rather than helping on the battlefield (that's where he was at the beginning of the game): 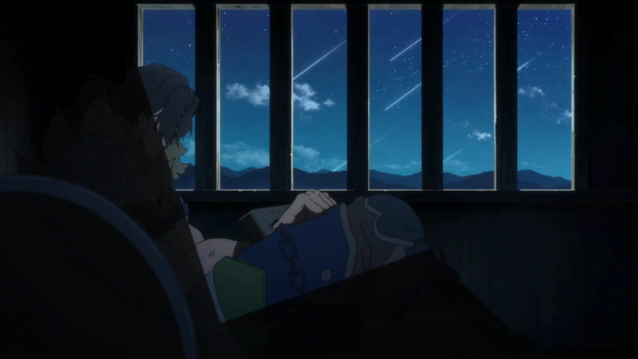 Mouri Motonari, the cunning tactician with a cruel streak: 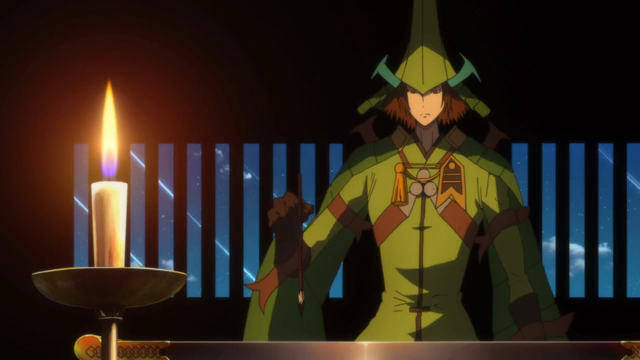 Shimazu Yoshihiro, the grizzled old warrior who appeared in the previous anime: 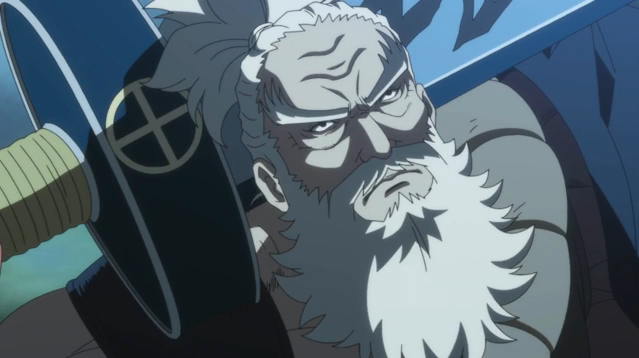 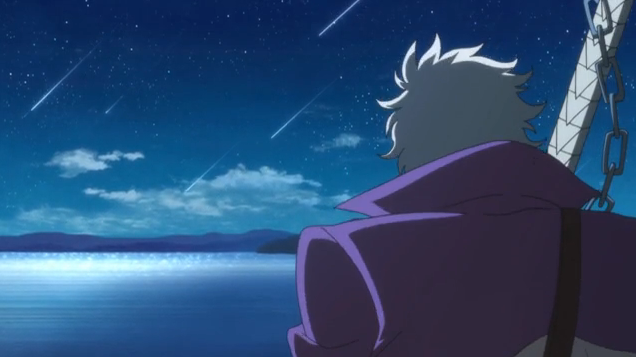 The straggling soldiers from the Date army find Masamune and Kojuurou lying defeated on the ground, forgotten. The episode ends with a splash screen announcing that 100 days remain until the Battle of Sekigahara. 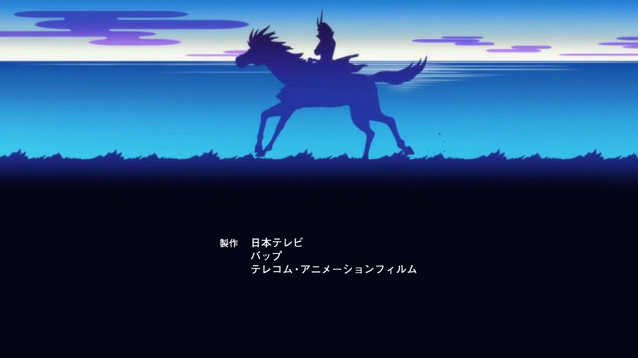 I like the pleasant ending sequence and Ishikawa Chiaki's song, Hokkyokusei ~Polaris~. 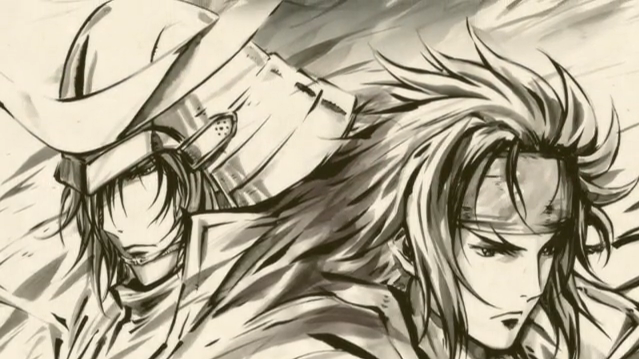