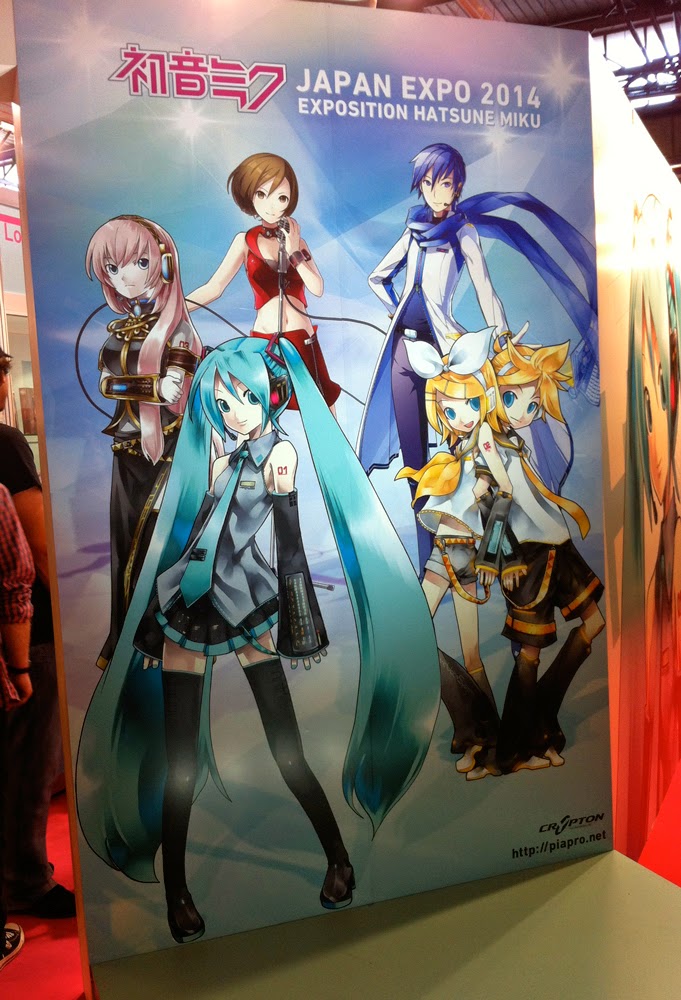 Back when the broadcast details for Sengoku Basara: Judge End were first revealed at the start of June, many fans were amazed to see that the series was going to receive its world premiere at the Japan Expo event in Paris, France - several days before the first Japanese television broadcast. While it's certainly not the first anime title to receive this honour, it's the first time that a series I love this much has debuted at a high profile event somewhere so close to home.

After missing the last London MCM Expo (MCM Comic Con) due to exasperation at the organisation and crowding, I'd been itching to visit a convention for a while. So to cut a long story short, this morning I found myself sitting on a Eurostar train bound for Paris for a very special daytrip.

Unlike the anime industry in the UK, which mostly survives by repackaging content from bigger distributors in the US and Australia, the anime and manga companies over in France seem eternally resilient. France is regarded as the largest market for manga and anime outside of Japan in many respects; indeed, I've often imported DVDs (and VHS tapes) from the continent to fill gaps in my collection when the English-speaking market fails to deliver. Until now I'd made excuses about the potential language barrier and never given the colossal Japan Expo events a chance.

With my Sengoku Basara fever as motivation I decided to stop being a coward. After a smooth journey through the Channel Tunnel the Paris-Nord Villepinte Exhibition Center was just a short train ride away on the RER railway.

I can read French without too many problems but holding a conversation is a challenge. Thankfully the guests and many vendors spoke in Japanese, and the organisers had prepared extensive English-language instructions to help the crowds of fans from other countries navigate the exhibition halls. The moment we stepped out of the RER station it felt as though we'd left Paris and entered another universe; all concerns about understanding the language disappeared in the exciting Japan Expo atmosphere. It was probably one of the most organised events I've ever attended and very foreigner-friendly.

As it was the first day of a five-day convention the doors opened later than usual. Our 'early bird' tickets - which cost just €8 apiece - allowed us to enter an hour earlier than fans who bought their tickets at the venue. After a short wait in the sweltering queue we were inside the exhibition hall by 13:30, giving us plenty of time to explore before it was time to join the queue to watch Sengoku Basara: Judge End at 15:00.

My first impression was that Japan Expo is vast. One day didn't give us enough time to explore all of the attractions even though there was plenty of space to move around and very little queueing.

It was soon time for the most exciting part of the day: the screening of the first episode of Sengoku Basara: Judge End. I'm not going to spoil the actual content here because it seems rude to do that a few days before the proper broadcast become available (click here if you want the spoilers anyway). Anyway, I really enjoyed the episode. While it's definitely got a different feel to Production I.G.'s Sengoku Basara anime adaptation, it's still the hotblooded, melodramatic series I love. 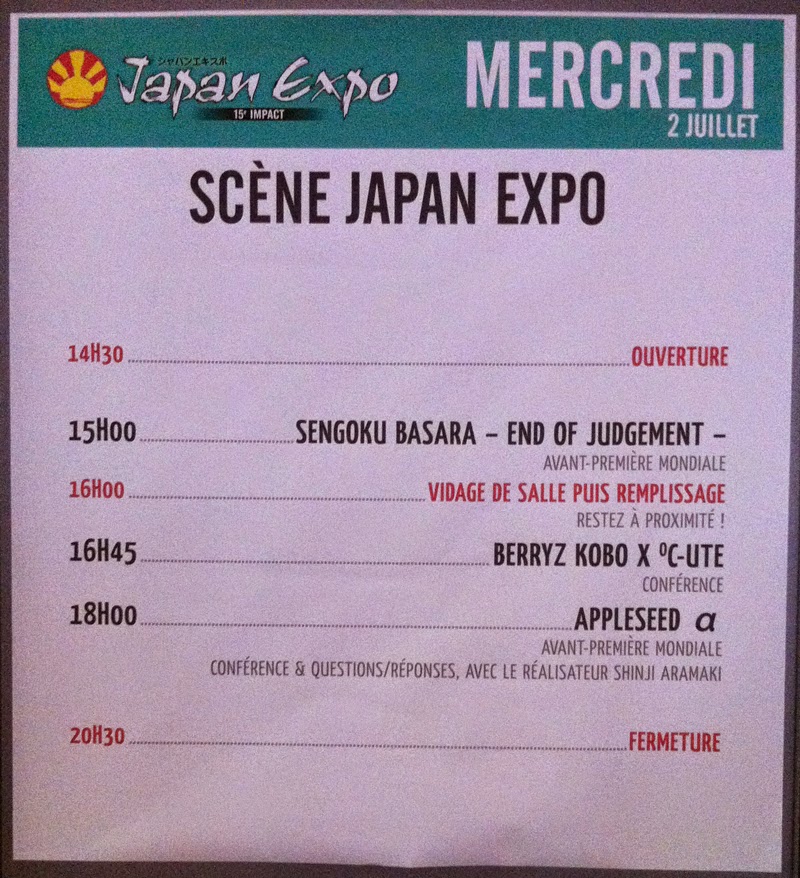 With the main reason for the trip out of the way, it was time to go back into the main halls to explore the rest of what Japan Expo had to offer. There was way too much to describe in detail!

One of the highlights for me was that Yokota Mamoru had rounded up some of his fellow artists to produce a series of illustrations to draw attention to the Souma Nomaoi rally. These drawings were presented as an art gallery titled Musha-e. What was interesting was that there was a wide range of art styles with each person interpreting the theme in their own way. I also liked that many of the artists had chosen to draw famous Sengoku-era commanders...

A full colour art book was available which collected the illustrations. It was definitely worth the €20 to be able to take them home and enjoy them properly.

Naturally, the local French anime and manga distributors were present at the event. The number of official DVD sets was great, but even more impressive was the sheer volume of French-translated manga on offer. There was hardly any Japanese content on sale at all because there are so many companies producing official French translations; I'm seriously jealous!

There was plenty of other content too, from a wrestling ring to a cosplay stage. Fans could even get a rare chance to participate in an Ichiban Kuji lottery drawing to win special Shingeki No Kyojin (Attack On Titan) and Sword Art Online goodies. I liked that most of the stages were in the main event halls; you could get glimpses of martial arts demonstrations or people singing even when you were shopping.

The next scheduled event I wanted to attend was Nakagawa 'Shokotan' Shoko's live mini-concert. I'd assumed she'd be singing on one of the regular stages in the exhibition halls but the separate 'live house' area was a full stage with screens and a professional setup; very nice! Shokotan blasted out her newest songs along with three from Tengen Toppa Gurren Lagann, her ending theme from Fullmetal Alchemist and a medley of classic anime songs which had the crowd singing along. This is the second time I've had the pleasure of seeing Shokotan on stage and her spirited performance was great.

A Japanese-French translator was on stage too to help her communicate with the audience. Most of the people there seemed able to follow Shokotan's slow, clear Japanese without any help, though.

One of the interesting things about visiting any foreign anime convention are the subtle (and not-so-subtle) differences in which series are popular. Big titles like Shingeki No Kyojin (Attack On Titan), Bishoujo Senshi Sailor Moon and One Piece are beloved the world over, of course, but the selection of genres highlighted in Paris definitely had its own distinct flavour, with a lot more support for classics and underrated shows instead of simply concentrating only on the recent big hits. I was thrilled to see the displays promoting titles which struggle to find an audience in English-speaking regions.

I was also pleased to discover that it was quick and easy to buy food within the exhibition hall. London's MCM Expo could learn a thing or two about organisation.

The last activity for the day was a trip to the Cultural Stage to watch Chiba's hyperactive unofficial mascot character Funassyi presenting a talk show. It was wacky and cute!

The RER trains were delayed on the way back, making for a very stressful trip home. As I sat on the train I reflected that Japan Expo is like the UK's MCM Expo/MCM Comic Con, Hyper Japan and the Tokyo International Anime Fair all in one with a truly impressive selection of guests. The organisation was superb and the atmosphere was buzzing from start to finish - it was a real joy to be there.

It's a shame that I had to go straight back to the station to catch the last train home instead of taking a few days off work to enjoy the trip properly. Paris has some great bookstores and the remainder of Japan Expo promised even more entertainment. I'd have quite liked to savour some tasty local food as well! Perhaps next year?
at 1:06:00 am