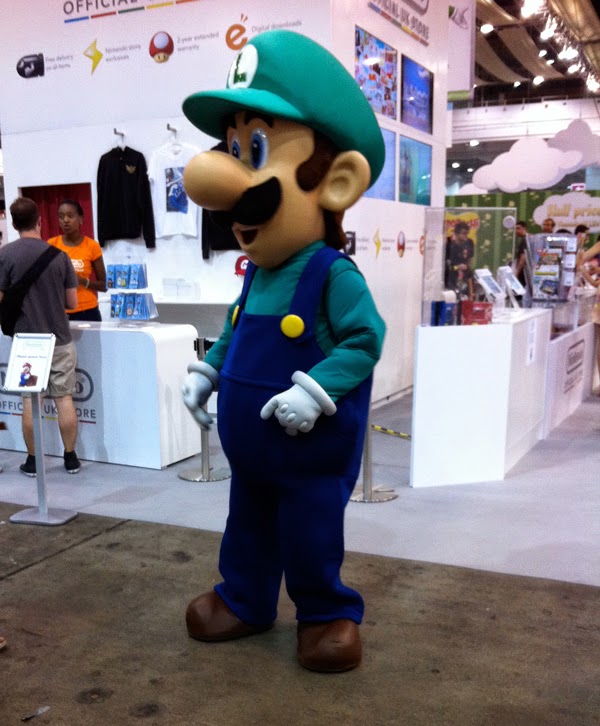 The annual (and sometimes biannual) Hyper Japan event returned to London's Earls Court exhibition centre between 25th and 27th July 2014, so I managed to find time to pop to yesterday's show to see what they had arranged for this year's celebration of Japanese pop culture. Hyper Japan is a unique event which blends Japanese fashion, artwork, games, music, cinema and traditional culture together to allow visitors to get a taste of all kinds of activities in a single venue.

It's popular with young people, naturally, but also with older Londoners who are curious about Japan and expats who want to introduce their favourite traditions to a wider audience. The attendees come from a rich mixture of backgrounds; if the intense atmosphere at MCM Comic Con is too much for you, Hyper Japan tends to offer a much more pleasant, friendly experience.

The first hurdle we were presented with was that the popular Saturday show had been split into two halves this year as an experiment to help ease crowding. The first session ran from 09:15 until 14:15, then the second started at 15:15 and ran all the way until closing time at 20:15. You could buy tickets for both halves of the show, of course, but this would leave you waiting around in a fairly empty part of London for an hour with nothing to do until the event reopened. I wonder how well this experiment worked out.

Judging by the ticket sales on the official website, the Saturday afternoon and Sunday shows were probably the most popular. My group opted for Saturday morning as we wanted to see one of the special guests perform, and it turned out to be a good choice. The crowds weren't too bad at all first thing in the morning so we managed to see everything we wanted to before our session was over.

The fun started straight after we arrived at Earl's Court station. 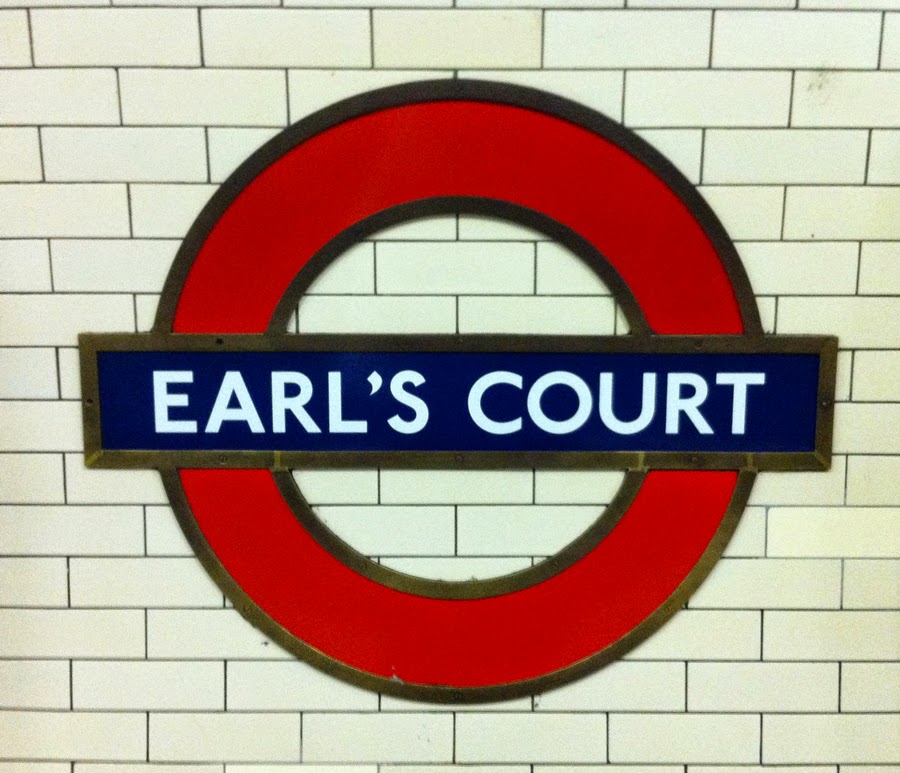 One of the workers at the station is obviously a little cheeky, as the usual train information had been replaced by anime quotes from Lelouch (Code Geass) and Sachiko (NANA). It was a nice touch - even if a troublemaker had changed the word 'glass' to read 'ass' by the time we arrived. 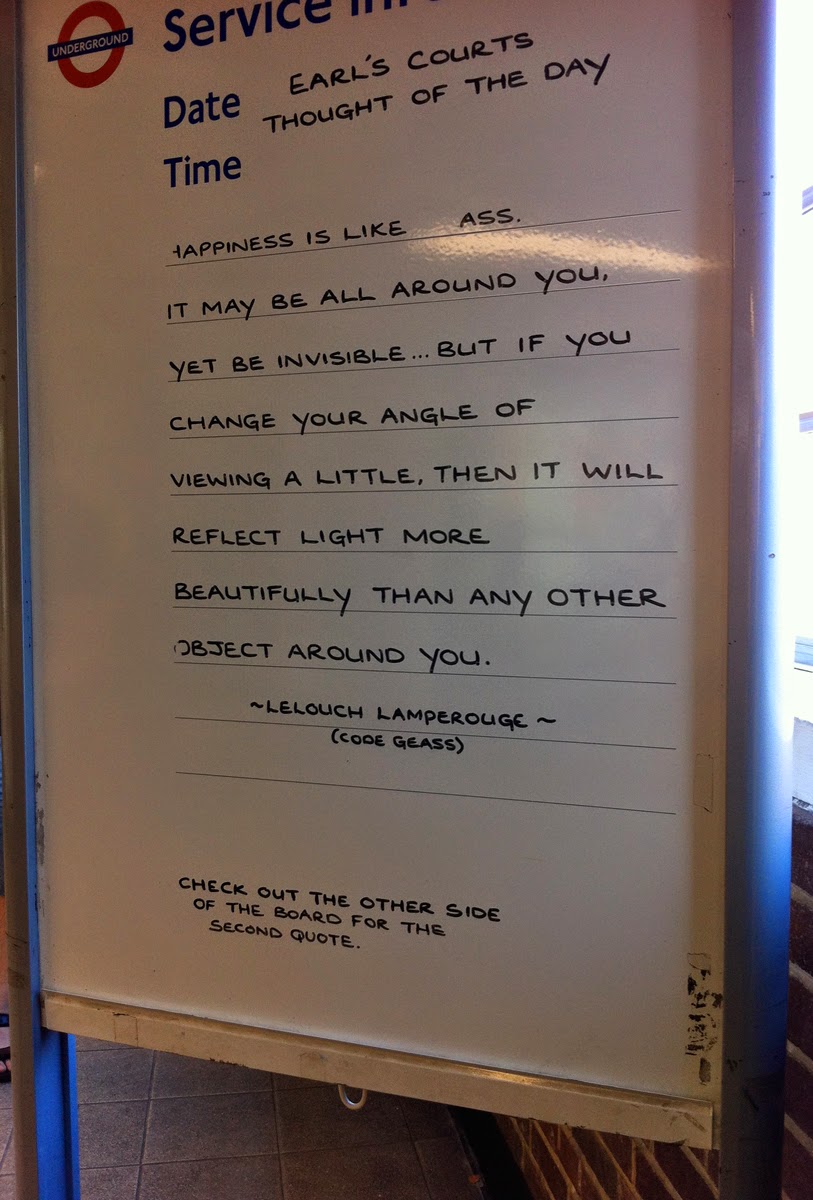 We didn't have early access tickets this time because they'd sold out quite quickly, but arriving 45 minutes before the doors opened meant we were very close to the front of the queue. Thankfully the staff moved the queue into the hall entrance not long after we joined it so we didn't have to wait in the glare of the sun. 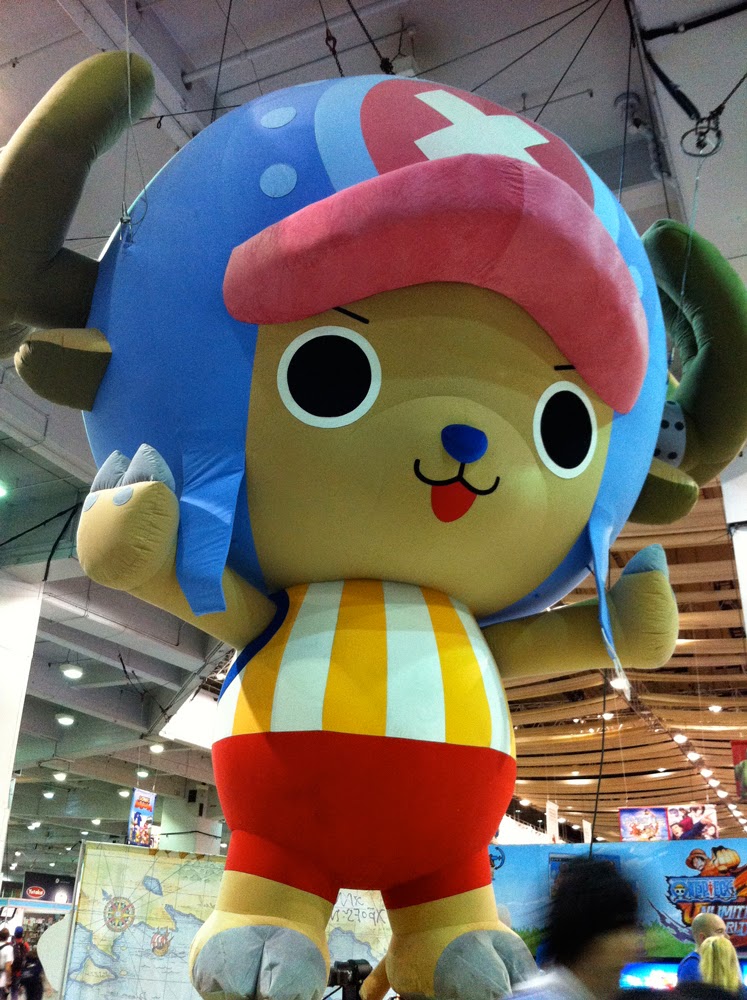 The gaming section was the biggest. Chopper from One Piece loomed above the entrance to the hall from the Bandai Namco/Toei Animation area, which backed onto a similarly enormous Nintendo stand. 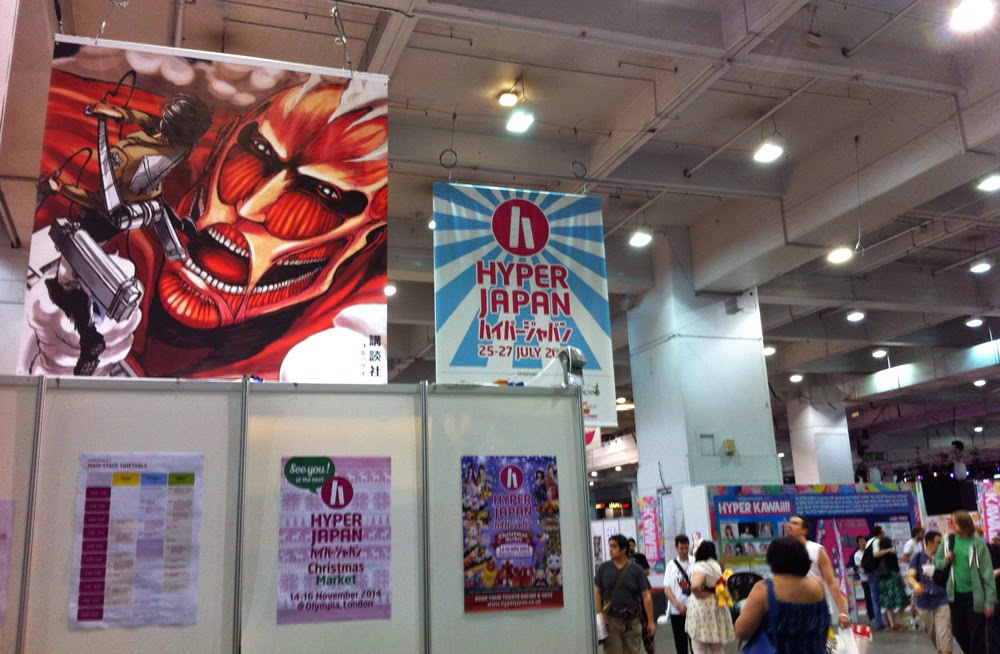 The other main route from the entrance lead past the 'kawaii' area full of fashion and pop culture stands. Since we'd managed to get in so early, my group decided to visit the refreshment area first of all before the crowds made it difficult to buy brunch. The most photogenic of our purchases was this taiyaki from the Yaki Bakery stall. 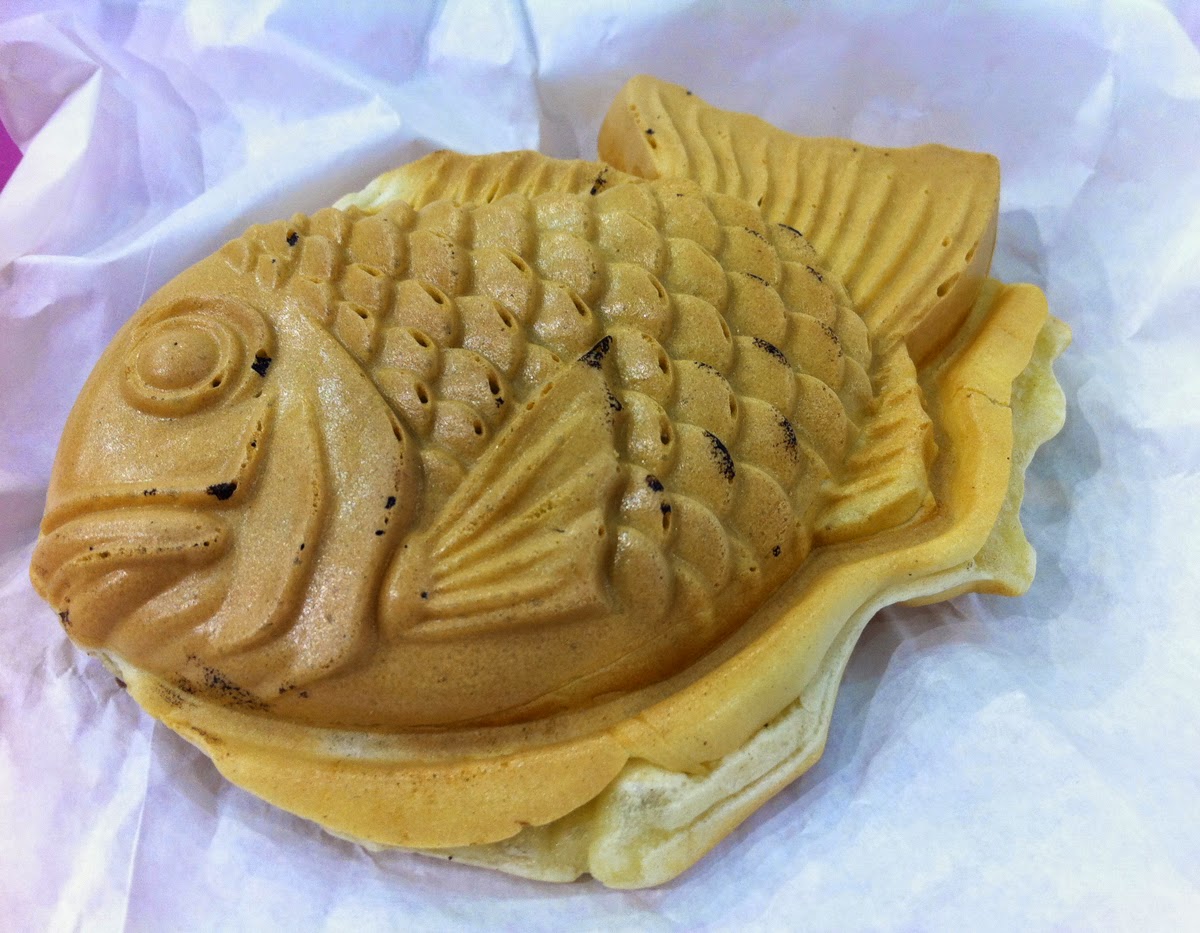 The JP Books booth had a tiny viewing area behind it where fans could check out Gundam Unicorn before buying the multilingual Blu-rays from the main stand. The viewing room seemed like quite a good idea, especially since tired visitors often appreciate a chance to sit down and rest. 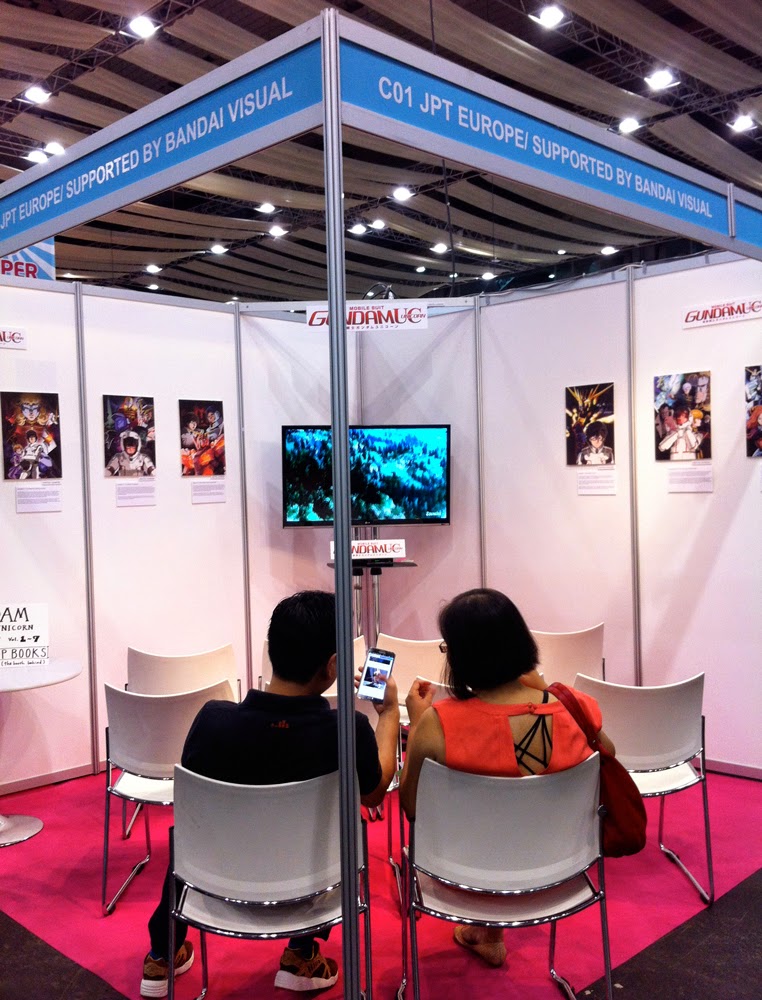 I loved this replica armour on sale at one stand. Unfortunately, its price (£1,000 marked down from £1,950) was rather more than I could afford. 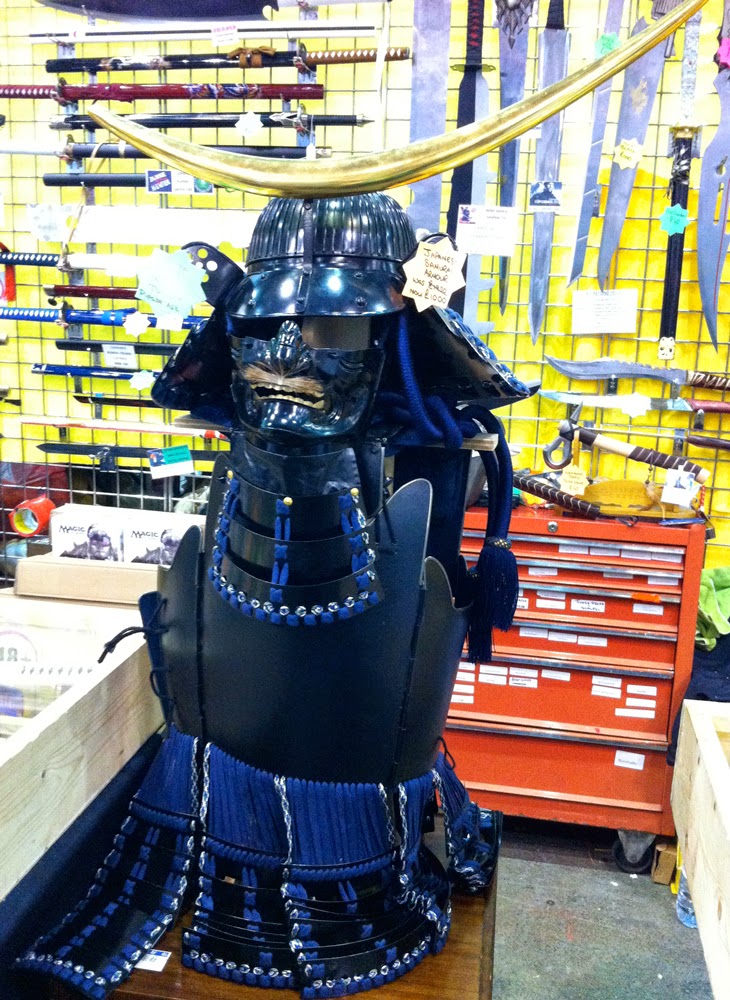 The crowds gradually began to swell as we walked around. The anime and manga merchandise seemed popular, as did Nintendo's stage area where they were presenting their newest titles throughout the day. 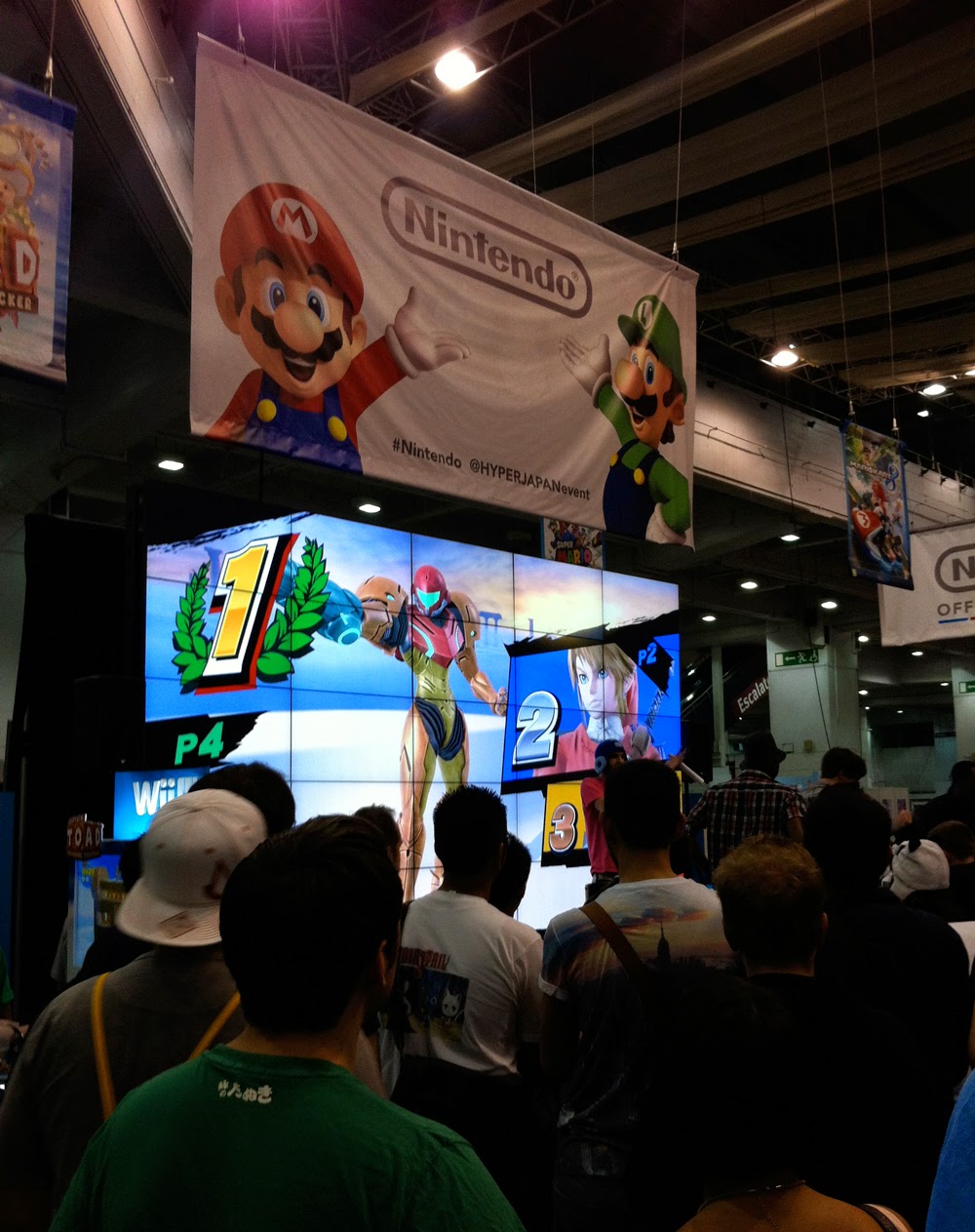 After taking in our fill of the stands we took our seats at the main stage and watched the last half of the first performance. Regrettably the official website never got around to announcing what was planned for the first stage show (it's still billed as 'TBC' on their schedule even now) but it turned out to be a musical performance by Ichikawa Hibiki, the only professional Tsugaru shamisen master in Europe and a regular on the cultural event circuit. We had enjoyed the staccato strumming coming from the stage as we walked around the stalls. 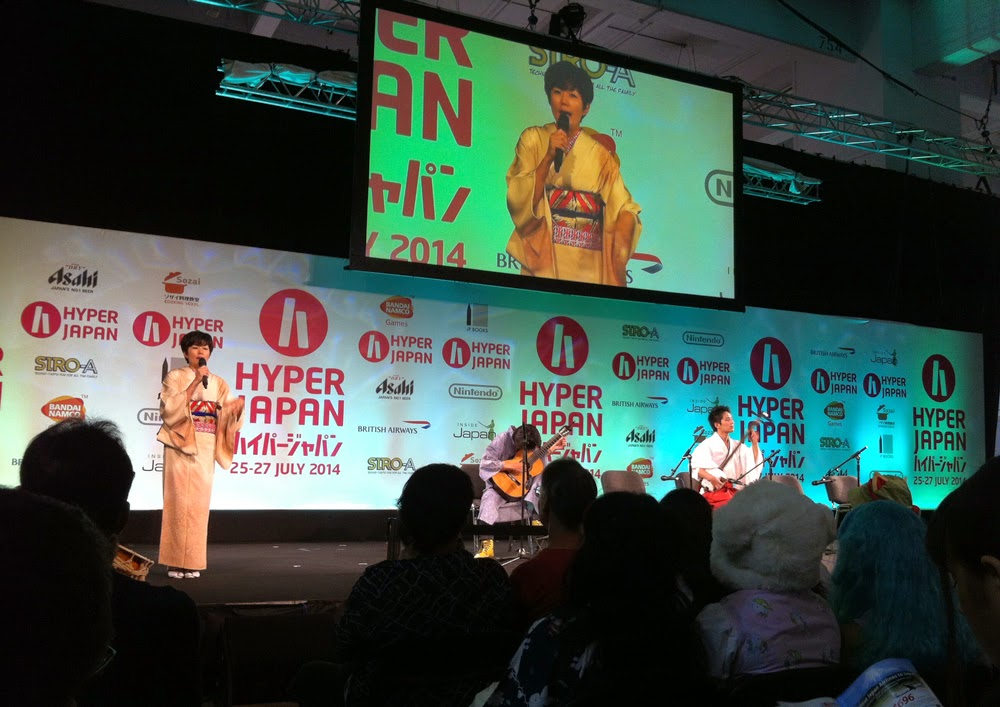 Ichikawa was accompanied by Hide, a guitarist I hadn't seen before. They made an interesting pair; one dressed smartly in hakama and the other grinning in a loose-fitting yukata and yellow boots. Here's a sample of their work together from Hide's YouTube channel.


I'm usually underwhelmed by shamisen performances so I was pleased that they'd arranged to play a variety of styles. We had been able to hear traditional instrumentals and minyou music playing as we walked around the exhibition, then by the time we arrived they'd switched to modern shamisen/guitar duets. The climax of the presentation was a shamisen/guitar cover of Natsukawa Rimi's Nada Sousou with vocals by Mochizuki Akari. I turned around to look behind the seating area during the performance and it was clear that her beautiful singing had attracted a large number of people to the stage.

The next stage event was our main reason for attending Hyper Japan to begin with; a mini-concert from singer Yanagi Nagi. She was very cute and a little shy, asking the audience to call her 'Nagi' as she belted out three songs to a cheering crowd (one person had even brought a glow stick along!). It's a shame that the acoustics in the hall weren't great; her voice was strong and clear but the background music was muffled. I hope she will consider doing a proper full-length concert in the UK one day so we can see her again. 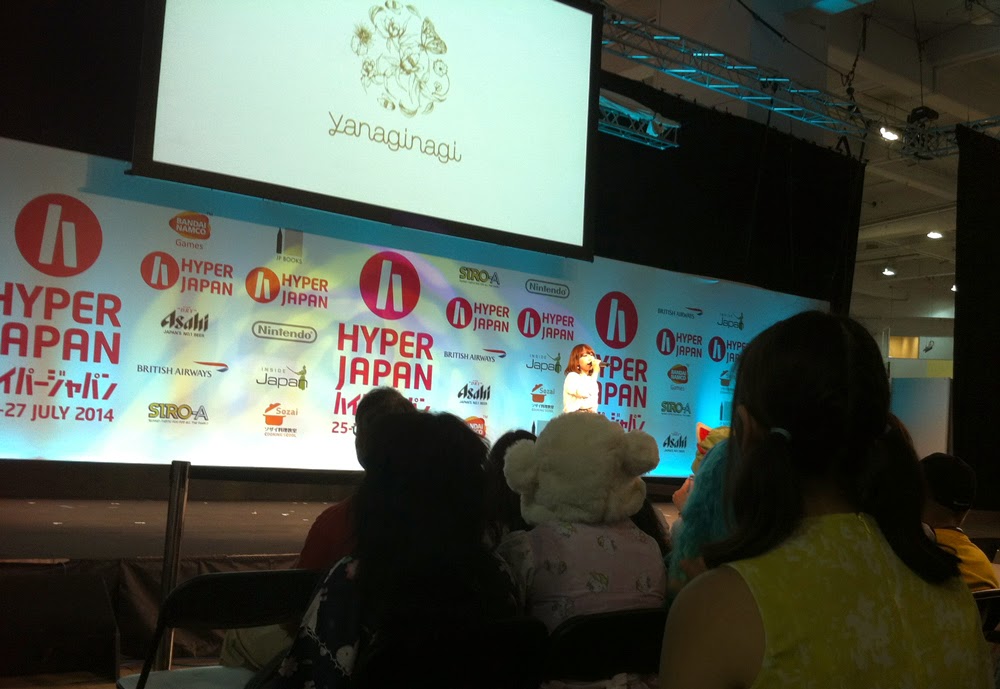 We resisted remaining in the stage area any longer so we never got to see how the tantalising-sounding 'HIROKI: The Masked Ninja' performance turned out. Instead, we headed back into the main hall for some more exploring, and also picked up some shaved ice - a very welcome antidote to the rising temperature in the hall. 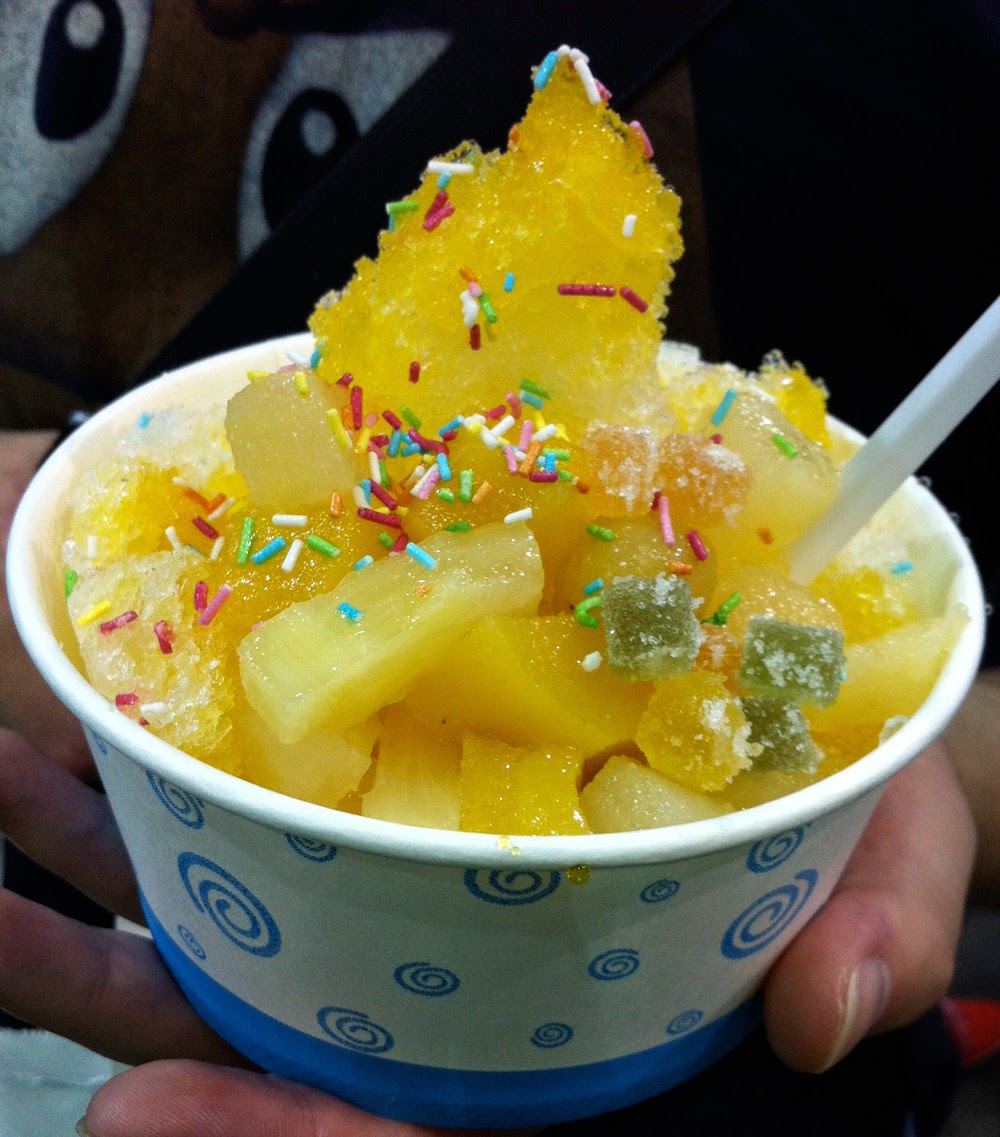 All of the food stalls had long queues by this time, so my group decided we'd look around the exhibitors one last time then head home for the day. 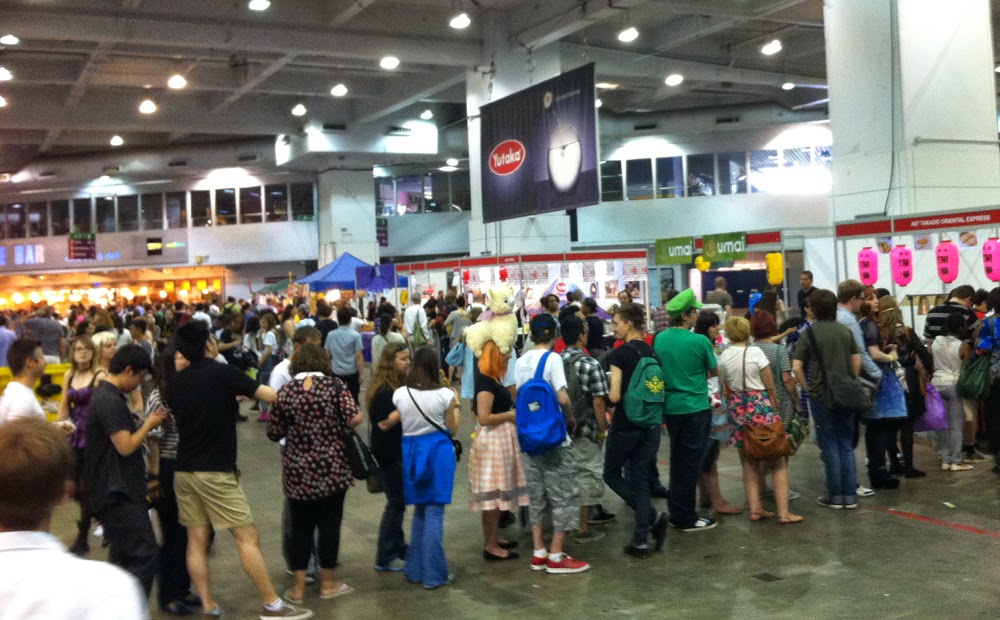 One thing I found odd was that it felt as though there were fewer stands compared to previous years. I can't complain about the variety - there were stands specialising in replicas of traditional Japanese weapons, bonsai trees (!), kimono, martial arts, language lessons, cosplay, modern stage plays, vocaloids, robotics and animation cels - but there were also several empty stands and it felt as though many popular hobbies were underrepresented. I'd have liked to have seen some of the UK's foreign film and anime distributors showing up in person, for example, but I guess they all prefer to stick to the bigger MCM Comic Con events these days.

There's going to be another winter Hyper Japan event this year held between the 14th and 16th of November. I'm hoping that I'll be able to attend that one as there were some very interesting exhibitors the last time we attended one of the Christmas events!
at 5:20:00 pm