Keeping up with all of this news is hard work all of a sudden!

Today's update confirmed another round of characters for the Sengoku Basara Judge End anime - though since they all appear in the first episode I'm not sure how secret this was! The full cast list shown on the website now looks like this (everyone is voiced by the same seiyuu as in the game series):

The character profile page has updated too with some of the designs.

If we assume that the layout is meant to be symmetrical, and account for the fact that there will be one space left once all of the characters above are added, I'm guessing we might be seeing an appearance by everyone's favourite Demon King before the series is over.

Details of the Japanese home video release for Judge End

The VAP website has confirmed the first details of the series' Japanese home video release. There will be four volumes to collect in total:

The first press copies of each volume (both the Blu-ray and DVD editions) will also include an exclusive audio CD with an unbroadcast episode of the new Hoshi Souichirou and Seki Tomokazu's 'Sengoku Basara: Judge End' Radio show. Additional bonus features are to be confirmed.

I've included the Amazon Japan links in case anyone is really impatient, but if you prefer to buy elsewhere I'm sure it will be available elsewhere very soon. Please note that the Japanese home video release probably won't include any subtitles; many fans overseas may prefer to wait for FUNimation's home video edition.

Summaries for the next four episodes of Judge End

As well as releasing the next batch of design sketches, today the Japanese media outlets revealed the stories which will feature in the next four episodes of the show. The reason that the stories are posted in advance is because the mainstream anime magazines publish their television preview guides on the 10th of each month. 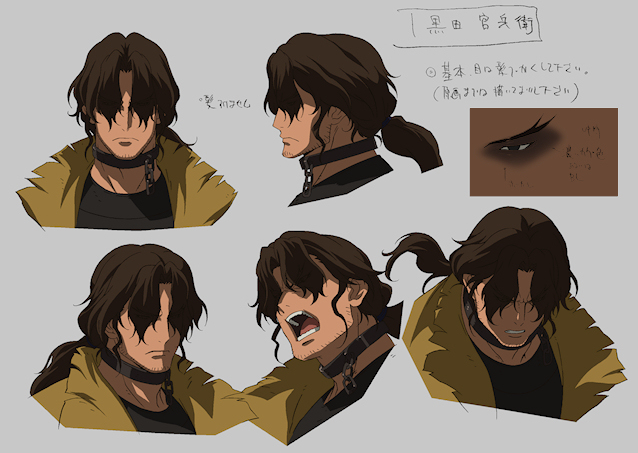 Please be aware that these summaries naturally contain spoilers - especially for viewers who haven't played the games. If that doesn't bother you, click below for details of what we can expect!

The news that Toyotomi Hideyoshi was defeated by Tokugawa Ieyasu has spread throughout the land of Hinomoto (Japan). Ishida Mitsunari has returned to Osaka Castle in despair, vowing to carry out his revenge against Ieyasu.

After attacking Hideyoshi, Ieyasu begins an invasion of the Takeda domain of Kai. The defenders engage the enemy, however, while on the battlefield Sanada Yukimura and Sarutobi Sasuke sense that something isn't right within the Takeda army...

At the same time, after losing to Mitsunari the Date army encroach upon Echigo in order to escape the pursuing Toyotomi forces. The land of Echigo is the territory of the 'God of War', Uesugi Kenshin...

The Saika-shuu is the greatest mercenary group in the Warring States. In order to obtain that power, Ishida Mitsunari heads towards the Saika village.

Meanwhile, declaring that the power of bonds will unite the land of Hinomoto, Tokugawa Ieyasu heads to the Saika village as his first step to forming alliances with the other warlords.

Chousokabe Motochika's land of Shikoku has been devastated by the Tokugawa army. Along with Hideyoshi's former friend, Maeda Keiji, he pursues Ieyasu to the Saika village...

Back in Oushuu, Date Masamune regains consciousness, and at the same time Sanada Yukimura struggles with the loss of Takeda Shingen. What will the future bring for the two of them...?!

Having entered into a contract with the Saika-shuu Maeda Keiji begins to search for Matsu, who is currently missing. Over in Kai, Sanada Yukimura hurtles away towards Echigo and the God of War, Uesugi Kenshin.

Meanwhile, Date Masamune moves towards Osaka Castle with his sights set on Ishida Mitsunari. But Yukimura's Ueda Castle is on the way to Osaka...

In the hope of forming a bond, Tokugawa Ieyasu has gone to meet with Kobayakawa Hideaki. As soon as Mitsunari discovers this, he too heads towards Hideaki. With furious emotions stirring again, a clash seems inevitable...!

Ishida Mitsunari doesn't even remember Date Masamune. The pair's reunion at Ueda Castle becomes the source of even deeper animosity. Yukimura stops Masamune just before he gives into his rage and lashes out, and the uncontrollable feelings of anger make a battle between Masamune and Yukimura unavoidable. Elsewhere, Tsuruhime is searching for Ieyasu, seeing a great darkness in his future.

At the same time, Chousokabe Motochika and Mouri Motonari have moved towards Kyushu to meet with Shimazu Yoshihiro, Kuroda Kanbee and Ootomo Sourin, having been ordered by Yoshitsugu to take control of Kyushu's strength.

The pace is picking up as the world heads towards Sekigahara...!

Edit 10/07/2014: Thank you to Lenievi for pointing out a mistake which messed up the meaning of one line! It's now fixed.

By the way, the character descriptions confirm that Ujimasa definitely did survive the attack on Odawara Castle in the first episode, and Keiji is said to be looking for Matsu, who has been kidnapped. This means the Maeda couple are very likely to appear in the anime. Furthermore, those who have played the game and remember that storyline might pick up on the clue that someone else from Sengoku Basara 3 could be appearing in a future episode...