I'm expecting a great deal of news tomorrow as Capcom have suddenly started hinting that we'll learn more about the game's release at 10:00am via the official Sengoku Basara 4 website, with more details about the Hyakka Ryouran Tamatebako special edition, the full range of store-exclusive bonuses and the first announcements of some special launch events.

This information might be in tomorrow's Weekly Famitsu magazine as well. I would usually translate these magazine articles this evening, but as I haven't heard any indication that they contain Sengoku Basara 4 news this week I was thinking of saving my money. If anyone hears otherwise I'll happily buy it and translate the details as usual.

In the meantime, here's a quick summary of the news from the last few days to spread things out.

Sengoku Basara 4 to be playable at Jump Festa in December

Capcom's tour of major industry events will continue on the weekend before Christmas when they pay a visit to the Jump Festa convention at Chiba's Makuhari Messe on the 21st and 22nd December 2013. Their plans include showing off a playable build of Sengoku Basara 4 and giving some kind of stage presentation. It looks as though Geist Crusher will be there too so we can probably look forward to seeing the hot-blooded Sengoku Basara 4 x Geist Crusher promotional video hundreds of times again in any live stream which might occur.

As the new Butai Sengoku Basara: Kyouou Tanjou x Shinen No Utage ('The Birth Of The Dark King x Feast Of The Abyss') stage play approaches we've been treated to pictures of Houjou Ujimasa (Yamamoto Kenji), Itsuki (Sakai Ran) and Date Masamune (Takigawa Eiji) in costume for the first time courtesy of the official stage play Facebook page. I think they all look great, though I can't wait to see them in action when the DVD edition is released.

Listings have begun to appear for the seventh book in the Kodansha BOX novel series based on Sengoku Basara 3. Details are still sketchy but it appears that Sengoku Basara 3: Sarutobi Sasuke No Shou ('Sarutobi Sasuke Chapter') will be coming out towards the end of November with artwork by Tsutsumi Yoshisada and a story written by Sasahara Shio. The price will be ¥1,470. I hope that we'll get to see the lovely cover artwork soon.

I mentioned more about the release here but we now have the cover artwork for the next instalment of Itou Ryuu's Sengoku Basara 3 Bloody Angel manga. Mitsunari fans can look forward to its release in just over a fortnight. 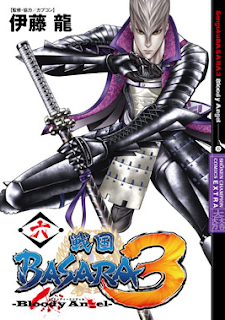