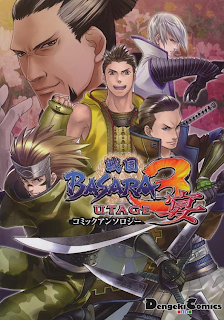 Sengoku Basara 3 Utage Comic Anthology was a 142-page manga anthology released by ASCII Media Works in the Dengeki Comics EX line on 27th January 2012. It costs ¥850 and can be purchased from all good import book stores and manga specialists such as Yesasia, Amazon Japan or CD Japan.

The content inside the book is all themed around the scenarios from the Sengoku Basara 3 Utage game, so characters who didn't appear don't show up here either outside of a few brief cameos. The list of contributors contains names pulled from all over the Sengoku Basara universe, and no less than a third of the pages is composed of 4-panel gag strips. That fits with the theme of the game, I suppose.

The cover illustration depicting the leads from both Sengoku Basara 3 and Sengoku Basara 3 Utage was drawn by Satsuki You. There's additional colour artwork inside from Kyuugou, Yuupon and Katagiri Ikumi. I particularly loved the Yuupon drawing showing Mitsunari and Ieyasu clashing with Hisahide in the background; it was a nice surprise back when I originally bought the book. Here are some very brief summaries of the standalone manga which follow the illustrations.

Inochi ('Life')
Sakura Maro
This manga tells Tenkai's story from the moment Hisahide took away his identity to his original encounter with the crybaby Kingo (via Sourin's unsuccessful attempt at recruitment). Though the story is told in a silly way the themes are still quite serious, so Sakura Maro ends the story with a few pages of 4-koma jokes about the female characters with the heading Oiroke Taiketsu ('Sexy Confrontation') to lighten the mood.

Omoi Hitokuchi ('Bite-size Feelings')
Hayashida Kyo
Another story about Tenkai, this time from Kingo's perspective. He tries to bond with his mysterious companion in the smallest of ways by sharing some tasty nabe with him. Two pages of 4-koma poking fun at the gameplay in Sengoku Basara 3 Utage are included as well - even the Oushuu radio announcer shows up!

Michibiki No Star Mine ('Leading Star Mine')
Ohori Yutaka
A star mine is a type of firework arrangement. In this chapter, Sourin drags Muneshige around on one of their many recruitment missions. His first (and only) would-be victim this time is Oichi, to whom he promises the coveted baptismal name of Francis-ko and all kinds of rewards. Unfortunately for Sourin, Oichi is no ordinary girl.

Hito No Enishi Ha Ito Wokashi ('People's Destinies Are Fascinating')
Kuromura Moto
Sourin drops in on Mitsunari (literally) and the two end up squabbling furiously about the admirable qualities of their favourite people - Xavi and Hideyoshi, respectively. It's up to Gyoubu, Muneshige and Keiji to calm them down as the fight escalates.

Motochika Karyoku Tanbouki ('The Motochika Thermal Power Investigation Report')
Migo
Motochika is deeply shocked after losing a match to Tsuruhime, and travels around looking for a new source of power. He tries asking the Western Army for help and memorably dons a flamboyant moustache like Yoshiaki's as part of his quest.

Nabe Paati De Let's Party! ('Let's Party With A Hotpot Party!')
Re-ichi
Kingo and Tenkai visit Oushuu to enjoy some nabe with Kojuurou's wonderful vegetables. Masamune and Tenkai end up disrupting the peaceful food preparations, so they're forced to stand and watch as the other two chop ingredients. Since Masamune doesn't know the meaning of patience, he and Tenkai decide to try helping with the cooking in secret...

Oidemase Honnouji! ('Come Along To Honnouji!')
Hanio
Masamune crashes into the middle of a conversation between Nobunaga and Hisahide wanting to participate in their private tea party. Hisahide sees it as an opportunity to be his usual unreasonable self. Unfortunately, when it comes to tea, Yoshiaki is never far away... wait, could all of this mayhem be the secret trigger for the game's Incident at Honnouji stage?

Tomikuji Hajimemashita ('The Lottery Began')
Taki Hiromu
'King of Misfortune' Mitsunari heads to the Basara-ya shop to try his luck in the lottery against the odds. Gyoubu, Kanbee, Sasuke and Yukimura help make his visit more memorable for all of the wrong reasons.

Kanwa Kyuudai ('Back on topic...')
Akiwo
Kojuurou and Sasuke are embroiled in a heated discussion until Yukimura wanders in to contribute his insightful analysis of the topic. The serious mood is ruined within moments.

Mata Kimashita. ('I came again.')
Kyunkichi
A very short story showing the early days of the alliance between the Date forces and Tokugawa Ieyasu, along with some bruised feelings caused by a certain commander's garden invasion. The last few pages of this chapter are filled with 4-koma comics.

Tenka Futouitsu ('Disunification Of The Land')
S. Kosugi
Hana Yori Sengoku ('Sengoku Over Flowers')
Sakazaki May
Sengoku Rajio ('Sengoku Radio')
Sorano
Oishii Ha Seigi! ('Tasty Is Right!')
Osakana.K.D
Ai Wo Utaimashou, Katarimashou ('Let's Sing And Speak Of Love')
Hakyu Shou
Matsuri Da! Utage Da! ('A Festival! A Party!')
Kohtake Hiroyoshi
There six chapters are all collections of 4-koma comic strips parodying stories and scenarios from the game. Sasuke telling Yukimura off seems to come up in almost every single batch of jokes; fans seem to have enjoyed the scene where he slaps his master in the game.

This book isn't my favourite of the various anthology comics. Part of the reason is the relatively narrow focus on the cast of Sengoku Basara 3 Utage - while I love playing as the characters and seeing them in the game, several of the leads are (deliberately) quite unpleasant and the ones I like most have more serious, realistic stories which don't lend themselves well to parody. Even amongst the main Utage characters there's not much balance, either; Sourin and Tenkai seem to get far more attention than Muneshige or Yoshiaki. The anthology could probably have used a splash of straightforward over-the-top heroism in between the darker content and slapstick comedy to give it a true 'Basara' feel.

The other notable thing about this book is that I'm less familiar with some of the contributors than usual. On the other hand, including so many illustrators with different styles keeps things interesting - it's just a shame that a large number of the artists aren't able to show off their talents outside of the 4-panel gag strip format.

Anthologies are always a mixed bag for collectors; if you're looking for a collection of short manga about the rarely-seen Sengoku Basara 3 Utage characters, this is the book for you. If, however, you can only buy one Sengoku Basara anthology and have a soft spot for the older characters, I'd probably recommend one of the older books in its place.
at 4:10:00 pm