As well as the character information I posted about earlier, the official website's update this morning also brought with it the third Sengoku Basara 4 promotional video, which can be viewed on YouTube if Capcom's player is too slow. I've embedded the YouTube version but the one on the official website has SCANDAL's Runners high song instead of the background music so it's worth watching both!

The new video has new footage of Shikanosuke and Matabee as well as a lot of little hints so I'm going to watch it more after work. It looks as though Sasuke's Basara-e Giga Basara artwork is a group of monkeys with the two-character title sarumai ('monkey dance'). I talked about Yukimura's already. 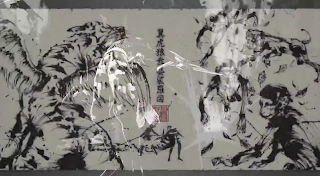 I'm not entirely sure what's going on in the Toyotomi one. Hideyoshi's picture appears to be his usual gourd (which I didn't see at all until Balder mentioned it) and the ink splashing from it resembles a map of Japan. The detail in Hanbee's image on the right is difficult to make out but it must be a reference to Inabayama Castle. Anyway, Hideyoshi's two-character description in the middle of the picture is taikou, one of his real-life titles, while Hanbee's seems to be shichisho ('seven writings') which I believe refers to the seven military classics he was said to have mastered. 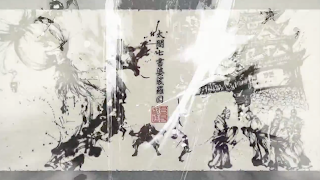 
Lastly, the official cover art is now confirmed below and the final Sengoku Basara Eiyuu No Kai fan club newsletter is shipping. There's a lot of new information to digest. 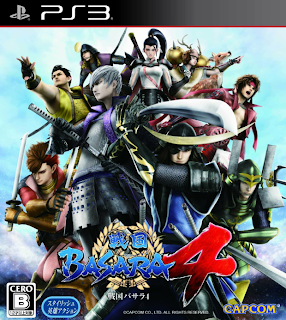 Coverage is available from Famitsu, 4Gamer, Dengeki and Gamer.
at 10:32:00 am