A few hints were dropped that there was still more to reveal about the special edition version of Sengoku Basara 4 and we've now got a beautiful preview of all of the bonus items on the e-Capcom website.

Storyboarding and animation direction is credited to Sessha Gorou. Event scenes were storyboarded by Oohata Kouichi and production was handled by Anima. In addition, Yamamoto Mika worked with Ookubo on the alternate costume designs and anime director Araki Tetsurou assisted with planning the poses.

Ookubo's designs will be included in the game's special edition book Sengoku Basara 4 Bushou Hiden No Sho (detailed below) along with creator interviews. The members of CLAMP - famous manga artists and self-confessed Sengoku Basara fans - have drawn Masamune, Mitsunari, Sakon and Katsuie for the book as well as their favourite characters.

Just as promised, Capcom revealed their full range of Sengoku Basara 4 store-exclusive bonus items this morning, allowing buyers to make an informed decision about the best place to pick up their copy. The release date is 23rd January 2013. 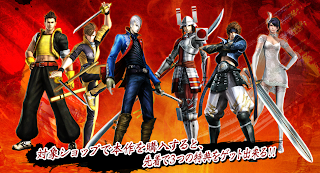 As this is going to get confusing otherwise, I'm going to recap every possible known way to buy the Japanese edition of Sengoku Basara 4 in this post even though I've covered it before. The newest information will be placed at the bottom of the list. If you need any help finding the best way to order please leave a comment and I'll try to assist!

Firstly, there are two main versions of the game available for purchase, the standard edition and the Hyakka Ryouran Tamatebako special edition. I'll list the places I know which stock the item.

The standard edition only contains the game. The first press includes a code for the special DLC costume for Date Masamune (hakama/wooden sword). 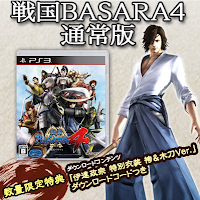 As well as the game itself, this special edition contains a 100-page Sengoku Basara 4 storyboard collection, an 80-page hardcover A4 book about the commanders titled 'Sengoku Basara 4 Bushou Hiden No Sho', a special Masamune jacket (sleeve) for the game and a golden-coloured Masamune custom theme for your PS3, presented in a special box. The first press includes a code for the special DLC costume for Date Masamune (hakama/wooden sword). 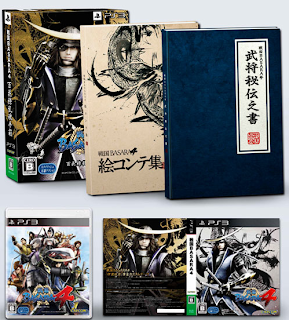 Next come the store exclusive bonuses. The store exclusive sets will include the same items listed above, including the DLC code for Date Masamune's special costume (hakama/wooden sword) if you order in time to receive the first press.

e-Capcom doesn't accept credit cards issued overseas so fortunately Play-Asia is able to obtain the Giga sets upon request. If Play-Asia stop accepting orders, foreign fans will need to use a deputy service. 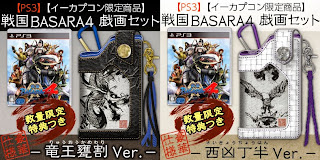 HMV Japan is run by Lawson, so this version is available in HMV stores and also through the special Loppi machines installed in convenience stores all over Japan. Fans who place their Sengoku Basara 4 order through HMV's website or the Loppi system before 17th January 2014 will be eligible to receive a special DLC code for Ii Naotora's wedding outfit and an exclusive Naotora jacket (sleeve) for the game. Unlike the other sleeves, this one has been drawn in the style of the anime.

HMV ship worldwide and have an English-language version of their website. There are listings for both the standard edition and the Hyakka Ryouran Tamatebako limited edition. Please note that at this time only the Japanese-language listings show the exclusive Naotora DLC. I have contacted HMV asking them to confirm that they're shipping the exclusive DLC codes to foreign buyers as well, and I've been promised an answer once they've checked with their product specialist.

Fans who place their Sengoku Basara 4 order through either Edion (limited edition) or Joushin Denki (limited edition) will receive a special DLC code for Ishida Mitsunari's 'DMC Vergil' outfit and an exclusive Mitsunari jacket (sleeve) for the game.

Update: If you're having trouble ordering from Joushin Denki you can use their store on Rakuten's Global website (standard edition and limited edition). There's an option to use international forwarding if you can't have it shipped to your home address directly.

Fans who place their Sengoku Basara 4 order through either Amazon Japan (limited edition) or Furuhon Ichiba will receive a special DLC code for Shibata Katsuie's 'Absolute Justice' Azai Nagamasa-themed outfit and an exclusive Katsuie jacket (sleeve) for the game.

Note: GEO can be a little confusing but you can order through this website (you'll probably need to use a deputy service) to get either Yukimura with the standard edition or Yukimura with the Hyakka Ryouran Tamatebako special edition.

Lastly, fans who order through Yodobashi Camera (limited edition) or e-Capcom will receive a special DLC code for Tokugawa Ieyasu's Gakuen Basara school uniform and an exclusive Ieyasu jacket (sleeve) for the game. In the case of e-Capcom, this offer applies to all four versions they sell. The shot of the jacket apparently confirms that Ieyasu's Basara-e artwork depicts a sun (and a tanuki beneath it!?).

For those who aren't familiar with Gakuen Basara, it's an official Capcom manga anthology series which recently published its sixth volume. All of the Sengoku Basara characters are reimagined as disruptive students at a school run by Oda Nobunaga. 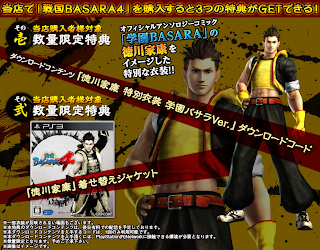 The DLC codes apply to either version of the game (or all four in the case of e-Capcom), but quantities are limited to first-come, first-serve. There are plans to make the costume DLC available later on as a paid PSN download.

Press coverage has also appeared, with articles and pictures on Famitsu, Dengeki Online and 4Gamer. 4Gamer posted another article showing some of last week's new enemy formations as well.

The fan club lottery for tickets begins tomorrow so there's a little more news about January's Basara Matsuri event to get people excited (even though it's going to sell out ridiculously quickly either way). Seiyuu guests Okiayu Ryoutarou (Toyotomi Hideyoshi) and Ikeda Shuuichi (Ashikaga Yoshiteru) will be joining the line-up!

MyCapcom updates with a Sakon play report and some Q&A

Game director Yamamoto Makoto has been answering questions on MyCapcom's Tokusei Kawaraban fan page and there's also a Sakon gameplay report. The pictures are very small and I didn't notice anything new; it uses the same TGS demo version of the game we've seen plenty of times already.

YamamotoD's remarks include a discussion about the gambling theme of Sengoku Basara 4 which was his first solid idea when he was coming up with the game. The colours worn by Katsuie and Sakon are probably meant to recall the black/red of roulette along with Yoshiteru's twirling baton and general casino imagery (it's important to remember here that Katsuie is officially not coloured green but an iridescent hue which shines green in some kinds of light and black in others).

MyCapcom requires a login. I described how to create one with a walkthrough in an earlier post.