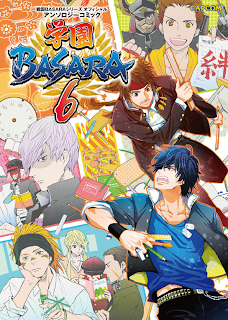 The 164-page Sengoku Basara Series Official Anthology Comic: Gakuen Basara 6 was released on 28th September 2013 priced at ¥1,029. Gakuen Basara 6 can be purchased from all good import bookstores such as Yesasia, Amazon Japan (also available on Kindle) and CD Japan.

Although Yoshimoto, Xavi, Shingen and Kennyo are missing from the character introduction pages they're present in the book itself from the outset; the cast is just so big that they can't fit everyone in at the beginning any more. Everyone from the first game through to Sengoku Basara 3 Utage is included somewhere, even down to Kanetsugu and the Miyoshi Sanninshuu.

As usual, the cover artwork is provided by Nari and it's very colourful, especially on the back of the book where contrasting pastel shades give the picture a stylish feel. The colour illustrations inside were drawn by series regulars Kyuugou and ENU. They're accompanied by the textless version of the cover illustration so that it can be appreciated properly.

The theme of this issue is school tests.

Haran No Makuake (A Turbulent Curtain Rises)
Arai Karo
There's panic in the Gakuen Basara staff room when the latest test results arrive; they're dreadful, and it looks as though both the pupils and the teachers themselves are going to be in a lot of trouble when chairman Oda Nobunaga finds out. That is, if he finds out. Unfortunately, vice principal Matsunaga Hisahide wastes no time in reporting the news to Nobunaga to stir up trouble; it's only thanks to Magoichi-sensei's quick thinking that the school isn't destroyed on the spot, and if the students don't pass the next tests everyone will be punished! This is the usual quick-fire introductory chapter which sets the scene for the rest of the book.

Toyotomi-shiki Suugaku Kouza (The Toyotomi-style Maths Course)
Sanjou Kiiro
Hanbee is helping out by teaching mathematics. Sadly Masamune is far too full of confidence to pay attention to the lesson and Mitsunari is freaking out over his lack of respect. Since Hanbee is rather strict too, he ends up doling out a series of weird punishments which force Masamune to choose between paying tribute to Hideyoshi or cleaning up the school while the other two swoon over their beloved lord.

Kashikoku Kosoku Ni Suteki Shinshi (Cleverly Underhanded: A Splendid Gentleman)
Yanagi Batoshirou
Yukimura, Keiji, Kanbee and Motonari all find themselves ejected from Yoshiaki's classroom before they can prepare for the next test because of their disruptive behaviour. The unlikely team race around to try and learn more about what it means to be a 'splendid gentleman' before it's too late. In the end, it looks as though they're going to have to rely on Sasuke's sneaking to give themselves a most ungentlemanly advantage.

Gekitotsu! Toshoshitsu No Nawabari Arasoi (Clash! The Library Room Turf War)
Koutake Hiroyoshi
Kojuurou is trying to study diligently in the library. He's doing well until Anegakouji Yoritsuna completely distracts him from his work, and things somehow escalate (as they so often do) into a three-way battle between Kojuurou, Yoritsuna and Motochika on the subject of growing plants. There are only three days left until Nobunaga's test...

LET'S STUDY! ...Aittenanda? (LET'S STUDY! ...What Is Love?)
Mikami
It seems that English isn't Yukimura's strongest subject and he's struggling tremendously as he tries to improve. Fortunately there's someone not far away who can help him, and Masamune proudly begins teaching Yukimura, Hideyoshi and Hanbee the finer points of English pronunciation (Hideyoshi makes an unexpectedly gracious student). It doesn't take long for Sourin to try to join in along with Xavi and all his followers, sabotaging the chance that anyone might actually learn something.

Hisshuu: Kizuna [Rinri] Gaku (Compulsory Subject: The Study Of Bonds [Ethics])
Danbo
Ieyasu and Tsuruhime team up to work out why Mitsunari and Ranmaru score so poorly in ethics when they have such strong bonds with their respective masters. Neither of them is happy about being lectured by their fellow students and all of the scenarios they're presented with end up with them taking matters into their own hands. It turns out that both Mitsunari and Ranmaru stop caring about the law (and other human beings) the moment their masters need their help in some convoluted, imaginary way. Is it going to be possible to reform these two miscreants in time for the test?

Seishun Nekketsu, Daifunka!! (The Hot-Bloodedness Of Youth: Violent Eruption!!)
Toriumi Mihoko
Mitsunari orders Yukimura to give Kingo and Gyoubu special training to improve their performance in physical education. Kingo's laziness makes him a target right from the beginning, but when he tries to get Gyoubu in trouble too he has to pay the price. Yukimura is too impressed by their techniques to attempt to stop the two of them from fighting.

Kanningu Daisakusen (The Great Cheating Strategy)
Sanorin
Keiji, Hirotsuna and Musashi discover that they're all far too easily distracted to have a hope of passing any of their tests by studying normally. The only solution is to cheat as elaborately as possible - that is, until Ujimasa and Kotarou meddle in their plans. Will the three of them succeed, or will they end up being hunted down by the entire student body for failing the tests and causing the destruction of the school?!

Kiyou-san To Bukiyou-san (Mr Dexterous And Mr Clumsy)
Maki
Kenshin asks Kasuga to help Yoshishige with a sewing assignment, so Sasuke tags along to make a nuisance of himself and harass her. Yoshishige is just as clumsy with a needle and thread as he is on the battlefield and school doctor Tenkai has to patch up his wounds. Tenkai's surprisingly effective needlework skills lead to an impromptu battle with Kasuga to determine whose prowess is greater.

Ressun Kaishi! (The Lesson Begins!)
Yonata
Oichi is worried that she won't be able to sing loudly enough to get a good score in her music class, so she and Nagamasa team up with the Maeda couple. As Toshiie is also sorely in need of extra practice, Matsu manages to persuade Motonari to try to nurture her partner's sense of rhythm while Yukimura helps out by encouraging Oichi to make as much noise as he does. It all goes wrong very quickly once Oichi discovers the power of a microphone and summons her black hands, swiftly attracting the attention of the school's terrifying head teacher.

Kizuna No Chikara (The Power Of Bonds)
Arai Karo
It's time for everyone's hard work to finally pay off! The students are shocked when Ieyasu gets into trouble at the last minute by trying to help Kanbee with a personal matter. Hisahide is about to punish him (and everyone else) when Magoichi and Nouhime suddenly rush out to confront the assistant head teacher - it seems that the poor results at the start of the story were actually faked by a certain member of staff! Nobunaga is not amused by the deputy's hobby of toying with his school.

As well as a chapter of the manga, Gakuen Basara newcomer Sanjou Kiiro provides eight 4-panel comic inserted between the short stories as bonus features. These replace the character profiles and report cards used in earlier volumes; the final batches of report cards at the start of this book include a particularly spiteful match-up where poor Muneshige is forced to risk his life by grading his own master.

The rest of the contributors are familiar participants in the Gakuen Basara series with Sanorin, Yanagi Batoshirou and Arai Karo having been regulars since the early days. My favourite stories were the ones starring Kasuga and Ranmaru.

This volume never quite gets as funny as Gakuen Basara 5, which was the most hilarious yet, but it's still a very pleasant dose of alternate universe comedy with the Sengoku Basara characters. It's amusing to note that there is actually more teamwork and camaraderie on display in this book than in the previous one, even though that one had team sports as its theme. It seems that a threat from Nobunaga himself is required to force the unruly students and teachers to work together towards a common goal!
at 1:11:00 am