Seiyuu guests are announced for the Machi Asobi stage presentation

I mentioned before that series producer KobaP was going to give two Sengoku Basara stage presentations at the Machi Asobi show in Tokushima. More details have now been announced including a list of the guests who will be joining him live on stage. For the presentation on 13:00 on 12th October, the theme is the Sengoku Basara 4 x Geist Crusher collaboration so the guest is an actor from the other game series, Takase Yasuyuki. Whether that's of interest to series fans is debatable, however the second presentation on 13th October at 14:30 will feature an appearance by Ishino Ryuuzou, better known as the voice of Chousokabe Motochika! This ties in with the location as Chousokabe is associated with the Shikoku area.

The wording on the official site is as good as a formal announcement that Aniki will be involved in Sengoku Basara 4. Could this mean that the Setouchi pair will be formally joining the Sengoku Basara 4 roster in a magazine article soon? 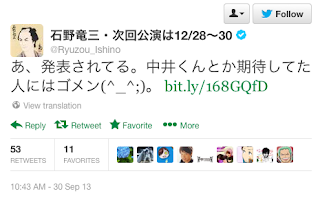 "Heh, it's been announced. I'm sorry to all of the people who were expecting someone like Nakai-kun (^_^;)"

Aww, Aniki! It's true that everyone loves Nakai Kazuya but you're great too.

We talked about a possible HMV/Loppi store-exclusive in my previous post about buying the game, and now 2ch has revealed the details (thank you to mysterious commenter 'G' who spotted it very quickly!). Fans who preorder Sengoku Basara 4 through HMV or Lawson's Loppi service will indeed receive a store-exclusive bonus of a wedding costume for Ii Naotora and a special Naotora decorative game jacket. The Loppi reservation period closes on 17th January 2013, six days before the game's release, though it's wise to order early to avoid missing the regular first press bonus of Masamune's special costume. While HMV can ship overseas and shows the bonus in the listing, I've contacted them to make sure they'll definitely be sending the special bonuses to overseas buyers too and will update this post if they can confirm. Full details of the different versions can be found in my buying post here (or if you're buying through a proxy service and just want to be certain of getting the store-exclusive DLC, the standard edition and Hyakka Ryouran Tamatebako edition are on the Japanese HMV site now). 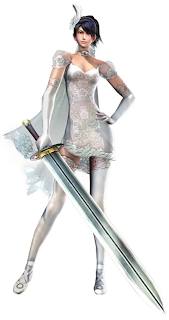 There are plans for the DLC to be offered on PSN later for a fee. In any case, I'll be changing my reservation from Amazon Japan to HMV since there's no advantage to buying from Amazon.

The part of the official website which tracks ticket availability has updated this week to show that the Osaka performances are completely sold out with many dates in the Tokyo part of the tour set to join them soon.

Today marked the first day that fans could join the reborn Basara Club. There's a choice upon application to decide between the designs on your membership card and greetings cards: Masamune/Kojuurou, Yukimura/Sasuke, Sakon/Katsuie, Ieyasu/Mitsunari, Motonari/Motochika or Hideyoshi/Hanbee/Keiji. In addition, the special membership gift has been revealed as a Basara Club ema-style keyholder.

There will be performances at 13:30 and 18:30 on 19th January at Tokyo's Nippon Seinenkan Great Hall. Tickets will cost ¥6,800 and the fan club members can participate in the lottery to obtain them from 25th October 2013.

I'm delighted to see that the guest list is for people relevant to the new game so far. The stage play cast members are lovely, but since this is a much smaller event it would be a shame for them to take the focus off Sengoku Basara 4. I'm hoping the next announcements will include Hoshi, Nakahara and some kind of substantial representation from the Toyotomi side. Separating the stage play activities into their own Bushou Matsuri event was a good idea.

It's in Japanese (of course) but it's still worth mentioning that Capcom have opened an official Facebook page for the series. It doesn't have many likes yet and I think that it deserves a few more. So far all they've used it for is posting information from the series as it's announced.
at 6:54:00 am