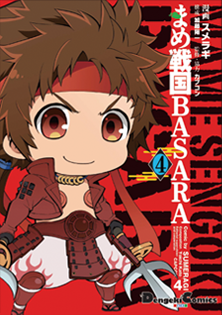 The physical edition is available online from import stores such as Yesasia, Amazon Japan or CD Japan; the Kindle version doesn't seem to have been released yet. It's worth mentioning too that a set of adorable character illustrations is included between the chapters. I don't think they were part of the series' original serialisation in Dengeki Maoh magazine, so they're a nice little bonus for readers of the books.

The first story in this volume of Mame Sengoku Basara is about Mitsunari. It's time to celebrate Tango No Sekku, the Japanese celebration better known today as Children's Day. Gyoubu presents Mitsunari with a huge Hideyoshi-shaped display, and the pair of them then set off on a trip to find a kabuto helmet grand enough to adorn Hideyoshi's head.

Along the way they encounter Kingo busily gobbling his way through traditional Children's Day snacks. Will his kabuto be suitable for Mitsunari's quest..?

Next, Sasuke and Yukimura rush to assist when they hear an anguished cry nearby. It turns out that it's only Kanbee moaning about his wretched fate as always, but that doesn't dampen Yukimura's eagerness to help. Unfortunately, Yukimura's enthusiastic support might be too much for the miserable Kanbee to handle.

The third story takes a look at the life of a ninja by following Sasuke in his daily routine. He seems to spend most of his waking hours looking after Yukimura and helping around the castle, though he puts more effort into his job than you'd think. Yukimura is also the star of the next chapter, where after feeling nostalgic for Oyakata-sama's training he goes on a trip to Satake Yoshishige's special training camp for 'straightforward'-style combat. Though Sasuke doesn't seem too impressed by Yoshishige's oafish soldiers, Yukimura fits in perfectly with their simple, direct approach to life and has a marvellous time.

The action then shifts to Motonari as he goes on an expedition to Anegakouji Yoritsuna's territory. This is mostly an excuse to set up a silly joke where Motonari hears Yoritsuna chanting that the forest (mori) is good and interprets it as 'Mouri is good'. Yoritsuna's clueless nature ensures that the misunderstanding continues for a while.

More regional warlord adventures follow when Yukimura petitions Mitsunari to go on a hunt for Amago Haruhisa, rumoured to be able to control sand. Yukimura brings Motonari along too as he'd heard that the pair were on bad terms, and this is confirmed mere moments after Haruhisa makes his appearance. A fight seems unavoidable...

After the dust has settled, the scene changes to the height of the Toyotomi forces' reign. A disgruntled Mitsunari is asked to join up with Ieyasu and carry out a request for Hanbee on behalf of Hideyoshi himself. Mitsunari gets so overexcited that all of Ieyasu's attempts to calm him down just annoy him further as the pair of them head out to help prepare for a fireworks display. Surely nobody would be foolish enough to interfere with such an important event?

Heading back to the main storyline, it's the height of summer and both the Chousokabe and Date forces decide they need some refreshment. By coincidence they pick the same location for a nighttime test of courage, and both armies end up having a lot of fun trying to scare their rivals. They're not the only people there, however - Oichi and Nanbu Harumasa are about to make their relaxation time a lot more frightening.

The final two chapters in the book are the shucchouban ('excursion') stories originally published in Sengoku Basara Magazine rather than Dengeki Maoh. The first involves Masamune and Kojuurou paying Itsuki a visit as she bravely protects her town's rice paddies from invading bears. Someone must be provoking the bears to attack, but who - and why? The second shucchouban chapter is a parody of Yukimura's sombre Sengoku Basara 3 storyline with Kingo and Kanbee haunting his nightmares.

In case it isn't obvious, I love this light-hearted Sengoku Basara spin-off series. The quality seems to increase with each new volume; Mame Sengoku Basara is still going strong and it shouldn't be long before we start seeing brand new Sengoku Basara 4 characters appearing for the first time in future issues of Dengeki Maoh magazine.

In the afterword, the creators muse about who will appear on the cover of the next printed volume. Personally, my money's on Keiji with the Setouchi pair following later on to keep the collection nice and colourful. I hope that we'll eventually have enough volumes of the manga that every character in the series will have the chance to shine on a cover!
at 10:14:00 pm