I'm posting a little late as these items actually arrived yesterday. This week's deliveries include the gorgeous Brave 10 limited edition Blu-ray set from NIS America and the Japanese limited edition Blu-ray of the Zettai Karen Children OAV - which was the first press even though it was released back in 2010. I'm guessing it didn't sell very well, sadly. The limited edition of The Unlimited -Hyoubu Kyousuke- volume 6 completes the list of Blu-ray acquisitions.

The two CDs are 30th Anniversary Capcom Music Best: Original & Arrange and Sengoku Basara: Burari, Bushou Futaritabi ~Kyouto-hen~. I also received a free Sharrkan (Magi) keychain from Yesasia which I forgot to include in the photograph. 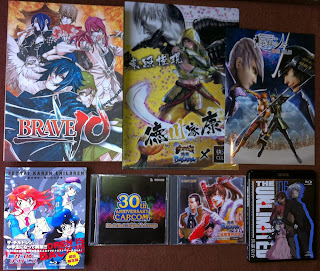 In the top right corner is the fourth and final newsletter from the old Sengoku Basara Eiyuu No Kai fan club and next to it is my free gift of a Ieyasu/Mitsunari clear file from the Basara shop.

The previous note about the last batch being my final doujinshi purchases until winter Comiket was a lie too, as I seem to have acquired a few more somehow.
at 1:58:00 pm