This has been a relatively quiet week for news if you're an overseas Sengoku Basara fan, at least until tomorrow when the official website will update and open up the character profiles for Hideaki, Tenkai, Keiji, Toshiie and Matsu.

It's another story in Japan, of course. Many fans spent last weekend attending the Oni Kojuurou festival in Shiroishi along with game producer KobaP and Kojuurou's seiyuu Morikawa Toshiyuki, while this weekend Motochika's seiyuu Ishino Ryuuzou will be attending the Machi Asobi event in Tokushima with the Sengoku Basara 4 team.

Weekly Famitsu broke the news of the latest character announcements last week, and now it's Dengeki Playstation's turn to profile the newcomers and add commentary about Sengoku Basara 4...except the usual comments from director Yamamoto Makoto are missing and the game was only given a single page of coverage. Worst still, it was all recycled and only a couple of tiny pictures seemed to be new. They'll be on the official website in a few hours anyway, making it a pretty disappointing issue of the magazine.

On the bright side, Sengoku Basara 4 has reentered the Most Wanted chart in 15th place. Let's hope it can climb higher! It's reportedly moved up to 12th place in the ranking of upcoming titles in Weekly Famitsu.

A few new manga solictations have quietly appeared in shop listings over the last couple of days, including volume 6 of Itou Ryuu's Sengoku Basara 3 Bloody Angel manga due for release on 8th November 2013.

That's not all though; there hasn't been any formal announcement yet but fans of Motonari and Motochika will be thrilled to learn that the third anthology manga to be themed around specific characters is on the way, and it's going to be based around the Setouchi area!

Sengoku Basara Comic Anthology 'Setouchi Chronicle' is scheduled for release on 27th November 2013 under the Dengeki Comics EX line, priced at ¥893. I wonder what the cover will look like if it's going to feature more than one army?

The chances of Motonari and Motochika being in one of the next few character announcements just increased further.

I'd been waiting for this. The colour samples for the new Mame Sengoku Basara trading figures were shown off properly this week, although the matte finish makes me think they're still CG rather than photographs of actual figures. The release date will be 23rd January, just like the new game, and the cost of a box of nine randomly-packed figures will be ¥5,850 (¥6,143 with tax). They're available through all major importers such as Yesasia and AmiAmi. 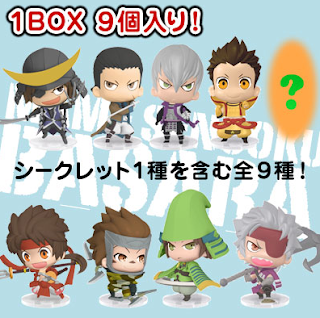 The characters available are Masamune, Kojuurou, Mitsunari, Ieyasu, Yukimura, Sasuke, Motonari and Motochika with one hidden character. I personally think Keiji will take that spot as he features quite prominently in the spin-off and (in my opinion...) his Mame Sengoku Basara design is the cutest of all.

Capcom is sparing no effort to promote Sengoku Basara 4 with another batch of merchandise revealed on the CafeReo website. The new items are due for release in late November 2013. I'll quickly run through the descriptions.

Firstly, you can now keep your glasses safe with a Sengoku Basara 4 spectacles case and cleaning cloth, available with a choice of Masamune, Yukimura, Mitsunari and Kojuurou designs at ¥1,800 per set. 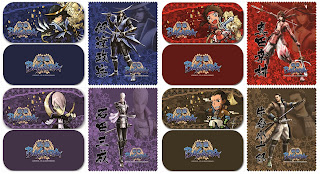 People who don't wear glasses will have to make do with Sengoku Basara 4 pen cases for ¥800 each. This time, the designs available are Masamune, Mitsunari, Katsuie and Sakon. 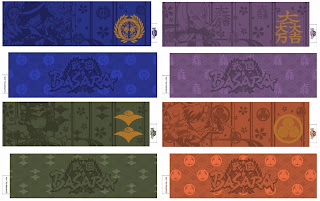 A choice of three ¥2,500 cushion covers with designs based on Masamune/Kojuurou, Yukimura/Sasuke and Mitsunari/Sakon is next. Cushions must be purchased separately. 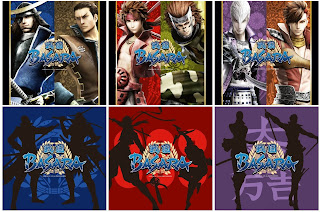 Memo pads costing ¥600 each might be a more affordable option for fans of Mitsunari, Masamune and Yukimura. 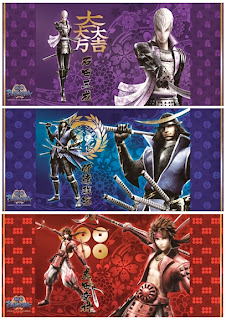 Lastly, there's a range of purses for ¥1,800 each decorated with Masamune, Mitsunari, Yukimura and Kojuurou imagery. Each also includes a charm which resembles an old-fashioned Japanese coin. Please note that I mean 'purses' in the English sense, as in a pouch to hold coins - they aren't full-size handbags! The purses will be released a little later than the other items in mid-December 2013.

The Sengoku Basara 4 calendar was recently shipped out to customers and a few fans were shocked to discover that Kojuurou's page (July) has a flaw in the form of a black smudge. The full details are buried within the apology posted by the manufacturer.

One of the advantages of buying Japanese products is that companies will generally own up to their mistakes and treat their customers well. If you purchased the calendar as an import, I'd recommend contacting your retailer swiftly to ask them whether they can assist with fixing the faulty page.

I've seen quite a few sources claim to know decisively which element the new Sengoku Basara 4 characters are, and I want to bring the topic up here because I don't think it's as clear cut as people are saying. For example, the English-language Sengoku Basara Wiki refers to Shikanosuke, Katsuie and Sakon as having wind elemental powers, with Naotora as fire and Matabee as lightning.

The Japanese demo build, which journalists were able to play at last month's Tokyo Game Show, seems to be the main source of clues about elements. The photographs in this report make it appear as though Naotora is indeed fire, with both Sakon and Katsuie light. Or possibly wind; the icon is new, after all, but it would be strange for there to be three different yellow-coloured elemental graphics.

However, if you look carefully during the TGS Digest footage released by Sony, Sakon is shown with a completely different elemental symbol during the shot of the character select screen. Before it switches to him, the same element is clearly visible in Masamune's profile. 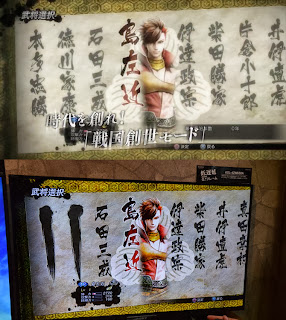 Masamune is very unlikely to have lost his signature lightning theme so this implies that Sakon might be lightning as well. Alternatively - and I feel that this is a more likely explanation - it means the elements for the new characters hadn't yet been decided at the time Capcom put their demo footage together.

Please tread carefully before assuming any of the new characters have had their official elements confirmed yet. If the official sources contradict one another it's impossible for anyone to know which to trust!

Thanks to the delightful @starshapevx on Twitter, I was alerted to a video from an Australian television show Good Game which briefly covers Sengoku Basara 4 during a tour of TGS 2013. I hadn't ever heard of Good Game before but the hosts seemed respectful and they even managed to get a translated introduction to the game straight from director Yamamoto Makoto, helpfully asking him questions and demonstrating that English-speakers can be interested in Sengoku Basara 4 too. The important part starts at the 5:49 mark in the video.