News: Weekly Famitsu (5th September 2013) announces the next round of Sengoku Basara 4 characters

Setting into a rhythm, tomorrow's Weekly Famitsu magazine has revealed the next batch of Sengoku Basara 4 characters - and it's a Takeda reunion along with confirmation of a rumour I posted about before! I'll update this around midnight when I have the full scoop as usual. Until then, here's a collection of the early details coming in from Japan. Early pictures from 2ch of Naotora, Shingen, Sasuke and a pair of combat scenes are available and someone has already made a comparison shot of Shingen with his Sengoku Basara 3 Utage artwork - it's sad that he's joining Mitsuhide as an unplayable veteran of the series...

Ii Naotora 井伊直虎
Character image phrase: 剛潔撫子 Gouketsu Nadeshiko ('Strong And Righteous Carnation')
Seiyuu: Sakamoto Maaya
Weapon: Kyoken ('giant sword'). It's enormous, and shaped more like a classic fantasy sword.
Playable: Yes
Description: The hot-blooded female general of the Ii army burns with animosity towards all of the world's men. Naotora swings her sword for the sake of making a world for maidens, offering relief to the maidens who grieve in war. In the past, her fiance fled due to the war with the Takeda army dragging on for so long. It's because of this that she harbours one-sided hostility towards Takeda Shingen.

When using her unique abilities, Naotora shifts her centre of balance by using other abilities to draw out powerful skills. It's a technical way of fighting. And it's not just about the long reach of her giant sword - Naotora also uses her own fists as weapons. Is she striking with the anger she feels towards the Takeda forces for causing her to miss her chance at marriage!?

Note: The 'carnation' (nadeshiko) in her four-character image phrase can also simply mean an adorable girl, and gouketsu written with different kanji can be a great hero. It's a powerful title but there's so much implicit meaning that it's hard to write it simply in English.

I think she'll be interesting, especially hating men in a world where so many of the other characters are male. I wonder if we'll see her mysterious ex-fiance..?

"This is to be an era where maidens will live strong! Men of this world, prepare yourselves!"

Sanada Yukimura 真田幸村
Character image phrase: 天覇絶槍 Ten Ha Zessou ('Spears Reigning Supreme In The Heavens')
Seiyuu: Hoshi Souichirou
Weapon: Dual spears
Playable: Yes
Description: The Takeda army's young commander, with a heart which burns like flames. Having been given charge of troops by supreme commander Takeda Shingen, he fights hard to see 'Fuurinkazan' for himself even as he looks towards claiming the land. The mutual acknowledgement of strength he shares with Oushuu's Date Masamune makes them fine rivals.

Note: It turns out that they're really using his CG render from the cover of Sengoku Basara Magazine issue 2. So we'll see a fresh-faced, young-looking Yukimura in Sengoku Basara 4.

"Let's go, Sasuke! I'll throw down a challenge to Oyakata-sama...no, to Takeda Shingen!"

Sarutobi Sasuke 猿飛佐助
Character image phrase: 蒼天疾駆 Souten Shikku ('Swiftly Riding The Azure Sky')
Seiyuu: Koyasu Takehito
Weapon: Shuriken
Playable: Yes
Description: Sasuke is a capable shinobi who carries out Takeda Shingen's orders. His role is support Sanada Yukimura. Though he usually has a carefree attitude in spite of the atmosphere, his true military power and care for his master are beyond doubt. Sasuke also has a callous, ninjalike side; this coldheartedness can be glimpsed depending on which enemy he's facing. With the gigantic shuriken he uses as weapons, he takes full advantage of his agility on the battlefield to toy with the enemy forces.

Note: His section is really short so I'll translate the quotes too even though I don't usually do that out of fear of messing up the tone of the original dialogue.

Takeda Shingen 武田信玄
Character image phrase: 戦神覇王 Senjin Haou ('God Of Battle, Supreme Lord')
Seiyuu: Genda Tesshou
Weapon: Gunbai axe (an axe which resembles a warlord's fan)
Playable: No
Description: The supreme commander of the Takeda forces with the nickname 'Tiger of Kai'. Thinking of the people suffering from the war, Takeda Shingen's blazing heart turns towards unifying the land to bring the turbulent age to an end. Leaving command of the army to the young general Sanada Yukimura, Shingen himself goes out onto the battlefield to inspire his soldiers. In this game, Takeda Shingen is an enemy commander (i.e. an unplayable character) who impedes the other warriors.

Shingen is full of fighting spirit, leaving the Takeda army to Yukimura. It seems there's a scene where he comes to blows with Naotora, whose destiny is linked to his. Shingen swings his fist without holding back even though she's a girl. What's the outcome of the fight..?

"Yukimuraaa! I entrust the fate of the Kai Takeda to you..! Take command and try to unify the land!"

The article states that when the shogun Yoshiteru gives the order to restore power to the heavens, a scroll is released. That scroll then becomes the character selection screen. The picture is cropped so you can't see how many names are on the scroll other than the characters already announced.

This issue's gameplay information concentrates on the 'Sengoku Creation Mode'.

Everything progresses dramatically in Sengoku Creation Mode.
On your way to the battleground, you might see things like "Shibata Katsuie marches as the Oda army's advance guard!" or "Yamanaka Shikanosuke is performing a search of the whole country for Amago Haruhisa!?" as the tactical situation at each location is relayed. In turbulent times with a large number of commanders aiming to unify the country, there's a dramatic feeling as they busily go about their military affairs. Check each army's movements and try to decide how to proceed!

Note: The screenshot shows the outcome of the third battle with the Ii and Takeda factions displayed prominently on the map above. There's a scroll which says 'drama route occurrences' and a list of events:

Note: Hajou means the castle of a conquering ruler. Hideyoshi is the 'Haou' and his castle is the 'Hajou'. 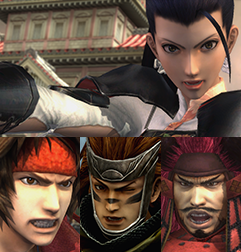 Customise the battle freely!
After selecting your character from the scroll, you'll be taken to the 'march screen' from which each commander's story will progress. You can receive tactical reports on each of the regions, and it also serves as the configuration screen where the player can set the BGM, difficulty level, rewards etc. It even transitions seamlessly into the battle preparation screen showing your 'acquired skills' and 'character growth'.

Note: There are two screenshots in this section. One shows a stage selection accompanied by the shot of Masamune on horseback which we originally thought might be a quick time event of some kind. There are some statistics about the level currently highlighted on the right side of the screen and I can see the options they talked about. Then below, there's a shot of the familiar character customisation screen. It looks as though there's space for six accessory slots on the weapon (the basic Kagehide sword in the picture just has two) and Masamune is shown with space for five skills along with three specials. Kojuurou is set as his comrade. There's a lot more space for costumes underneath, interestingly. It's a nice, spacious interface.

There's also a section in the article advertising that the game will be playable at the upcoming Tokyo Game Show 2013, as we already knew. Six characters will be available in Sengoku Creation mode: Masamune, Mitsunari, Sakon, Katsuie, Naotora and Yukimura. Attendees will be able to experience giving orders to their battle comrade, the 'Giga Basara' techniques and the enemy soldiers' combined formations!

In other news, Sony confirmed they'll be showing Sengoku Basara 4 off at their booth at TGS too, and the game is now in 16th position in Weekly Famitsu's Most Wanted chart. I think we can expect a new video soon showcasing all of the new announcements.

My initial impression upon reading the news was that the loss of Shingen as a playable character (again) was major disappointment. Over the course of the day, my view has mellowed and I've come to accept the fact that I enjoy watching Oyakata-sama far more than actually playing him - I'm not that great at games and his move set is probably my least favourite (with Ujimasa's coming a close second). It felt as though Shingen needed the most work of the six unfinished Sengoku Basara 3 Utage characters, and I guess it's not his time. Being an unplayable enemy commander is definitely preferable to spending most of the game sick in bed, as he did in Sengoku Basara 3. It sucks for the people who loved playing as Shingen, though.

Update 04/09/2013 (evening): I'll finish the translation in the next few hours, but I had a long day at work. Please be patient :)
Update 04/09/2013 (night): All done. Pictures will come when the official website updates later in the week.
Update 05/09/2013: Added the pictures as the official website updated its character page overnight and fixed a minor-yet-dumb error. The new character pages will open on the 12th September. Any further updates will be included in new posts as this one is now complete.
at 8:09:00 am