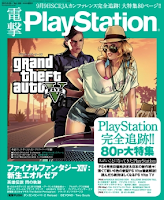 With Tokyo Game Show 2013 just a week away, both of the major Japanese gaming magazines which give coverage to Sengoku Basara 4 have devoted most of their pages to previews of the upcoming event. Tousaku has rounded up the news from tomorrow's Weekly Famitsu where it sounds as though the only Sengoku Basara 4 content was a single picture, which was probably used in the TGS preview rather than being part of a proper article.

There were a few scraps of information in rival magazine Dengeki Playstation, however, since they hadn't had a chance to publish the character profiles from last week's Weekly Famitsu until now. Tousaku has already translated the first impressions offered by some Japanese fans at the link above; now that the magazine has been released I'm going to quickly run through the tiny two-page article. The only real new content is in the handful of comments on the new characters from Sengoku Basara 4 director Yamamoto Makoto, and even then they are quite similar to his remarks at last weekend's event!

YamamotoD's comments are in the bullet points. Everything else was written by the magazine staff.

The new female commander is a man-hating wielder of a giant sword! She holds a powerful grudge against the Takeda army...

She manipulates the giant sword which is close to as long as she is tall. Combining strength with dignity, the maiden leaves the enemy soldiers helpless with a single stroke of her blade.

Keep an eye out for her lovely outfit with its bridal imagery.

(Important note: A lot of western gaming websites have been mistakenly calling Naotora 'Li Naotora' rather than 'Ii Naotora'. This is completely incorrect. Please spread the word!)

His usual carefree appearance is as strong as ever.

Devoting himself to embodying the 'Basara' image!?

Even though he appears as an enemy commander, a fist fight is inevitable!?

The gameplay comments focus on the Sengoku Creation Mode and the way that other factions take their own actions as you progress. After summarising everything it gives some examples of the simultaneous developments which may occur as your individual 'drama route' story unfolds.

The march begins! Katsuie heads towards battle as the Oda forces' advance guard. What's reflected in this young man's eyes as he looks towards the battlefield?

Shikanosuke travels across the whole country with Oyassan... Accompanied by his chaperone, Oyassan, Shikanosuke searches for his missing lord. What will happen on this one-man, one-animal road trip!?

Matabee quietly starts to move. He's wearing a bold smile. Could it be that he's found Masamune, who is right at the top of the list of grudges in his mark book?

The magazine also remarked on the graph which now appears in the character customisation screen, questioning whether the stats on the graph would change somehow. Incidentally the five stats are attack power, defence, life gauge, gauge increase rate and then something blurry which looks like the word 'hardness' ('koudo'), whatever that means in this context. I forgot to mention that in last week's magazine post.

And that's all. The game is still sitting in 17th place in Dengeki Playstation's Most Wanted chart this fortnight and we can look forward to the voice samples for all four of these characters when the official website updates tomorrow. According to a Capcom producer, there's also a little Sengoku Basara 4 coverage in the Japanese edition of Weekly Shounen Jump with colour pages showing Matabee and Shikanosuke.

Edit 12/09/2013: Ooh, the official website also added a section showing off the characters' moves using Katsuie and Sakon as examples. There are quite a few new screenshots to enjoy split up into normal attacks, unique skills, special moves and Basara techniques. The skill mechanics sound just like those in Sengoku Basara 3 Utage.
at 10:59:00 pm