Please see the bottom of this post for the newest information.

I was following the rumours on Twitter this (Saturday) morning in bed so I'll round up the highlights I saw. Please remember these are just reports from various complete strangers who happened to win lottery tickets to be at the stage event, so if some parts contradict others we'll have to wait for the official statements to clarify! Morikawa Toshiyuki (Kojuurou's seiyuu) showed up at the Saturday show.

It seems that the main feature of the stage presentation was the debut of a brand new promotional video. Hopefully the rest of us can watch it in the next update to the official Sengoku Basara 4 website.
If there are any new rumours tomorrow, I'll just add them to the bottom of this post to keep everything together.

Also, I never mentioned this before but there are a lot of Sengoku Basara 4 posters in the Kyoto and the surrounding areas at the moment. They still don't show a firm release date other than the start of 2014.

The Sunday event was apparently broadcast live worldwide on NicoNico, which is very annoying as I didn't know in advance and completely missed all of the announcements about it while I was asleep. It also means there's less information being retweeted since most people just watched it themselves. I'll be able to watch it in a couple of hours but here are the points I pulled off Twitter in the meantime.

Update at 10:30 on 08/09/2013: Ok, I'm now able to watch the Timeshift version of the stage presentation on Nico Nico at last. I am already a Premium member on the Japanese part of Nico Nico so you might have to pay to see it if you use the English version. The Sengoku Basara 4 stage begins at 3:55:55 and the link is here. I'm still drowsy but I'll try to summarise the key points. There are pictures too.

(I'm putting everything after a jump as this post has become longer than I expected. Please click below to read on.)

The presentation opened with the first Sengoku Basara 4 promotional video, then KobaP came on stage to introduce the game and announce director Yamamoto Makoto. There were no other guests. They then showed the promotional video again with some commentary from the two creators. They said the same kind of thing we've already heard in the magazine articles to bring the audience up to date, so the new material about Naotora was most interesting (she hasn't received a Dengeki PS article yet so YamamotoD's comments were new to me).

They presented the main four (Masamune, Mitsunari, Katsuie, Sakon) first then Yoshiteru, then moved on to the other newbies: Shikanosuke, Naotora and Matabee. Everyone else came together at the end organised by their armies and then there was commentary about the new Sengoku Creation mode and battle mechanics. Key points I caught in between them repeating what we already knew:
The brand new Kojuurou play video was then shown. I took a few pictures of my own but the whole thing is even better - sadly the version on the livestream struggled with quality during the battle scenes. 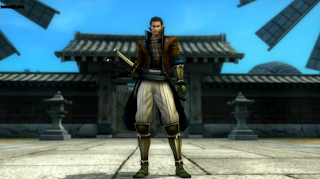 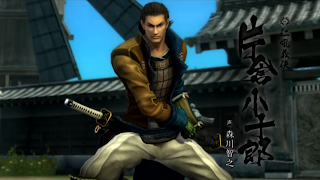 The battle scenes had some interjections by Katsuie, Sakon and the Toyotomi forces, and two bosses can be seen on the mini-map. It looks as though this stage involves disrupting a battle between the Oda (orange) and Toyotomi (red) forces? I could just about make out the pixellated names of some retainers like Katou Kiyomasa, Ukita Hideie, Katou Yoshiaki, Takigawa Kazumasu and Hori Hidemasa (so I guess that confirms they won't be playable this time around). 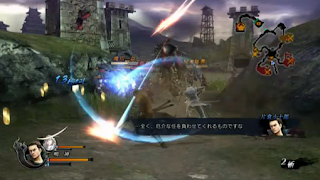 The start of the Giga Basara technique. 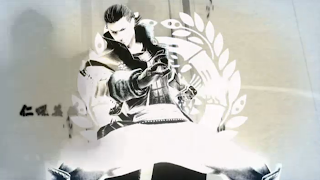 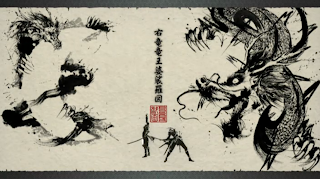 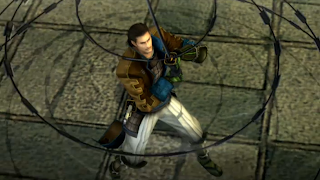 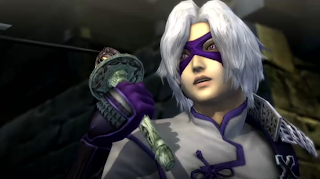 The creators then held a quiz for the audience with Sengoku Basara 4 posters as prizes. The first question asked for the name of Yoshiteru's 'restoring power to the heavens' order. The second asked for the name of the Giga Basara technique. The third asked which item Sakon possessed (dice), the fourth what kind of haircut Katsuie had, and the last asked who was accompanying Keiji in the new travel CD. One of the people who answered sounded really young.

And after a brief news bulletin to advise the audience what they should be buying at the event, Yamamoto ran through a few more points.
And that was all. The presentation was only thirty minutes long so there wasn't much time in between the videos and the usual audience greetings. I hope I didn't miss anything!
at 2:36:00 pm