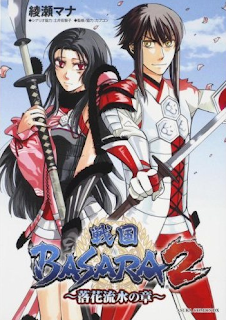 Ever wondered what a romantic shoujo manga version of Sengoku Basara would be like? Me either, but fans in Japan had the chance to find out for themselves when Capcom oversaw the production of this single-volume shoujo story about Azai Nagamasa and his wife Oichi, sister of the terrifying 'Demon King' Oda Nobunaga.

Sengoku Basara 2 ~Rakka Ryuusui No Shou~ ('Sengoku Basara 2 ~Chapter of Falling Blossoms, Flowing Water~') was originally serialised in Kadokawa Shoten's now-defunct Beans Ace magazine between November 2007 and May 2008. Its release coincided with the Sengoku Basara 2 Eiyuu Gaiden (Heroes) game in which the two leads had a starring role.

The manga was subsequently compiled into a single 140-page volume under the Asuka Comics DX label on 26th June 2008. Priced at ¥520, the book can still be purchased today from all good import stores such as Yesasia, HMV Japan or Amazon Japan.

Sengoku Basara 2 ~Rakka Ryuusui No Shou~ was illustrated and written by Ayase Mana with supervision by Capcom and scenario cooperation with Doi Sachiko. Describing itself as being about the 'awkward love between Azai Nagamasa and Oichi', the manga is a classic romance story told over four chapters.

The Azai couple have already been married for several months when the story begins. Since it's depicting an arranged marriage (for political reasons, no less), there's an acute awkwardness in the way the two of them treat one another as they go about their daily lives. It's clear that they care very deeply about each other in their own ways, yet both struggle with finding a balance in their relationship. Oichi is also having trouble adapting to her new lifestyle; the Oda household she grew up in had a very different atmosphere.

One of the recurring problems is that Oichi wants to fight alongside Nagamasa and be more useful to him; however, he's extremely overprotective, refusing her wishes outright and coddling her. She appreciates his care but feels utterly useless as a result. The creators narrowly avoid the trap of making Nagamasa's fussing so severe that it masks his sympathetic side; he's doing the very best he can to care for his new wife within the confines of his rather rigid personality.

Things carry on like this for some time, with Oichi lurching closer and closer to her signature depression while Nagamasa fails to notice that anything is wrong. It's the appearance of Maeda Keiji in the second chapter which stirs things up in the end. His carefree personality immediately irritates Nagamasa - and when Toshiie and Matsu arrive later on, the character interactions become even more complicated.

Both Oichi and Nagamasa are really, really cute. The various unnamed Azai attendants and soldiers make excellent side characters, and a large number of them are shown - they give the impression that Nagamasa is constantly surrounded by a crowd of dedicated, loyal followers. Keiji also comes off very well indeed; he's much better suited to a romantic story than spending all his time on the battlefield, and he gets plenty of opportunities to discuss the nature of love without sounding heavy-handed. In fact, an attentive reader might gain a deeper insight into the way Keiji, Toshii and Matsu feel about love themselves from the advice they give to the main couple. Keiji's comments are especially bittersweet when his tragic past experience with Nene is considered.

The drama increases substantially in the final chapter when the Oda forces suddenly march on Azai territory for no apparent reason. Nagamasa has to confront his brother-in-law on the battlefield while poor Oichi has to choose between supporting her terrifying brother or her new husband, who is heading out to fight a war he's unlikely to win. Though there are battle scenes, this story is more about Oichi's emotional turmoil as a person - and as a girl - than her battle prowess as a naginata-wielding warrior.

Sengoku Basara 2 ~Rakka Ryuusui No Shou~ is a lovely one-shot manga full of romance, drama and a dash of comedy. While it lacks the raw emotional punch of Oichi's and Nagamasa's stories in the game Sengoku Basara 2 Eiyuu Gaiden (Heroes), fans of one of the lesser-seen couples of the series who can appreciate the girlish artwork might be pleasantly surprised. Watching the straightforward, uptight Nagamasa struggling with his love for Oichi is simply adorable. This manga gave me a much better appreciation of his character beyond the justice-obsessed hero image he presents.

One other thing which works in the story's favour is that there are no cameos from anyone unrelated to the extended Oda 'family': it's a tight, self-contained side story without any distractions. Nouhime, Ranmaru and the Gohonyari all get brief appearances too, of course. Side stories work best when they keep their focus on a few specific characters, and consequently this manga comes highly recommended.
at 12:23:00 am