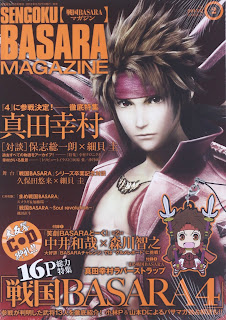 It didn't take quite as long as last time for my copy of Sengoku Basara Magazine issue 2 to wing its way from Japan to my letterbox. The magazine was released on 27th August 2013 priced at ¥2,400, and it sold out quickly at many online stores. Japanese vendors seem to be the best option for securing a copy if you haven't already; HMV Japan, Amazon Japan and Manga Oh are still accepting orders at the time I write this post. As previously reported, a brand new CG render of Sanada Yukimura is on the cover this time.

To give some backstory for the benefit of readers who come across this review in the future, Sengoku Basara 4 was announced back in March and one major character from the history of the series was particularly notable for his absence in the line-up. Capcom had been teasing that Yukimura would be the cover star of the second issue of the magazine for months, but after its release date had slipped by a month and the cover artwork still hadn't been confirmed, even the most optimistic fans had started to become concerned about the Takeda's 'young tiger'.

Consequently, the final unveiling of the magazine's cover late at night on the Sunday before its Tuesday release date was big news, finally confirming that Sanada Yukimura would be appearing in the newest game. A flood of relief and delight swept across the Japanese fandom when people finally saw his face on the cover with the announcement right beside it.

Now that the excitement has (mostly) settled down, I can review the full 120-page magazine at my leisure to see if there is anything else to confirm hidden within its pages. Tousaku has been working hard posting detailed translations of most of the magazine's contents on Tumblr. It doesn't make any sense to duplicate all of that information so instead I'll link to the excellent Tumblr posts, only including notes on the Sengoku Basara 4 content where I might want to refer back to it myself in future.

So, onto the magazine. The bonus items are similar to before: an exclusive Mame Sengoku Basara rubber strap featuring Yukimura and the newest Showgeki Basara Talk! Masamune & Kojuurou No Maki Vol. 2 CD with Nakai Kazuya (Date Masamune) and Morikawa Toshiyuki (Katakura Kojuurou). The CD contains three skits. The first two are a response session where they go through questions from readers and a 'live' drama performance, 'Basara Challenge!'. This is all about Masamune and Kojuurou trying out some fine cuisine in one of the series' many absurd 'what if' scenarios. The third segment is a 'Basara Fever Game', where the pair have to keep coming up with words relating to a theme without breaking the game's rhythmic chant. Strangely, they had the most success when the theme was US states. There are also the usual opening/closing greetings from the two seiyuu. It's a great CD, and I love the way the two of them suddenly slip into character when required. Hearing them squabbling good-naturedly is worth the price of the magazine!

Speaking of the magazine, it opens straight into the Sengoku Basara 4 feature collating information about the thirteen commanders we've seen revealed for the new game. The information is strewn haphazardly over each page and includes profiles, quotations, comments from the creators, information about the historical figures and large versions of the character artwork we've seen before. I'm just going to list the key points I thought were completely new for the magazine; read the page I linked to above for full translations of the character pages and the quotes!
Next comes a two-page interview with producer Kobayashi Hiroyuki and director Yamamoto Makoto. Unfortunately, much of the space is taken up by explanations of the 'combined military formation' and 'war comrade' mechanics, so there's not much new information. It's all been diligently translated already by Tousaku. The most interesting part for me was where Kobayashi remarked on the fan reactions to the new characters: Sakon has turned out to be more popular than they'd expected so he wants to push Katsuie more. Meanwhile, he thinks Shikanosuke is quite fun but fears the reaction to Matabee will be poor.

Another interview follows to start off the Yukimura-themed coverage. It features both of the main actors for Yukimura, i.e. seiyuu Hoshi Souichirou and stage actor Hosogai Kei. The text is accompanied by a large number of photographs of the pair of them fooling around (even though Hoshi always looks serious). They're both adorably devoted Yukimura fans, and for some reason it always seems as though they work together perfectly. The interview flowed really well. Hosogai mentioned that he was sad that he was going to be separated from everyone in the Takeda group when it was decided he would graduate from the stage play.

Then it's full throttle for the 'Yukimura Chronicle' feature, which traces his appearances through the past games, anime and drama CDs. YamamotoD added some comments too at the bottom of each page which included these tidbits.
A photo report from the Takarazuka Revue's Musical Roman 'Sengoku Basara' -Sanada Yukimura-hen- comes next since Yukimura was the main character. Two lovely Takeda-themed illustrations from Haibara Yak and Satsuki You finish off the Yukimura Chronicle.

The next feature article is a large interview with Hosogai Kei (again) and Kubota Yuuki, Masamune's stage actor. The two of them discuss their graduation from the Butai Sengoku Basara plays. It was very difficult to read this interview; it made me feel emotional seeing them both graciously passing the torch to the new actors.

The cross-promotion gets more blatant on the handful of pages which round up the newest Sengoku Basara merchandise on offer, then the charming fan contribution section provides a mix of enthusiastic amateur artwork sent in by readers. Right at the end of the fan submissions are some special survey results! The ranking comes from the questionnaire in the first issue which was themed around Date Masamune, so there is a mild bias visible in the responses. However, it seems that Mitsunari's dominance over Yukimura in recent polls isn't completely set in stone...

Favourite warrior in the series:

Favourite line of dialogue in the series:

Favourite scene in the series:

Next comes the manga. The first two stories are continuations: Satta Naoto's Sengoku Basara ~Soul Revolution~ takes Masamune and Kojuurou into the heart of the endless antagonism between Motochika and Motonari (via some very unorthodox riding double on a horse), while Sumeragi's Mame Sengoku Basara (Shucchouban) explores Yukimura's Sengoku Basara 3 story with a twist as his recurring dreams are haunted by Kingo and Kanbee.

KobaP's tiny-yet-awkwardly-titled column Kobayashi HiroyukiP No Kyou Mo Basara Na Hi is slipped in before the next comic. While he doesn't reveal anything new his column is very sweet this time, praising the series for the encounters that it's enabled him to have and enthusing over how it's special amongst all of the games he's worked on. YamamotoD has a new column on the next page which is the start of a new series about the process of turning a historical commander into a Basara commander. The first article is all about Mitsunari. Most of the content has been well known since the Sengoku Basara 3 era as Yamamoto has already spoken at length about the design of the characters from the previous game; still, I always love reading his insights into blending history with fantasy to create the series' signature style.

The third manga in this issue of the magazine is a sample from the recent Sengoku Basara Comic Anthology 'Takedagun Chronicle' book, with the 4-koma gag collection Takeki Koto, Homura No Gotoku ('Ferocious, Like A Blaze') by Hakyu Shou. I read this just the other day after buying the book so it was probably the least interesting part of the entire magazine.

The magazine wraps up with the preview for volume three which is scheduled for release in autumn 2013, once again priced at ¥2,400. Ieyasu is going to be the star and appear on the cover, in a special article and on the rubber Mame Sengoku Basara strap. The main feature will be another look at Sengoku Basara 4 - it teases that there might be some new commanders to look out for - while the next Showgeki Basara Talk! bonus CD will be presented by Hoshi Souichirou (Sanada Yukimura) and Koyasu Takehito (Sarutobi Sasuke). It's marked as 'volume one' so it will probably run for two issues like the first set.

There will also be more manga: Mame Sengoku Basara (Shucchouban) will include an appearance by Ieyasu next time, Soul Revolution will explore the connection between Mitsunari's arraival and the ominous black mist, and there'll be a brand-new Wan-Nyan Sengoku Basara (tentative title) slice-of-life manga by Tane Jugou which reimagines the commanders in the series as cute animals. It's said to be a one-shot rather than an ongoing series, sadly.

Like many Japanese magazines, Sengoku Basara Magazine comes with a special survey card you can use to provide feedback with the incentive of a prize. Some of the questions are a little interesting, asking which illustrator or manga artist fans would like to see create a Sengoku Basara comic or illustration in future ("it can be anyone"), which of the new characters most interests them and who they want to see in Sengoku Basara 4 other than the characters announced so far. The results will be published in future.

Well, that wraps up my thoughts on the second issue of Sengoku Basara Magazine. Let's hope the third doesn't suffer from any delays!
at 1:15:00 am