I've been pretty useless this TGS since I haven't been able to cover much of the news in real time. Fortunately, Tousaku's blog and the numerous posts from Nine Demons Yoshitaka have kept the English-language Sengoku Basara 4 updates flowing steadily!

At last, though, it's the weekend so I can catch up on the details myself instead of continuously posting mini-updates on Twitter. I'll put the videos at the end under a cut so people on slower computers don't struggle, as well as instructions for watching the weekend live streams.

Sengoku Basara 4 metal strap collection to be released in December

Presepe listed a brand new piece of Sengoku Basara 4 merchandise this morning and a few other retailers have since added it to their catalogues too. It seems to have been revealed at TGS 2013 except that it went unreported in the media amongst all of the other announcements yesterday. The set of ten 5cm-tall metal straps can be purchased as a complete box for ¥5,250 (discounted to ¥4,790); the characters available are Masamune, Mitsunari, Yukimura, Sasuke, Sakon, Katsuie, Kojuurou, Ieyasu and two secrets. Reservations begin on 15th October with the boxes to begin shipping on 30th December 2013. 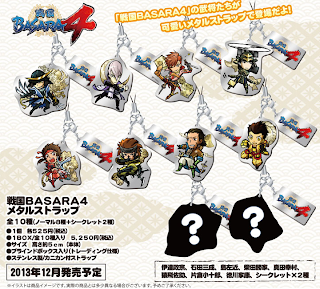 The stage presentations this weekend are going to be streamed for all fans to watch.

On Saturday 21st September, the Sengoku Basara 4 presentation will be at 14:50 Japan time (06:50 in the UK). You can watch it live on Capcom's YouTube channel or try the Nico Nico Live stream in case they pop into the stage area. I've embedded Capcom's stream below just in case that works too.


The Sunday 22nd September presentation will be at 16:00 Japan time (08:00 in the UK). Again, Capcom will be running a livestream on YouTube and Nico Nico. There may be some coverage in the general Nico Nico Live stream too in between the things they have scheduled.

I'm going to skip repeating the rumours from people who attended TGS2013 and instead try to collect the best videos and links in one place to make it easier for newcomers to see what everyone is so excited about.

On confirmed character sightings, we've had a tiny shot circulating on Twitter showing that Gyoubu (Ootani Yoshitsugu) will be in the game and a glimpse of Keiji. There have also been various unsubstantiated rumours about Hisahide and Nagamasa drifting around, too. None of these have been formally confirmed and whether they'll be playable is still unknown. Perhaps we'll be treated to confirmation at the weekend or in the next few issues of the regular gaming magazines?

As well as the Famitsu links in my previous post, Japanese media coverage of the Capcom booth can be seen on Gamer and Game Watch. Coverage of the stage presentations they've given to the industry guests is available via Gamer, 4Gamer and Dengeki.

Gamer also reported on a small Sengoku Basara 4 feature running in next week's volume of Capbon, which has a weird blur over the release details in the sample image. This might be a hint - or it might just mean the preview picture was prepared before the release date was announced. We should find out soon.

Now, on to the videos.

IGN posted a very low resolution close-up video showing the gameplay in action. It really got me in the mood and confirms various mechanics such as mid-stage level-ups!


The livestream from the first day of TGS 2013 contained more footage . Someone has uploaded it on Nico Nico in three parts. Setting up a Nico Nico account is free and there's an English-language version of the site (you can switch languages with the second dropdown menu at the bottom if the page if you get stuck.

The only one of the videos which allows embedding is this footage of Sakon's gameplay from the second day of TGS.


Katsuie's gameplay from the second day of TGS is split into three parts and embedding is not allowed. I can't wait to see what tomorrow's public stage presentation brings. Meanwhile, the efforts of folks over at Koei Warriors has produced an English subtitled version of one of the recent introduction videos.