Masamune's special costume from the BSR48 video was a huge hit when it first debuted, and now it looks as though the casual outfit is making its way to the game series. 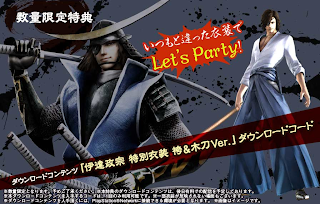 I was disappointed for literally seconds about the idea of DLC for the series before it turned into unbridled excitement at how cool Masamune looks. Needless to say I'll be getting this costume and buying any other DLC which ends up coming out later on.

There will be no less than four special versions of Sengoku Basara 4 available through Capcom's webstore and they've set up a special page to explain the differences.

The Hyakka Ryouran Tamatebako edition costs ¥8,790 and its extra features are a 100-page Sengoku Basara 4 storyboard collection, an 80-page hardcover A4 book about the commanders titled 'Sengoku Basara 4 Bushou Hiden No Sho', a special Masamune jacket (sleeve) for the game and a golden-coloured Masamune custom theme for your PS3, presented in a special box. It's also available through other stores (I just reserved a copy from Amazon Japan). I'll add more store links as soon as the listings are available!

Edit: Now also available from Yesasia Global, Yesasia USA, HMV Japan. HMV has a note on the listing implying it might include an additional bonus. 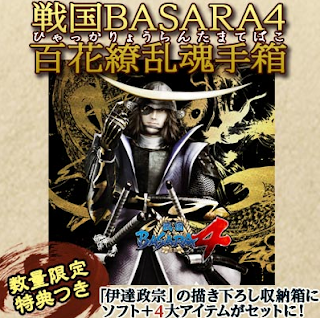 The Ryuuou-Kamewari version is priced at ¥9,990 and includes a leather case showing the Basara-e artwork for Masamune and Katsuie. This edition is exclusive to e-Capcom. 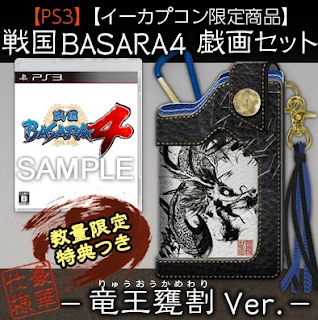 The Saikyou-Chouhan version is priced at ¥9,990. It's exactly the same except the special leather case has the Basara-e for Mitsunari and Sakon on it. This edition is exclusive to e-Capcom. 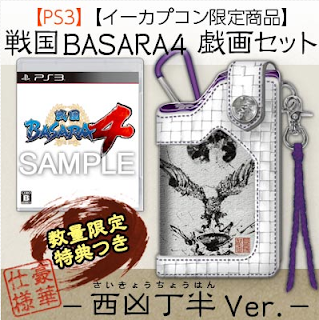 Lastly, the standard edition is priced at ¥6,990. It's available at regular stores like Amazon Japan too, of course.

Edit: Also available from Yesasia Global, Yesasia USA, HMV Japan, Play-Asia. Please note that Yesasia and Play-Asia do not list the DLC in their description for this version while HMV Japan does and also appears to have some kind of bonus included. 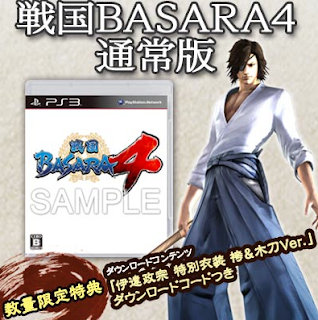 All four editions will come with the download code for Masamune's special costume as a first press bonus.

We now have more information about T.M.Revolution's theme song for Sengoku Basara 4. It will be titled 'Count ZERO'. SCANDAL's ending theme is to be called 'Runners high'. Both songs will appear in future promotional videos on the official website and in game stores in Japan.

Betones are releasing a range of Sengoku Basara 4 boxer shorts

Male fans shouldn't feel left out as there's also going to be a Sengoku Basara 4 x Betones collaboration to produce a range of character-themed boxer shorts for men this December. The boxers will cost ¥1,995 for each one-size-fits-all pair and three designs are available: Masamune/Katsuie, Mitsunari/Sakon and Yukimura/Sasuke.

It's been announced that the upcoming November stage play Butai Sengoku Basara 3 Utage Two: Kyouou Tanjou x Shinen No Utage will have some 'after talk' cast talk shows after three of the Nagoya shows (15th November at 18:00, 16th November at 12:00 and 16th November at 17:00). The cast members who will participate are Nakamura Seijirou (Ishida Mitsunari), Yoshida Tomokazu (Katakura Kojuurou) and Murata Youjirou (Sarutobi Sasuke).

Ieyasu and Tadakatsu added to the official Sengoku Basara 4 website

The official website has updated to add placeholders for Ieyasu and Tadakatsu as revealed in today's issue of Weekly Famitsu (see my previous post). Their sections will open on 26th September 2013 to reveal their full artwork, voice samples (well, for Ieyasu at least...) and screenshots.

There's also an explanation of the Stylish Gauge mechanic I talked about yesterday.

The old Eiyuu No Kai fan club is still wrapping up and already a brand new replacement has been announced: Basara Club. Applications for membership will be accepted from 1st October 2014 and club activities will begin on 1st December. Benefits of membership include a membership card, a special item for joining, the fan club newsletter, greetings cards on your birthday and at the new year, access to special fan club merchandise, access to lotteries for event tickets and also to special fan club events. In other words, the rewards are all identical to those of the old fan club...

It costs ¥1,000 to join, then ¥4,000 each year for the actual membership - however, if you sign up between 1st October and 30th November the setup fee will be waived. The official website for the new club is here.

A game launch wouldn't be complete without a Basara Matsuri event, and sure enough Sengoku Basara 4: Basara Matsuri 2014 ~Shinshun No Utage~ has been scheduled for 19th January 2014, a few days before the game goes on sale on 23rd January. It's going to be held in Tokyo's Nippon Seinenkan Great Hall and there will be two performances on the same day. Seiyuu Nakamura Yuuichi (Shima Sakon) and Okamoto Nobuhiko (Shibata Katsuie) have been announced as the first guests. Members of the new fan club will be given priority in the ticket lottery. The official event website has already been launched. The venue seems quite small by recent Basara Matsuri standards...

I posted about this back in February when it was just a rumour, and finally it's come to fruition! The popular Ichiban Kuji lottery will be running a Sengoku Basara 4 prize campaign in mid-January with tickets costing ¥600. Every tickets wins some kind of prize, but the exclusive 'Kyun-Chara' figures of Masamune (A-rank prize) and Yukimura (B-rank prize) are sure to become sought after. The news bulletin notes that Masamune's helmet can be removed. 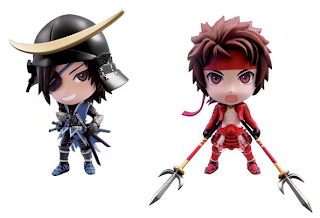 There will also be a prize campaign at Japanese amusement arcades which includes these dapper Masamune and Mitsunari wearable hood towels. 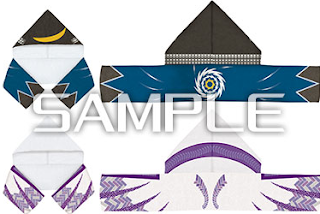 The official website for the lottery will be launched on 24th September.

I'm not entirely sure I find the Ichiban Kuji prize figures all that cute. Fortunately, there will also be a set of Mame Sengoku Basara trading figures released more conventionally in January. Although there's been no formal announcement so far, the unpainted computer-generated mock-ups can be seen in one Twitter user's snapshot (edit: here's another two with samples), clearly revealing that the line will include 'mame' versions of Masamune, Yukimura, Ieyasu, Mitsunari, Kojuurou, Sasuke, Motochika and Motonari with one 'secret' figure to collect. Each blind-boxed trading figure will cost ¥693.

As well as the 'Dragon King' Masamune card I mentioned before which visitors to Tokyo Game Show 2013 can pick up at Capcom's booth, players of mobile game Sengoku Basara Card Heroes Matsuri can obtain a unique Mitsunari card by logging into the game and participating in the event currently taking place. 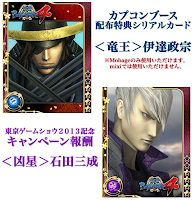 I haven't been following Capcom's brand new Geist Crusher title (or possibly Gaist Crusher according to the official website). Apparently, that was a mistake, since they've announced some crossover fun with Sengoku Basara 4. 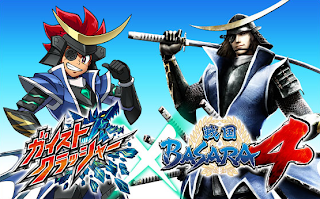 Date Masamune will appear in the game as 'Jet Masamune'. I'm afraid I have no idea what any of this means in context, but it looks good fun. There's a clip in this video too. 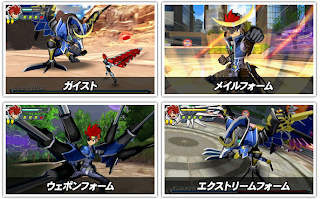 Sengoku Basara to appear at Machi Asobi in October

No details have been revealed yet but there will be some kind of Sengoku Basara content at October's Machi Asobi event. Machi Asobi will run between the 10th and the 12th of October 2013 in Tokushima.

And finally...reports from the Tokyo Game Show venue

It's the first day of TGS so there's a lot going on, and there'll be even more news this weekend after the stage presentations take place. Famitsu has posted first gameplay impressions, an interview and a stage report so far. The venerable Nine Demons Yoshitaka has been able to report some of the reveals in his posts over at the Koei Warriors forums and the booth looks fabulous.
at 8:35:00 am