This post has now been updated with all of the information from the magazine. If you're planning on buying it yourself, it's the issue dated 29th August 2013 but released on 1st August 2013 (magazine dates are always so confusing). The Sengoku Basara article is four pages long with no interview this time.

An early scan of Shikanosuke has been posted on Twitter here (alternate angle).

Yamanaka Shikanosuke 山中鹿之介
Character image phrase: 明察麒麟 Meisatsu Kirin ('Insightful Kirin')
Seiyuu: Irino Miyu
Weapon: Renketsu konbou ('linked cudgels'). It's similar to a set of nunchaku, only crazier.
Playable: Yes
Description: A retainer of the Amago family. Shikanosuke is a boy who is travelling in search of Amago Haruhisa, Unfortunately, his detective skills haven't yet matured and he frequently leaps to the wrong conclusion. He's accompanied by a deer called 'Oyassan' (this is a Japanese way of addressing a middle-aged man).

Upon closer inspection of the additional piece of the magazine highlighting Shikanosuke's abilities, we can see him bowing deeply to Oyassan and riding on his back. Yet in other pictures, the deer is wearing Shikanosuke's armour and using techniques involving tossing him about like a weapon! The pair of them seem to have some more traditional combination attacks too. The Famitsu caption remarks that they seem to be bound by a deep master-student love, and adds that "together they have six legs which they can use to kick their enemies around"!

Shikanosuke's combat style is described as being based around normal attacks - which make full use of his linked cudgel weapons - combined with unique techniques involving Oyassan.

I took a peek back at Sengoku Basara 3 Utage to check Shikanosuke's bodyguard design. It wasn't anywhere near as worthwhile as looking back at Katsuie and Sakon, but I may as well include a picture.

Even as a simple bodyguard character his ties to Amago (and his sand theme) are clear. I noticed that the Sengoku Basara staff picked a different way to spell his name when they upgraded him to being a playable character - this is merely an interesting piece of trivia as there are numerous accepted kanji spellings for 'Shikanosuke'.

(Note: when his profile appeared on the website the quote was slightly different. So I have amended this post to include both.)

Unrelatedly, several Japanese fans are having fun at Shikanosuke's expense by comparing him to Sento-kun, the deer-themed mascot character of Nara.

Toyotomi Hideyoshi 豊臣秀吉
Character image phrase: 裂界武帝 Rekkai Butei ('Military Emperor of a Torn World')
Seiyuu: Okiayu Ryoutarou
Weapon: None
Playable: Yes
Description: The supreme commander of the Toyotomi forces, throwing away the past for the sake of turning the turbulent land of Hinomoto into a mighty country. Able to sweep away a whole army with a single fist, he possesses overwhelming strength. Hideyoshi believes in power, and in that using that power to enrich the country.

"Whether it's in the past or in the future, there's nothing my fists can't take hold of and crush!"

Takenaka Hanbee 竹中半兵衛
Character image phrase: 蒼烈瞬躙 Souretsu Shunrin ('Blue Fury Darting Forwards')
Seiyuu: Ishida Akira
Weapon: Kansetsuken ('jointed sword'). It can be used as either a sword or a whip.
Playable: Yes
Description: Hanbee is the genius tactician who supports the Toyotomi army, and Hideyoshi's close friend. He hides his illness in order to help his friend turn the land of Hinomoto into a strong country during turbulent times - and for the sake of the future of the Toyotomi forces.

"Hah, my training is strict, you know? You'd better prepare yourself."

Hideyoshi and Hanbee are retaining their original fighting styles and voice actors (of course). I'm delighted beyond words to see that both will be playable characters.

This brings the total number of Sengoku Basara 4 characters to eight confirmed (with Kojuurou also announced, but not formally confirmed). And everyone except Yoshiteru is playable. 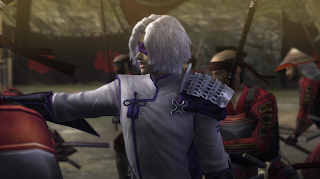 There are a few pieces of information about the battle system dotted around the magazine article which seem quite interesting. A new skill called a Giga Basara Waza ('Caricature Basara Technique') will be available when both characters have full gauges: the screen changes to monochrome, like an ink painting, and the number of hits greatly increases into uncharted territory. The range is said to be greater than that of a normal Basara technique. The magazine notes that using a Giga Basara Waza creates one of the magnificent Basara-e scenes I mentioned before and confirms that every warrior will have their own unique ink painting that can be used in the combinations. We can see Mitsunari's eagle, Masamune's dragon and what I assume is Kojuurou's moon at the end of the first gameplay trailer.

Indeed, one of the main themes of the article is working together with a comrade. There'll be a new system for fighting with your partner called stylish kyoutou ('team-up') action to let you direct them where to attack. Please note that this is not a confirmation of online play, so please don't think that it is - instead it's some kind of significant tactical enhancement for your bodyguard/ally, where you can direct them with a single button-press.

The last piece of news is that Sengoku Basara has risen from 26th place in Famitsu's Most Wanted charts to 21st place. Hurrah!

Update 31/07/2013: KobaP has updated his blog to announce that this second batch of information will come out today (it's already 1st August in Japan) and that fans should check the official website soon. I'm assuming we should have the higher resolution pictures of the three new characters by the end of the week.
Update 01/08/2013: Managed to update earlier than expected.
Update 01/08/2013: Pictures from the magazine can now be viewed on Gamer, Dengeki and 4Gamer. And, as promised, on the official website. That was quick! I've decorated my post accordingly. The next official website update will be on 8th August when they open up the three new character pages.
Update 01/08/2013: A few people have spotted that the characters are fighting characters from Shimazu's forces in some of the screenshots, which bodes well for the return of Yoshihiro later on.
at 7:47:00 am