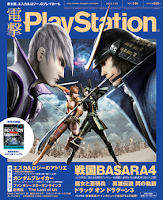 Tomorrow's issue of Dengeki Playstation magazine in Japan has been blessed with a Sengoku Basara 4 cover showing all four of the currently-revealed playable characters in action.

As the magazine is not technically available yet at the time of this post, this preliminary information comes straight from Twitter user mariko_zero.

Naturally, there's an article about the game inside the magazine billed as an introduction to the game system. Most of the information repeats what we were shown in last week's Famitsu but there are additional details in the form of an interview with series director Yamamoto Makoto (YamamotoD) and producer Kobayashi Hiroyuki (KobaP).

Again, please note that this is my preliminary interpretation of a summary written by someone else. Until the actual magazine arrives this summary should be viewed as incomplete.
The pictures used inside the magazine are reportedly mostly the same as Famitsu's from last week. 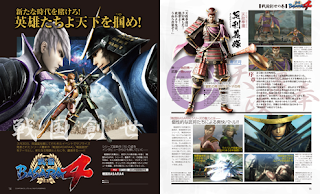 My copy of the magazine will be arriving a little late so expect gradual updates to this post as I confirm more details.

The next details about the new game should start appearing over the weekend when the Butai Sengoku Basara Busho Matsuri 2013 stage event takes place. I'm also expecting preorders to open for the second issue of Basara Magazine very soon, along with a formal announcement of the next wave of new manga and goods (the new Takedagun Chronicle manga anthology is still technically unannounced even though it will ship in less than three weeks!).

Update 17/07/2013: My copy of Dengeki Playstation arrived! Here's a summary of some additional snippets of information I gleaned from the full article.
Additional notes about the designs of the characters...
We also got to see a colour preview image of the exclusive mame-style Yukimura rubber strap which will be included with next month's issue of Sengoku Basara Magazine. 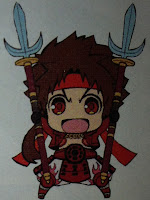