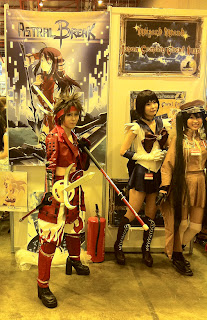 Yesterday, I popped into London to spend a few hours at this year's Hyper Japan exhibition. The event is being held between 26th and 28th July this year to celebrate the usual blend of Japanese traditions and pop culture.

My group had purchased 'fast track' tickets in advance this time, which gave us the right to join a much smaller queue and enter as soon as the doors opened at 9:30 on Saturday morning. Separate queues had already formed for general entry and for last minute customers who wanted to buy tickets on the day.

I cannot praise the organisers highly enough for how well they managed the entry system. Unlike with MCM Expo events, where buying an early ticket means you'll probably be trapped in an airless hall for an eternity waiting to be allowed in, Hyper Japan started precisely on time and we were through the doors within minutes. They even had large posters on display showing the timing for the various stage events that were running throughout the weekend, making it easy to plan activities without having to ask the staff what was going on.

The venue for Hyper Japan has moved around the corner to the large Earls Court Two building. The event actually felt slightly smaller than last year's Christmas show in spite of the bigger hall; there seemed to be fewer exhibitors and celebrities overall. Still, the large hall meant there was plenty of space around the stages. Walking around the booths was pleasantly cool in comparison to the heatwave outside.

The first order of business was to enjoy a light brunch before the food court became too busy later on. My friends all went with various types of donburi; I chose a tasty pumpkin croquette set. Other options included takoyaki, taiyaki, okonomiyaki, ramen, yakisoba, sushi, dorayaki, ice cream and shaved ice (kakigoori). The venue's cafes were also selling the usual sandwiches and coffees for the benefit of visitors who weren't interested in Japanese food.

As we dined, members of my group were asked to complete a questionnaire to assist with a new restaurant venture that was being planned. We were given some tasty snacks as a reward!

Once we were satisfied it was time to begin our tour of the various booths arranged around the venue. The organisers had grouped similar stands together so navigation was very simple; there were distinct areas for tourism, fashion, crafts, games, anime and so on. The remaining space was left for the stages and seating areas around the food court.

Because the booths were separated into themed areas, we didn't have to keep zig-zagging across the hall in a desperate attempt to find things as we do at MCM Expo. Everything was exactly where I expected to find it and the walkways weren't blocked by confused people desperately looking around them to try to work out where to go next. I love the organisers for their attention to this kind of detail. It makes the experience immeasurably better.

The stands were varied with a lot of activities on offer, enhanced by the strains of karaoke from one of the smaller stages nearby. Japan Craft were demonstrating their intricate puzzle boxes, while adult attendees were treated to sushi tasting and cooking lessons around the edge of the food court. Nearby, the Alpha Japanese Institute in London was promoting its language study courses by teaching people how to draw kanji onto disposable fans. I bet those fans proved very useful to customers leaving the venue once the sun was shining later in the day!

The traders were mostly piracy-free again. I didn't spot a single bootleg CD or artbook, only a handful of unlicensed plushies and costumes in the fashion area. JP Books had a surprisingly vast range of Sengoku Basara books on sale, almost tempting me to buy second copies to reward them for their decision.

The staff at the Third Window Films booth indulged me in a moan about the inconveniences of Blu-ray regioning during an enjoyable chat when I purchased a DVD copy of For Love's Sake (Miike Takashi's recent musical adaptation of classic shounen manga Ai To Makoto). It was a delight to see a company which genuinely loves its own material; I'll have to take the time to visit them again at future events. We're very lucky to have a group releasing quirky Japanese live action material in this country.

Another stand which caught my eye was the one belonging to Daisuki. It's encouraging to see that they consider the UK important enough to spend time exhibiting here and they had some great offerings. Fans who signed up for their service and entered their giveaway live at the event were given a Monogatari postcard to take home, while there were chances to win Daisuki t-shirts, flash drives and other goodies if you followed them on Twitter or Facebook.

They also had a large cabinet set up to display the items on sale in the Daisuki shop or available as prizes in the giveaway campaign. It allowed fans to see the figures close up and realise how nicely made they were.

With all of the decorations heavily featuring their special Monogatari second season simulcast and footage from Bakemonogatari playing, I think the Daisuki message came across loud and clear. The fact that they were the only anime distributor with a proper presence at the event helped - though I noticed Manga UK had arranged for United Publications to promote their DVDs in a semi-official capacity. They weren't the only company who had partnered up with someone else: the UK edition of Weekly Shonen Jump had a colourful banner on display as part of the JPU Records stand. All they were doing was taking contact details for their mailing list, sadly.

Kodansha were running a large booth/shop packed with their biggest manga titles. Attack On Titan (Shigeki No Kyojin) was being pushed the most heavily - and rightfully so, as it was in high demand. United Publications even had a sign up on Saturday morning warning customers that they had already sold out of the first volume.

I noticed a large number of cosplayers were dressed up as Attack On Titan soldiers, too. Cosplay isn't quite so ubiquitous at Hyper Japan as it is at MCM Expo, but that didn't stop people dressing up as anime/game characters or donning their best Japanese-style fashion outfits. Vocaloid was particularly popular.

Of course, my favourite series wasn't very easy to find. The only Sengoku Basara cosplayer we saw was this excellent Sanada Yukimura, tirelessly posing for an endless stream of photographs in a quiet part of the hall. Yukimura was representing Japanese cosplay group Wizard Wand.

One of the biggest surprises this time was that the stage events seemed much more low-key than before. Perhaps I was spoilt by the big names we were treated to last Christmas. Anyway, the best of the stage events on Saturday and the only one my group sat down and watched properly was a rakugo performance by a lady called Diane Kichijitsu. I'd never had the chance to see rakugo live on stage before so I didn't want to let this chance pass me by!

Diane told us that she had been living in Japan for more than two decades, studying an assortment of cultural pursuits and immersing herself in traditional entertainment. Along the way, one of the activities she's fallen in love with was rakugo storytelling and she'd been studying it ever since.

And what a great performance she gave! First she took the audience through the basics of rakugo, explaining how it works and how the performer uses simple props and actions to bring their story to life. Diane kept her explanations accessible to people with even the slightest interest in Japan by drawing on British humour and anecdotes from her own experiences.

Once we were suitably primed, she used the techniques she'd described to act out 'Wonderful Japan', a story about a British man taking his first ever trip to a foreign country. The dialogue was in simple English peppered with very simple Japanese; an inspired choice for the mixed audience of Japanese-speakers and learners.

I was very impressed by Diane's warmth and the perfect way she imitated the giddy young tourist and Osaka natives in her story; if her aim was to stimulate interest in the art of rakugo, she did a great job.

Another quick tour of the exhibitor booths followed. By early afternoon, the hall was starting to get packed and we'd decided that we'd seen everything we needed. We left to enjoy the rest of the afternoon elsewhere, feeling satisfied and pleased that we'd managed to avoid the biggest crowds by turning up early.

In the end, my most significant purchase was the MegaHouse G.E.M. figure of Evangelion's Nagisa Kaworu; it was impossible to keep resisting after finally seeing him right in front of me...

Just like last year, Hyper Japan was a well-planned event which I enjoyed looking around. I enjoy it much more than MCM Expo even though there aren't as many traders (or attendees) to visit. Let's hope they run it again soon!

If you're one of the cosplayers in my pictures, please let me know and I'll link to your site (or remove the photograph if you prefer).
at 3:31:00 pm