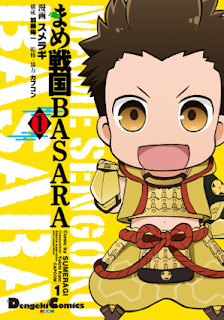 The first 119-page volume of the Mame Sengoku Basara ('Bean Sengoku Basara') manga was released by ASCII Media Works back on 27th June 2012. Priced at ¥780, it can be purchased from all good import book stores such as Yesasia, Amazon Japan or CD Japan.

The super deformed Mini Sengoku Basara Two manga series ended its run back in 2011 after two volumes and the team behind it started work on a brand new title, Mame Sengoku Basara. With composition by Katou Youichi and editorial supervision by Capcom, artist Sumeragi redesigned the characters  to be even cuter than before in the new 'mame' style.

Sumeragi's illustrations have proven very popular; they've been used to promote the official fan club in Japan as well as earning their own special lines of merchandise. The main Mame Sengoku Basara series is serialised monthly in Dengeki Maoh magazine (and occasionally in Capcom's own anthology Capbon). In addition, spin-off stories (shucchouban) are published seasonally as part of Sengoku Basara Magazine. Samples of the very first chapter of the manga can be viewed on Dengeki's website so that fans can see how the returning characters look with the new designs.

Ten chapters are included in this first volume, telling a simplified version of the events from Sengoku Basara 3 starting with Hideyoshi's defeat. Ieyasu and Mitsunari spend most of these chapters rushing around Japan to form alliances and prepare their respective armies for the future Battle Of Sekigahara.

Along the way, we get to see the other characters getting caught up in all kinds of adventures. Sourin steals the show most of the time, nearly getting away with baptising Kojuurou 'Vegetable Katakura' and later trying to set up a boy band fronted by 'Lovers Naoe' to help him preach his faith. Watching Sourin ordering Hisahide around without any concern for what might happen had me in stitches.

An impressive number of cameos are included, giving almost every warrior who appeared in Sengoku Basara 3 a chance to appear. Perhaps the older characters will be able to have their time in the spotlight as well later on.

Mame Sengoku Basara is a great title for foreign fans of the series. Its adorable artwork means that even people who can't understand the dialogue will be able to enjoy seeing their favourite characters reimagined in a different style, and the simple plot coupled with generous use of furigana makes it ideal for language students wanting to dabble in a raw Japanese manga. The series continues to run monthly in Dengeki Maoh with three collected volumes having been published to date, so we'll continue to see more Mame Sengoku Basara for some time to come.
at 11:23:00 am