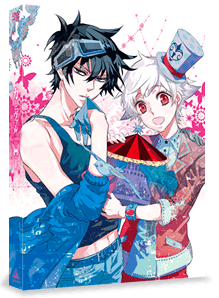 I was very disappointed when the English language streaming rights for Karneval fell into the hands of FUNimation, doomed to be locked away from the UK forever until a DVD-only home video release is announced in a few years time (if we're lucky). The show's appealing, colourful palette had been eye-catching from the outset and I'd been really hoping to watch it week by week.

Bandai Visual came to the rescue by including English subtitles on the Japanese Blu-ray release. Ordinarily I wouldn't have imported on the grounds that I hadn't been able to see the stream; blind buys are risky when the cost of entry is so high. However, this time around I felt irritated at the western anime industry's failure to serve me as a fan. I didn't want to reward them by buying their edition later on, so instead I decided to buy the first volume of the Japanese edition as a peculiar kind of protest. This also gave me the opportunity to register my purchase and send a plaintive comment straight to Bandai Visual in Japan.

Unfortunately, the first Blu-ray set only contains one episode of the Karneval anime. I'm not familiar with the manga (it's not been released in English outside of Singapore and Australia) so I'm now in the sticky situation of trying to judge whether I should be buying subsequent volumes based on less than half an hour of content. 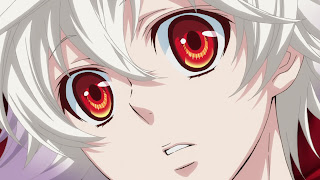 Although it's only one episode, it's a very pretty episode. The most noticeable thing about Karneval at first glance is the sumptuous artwork. Based on Mikanagi Touya's ongoing josei manga, all of the main characters are stunningly beautiful whether they're male or female. The anime staff have tried to capture the delicate use of colour from the source material by going all out with ethereal hair colours, eye colours and decorations. It's gorgeous. 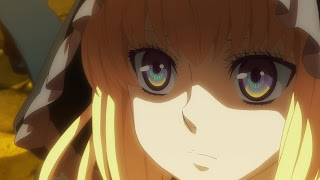 From the first episode alone it's difficult to draw too many conclusions. The storyline follows Nai, a mysterious young boy who is apparently being held against his will. Nai strikes a deal with an interloper called Gareki and the two head away on a train together. However, things don't go smoothly and they soon end up right in the middle of a hijacking incident, coming face to face with some stylish strangers with unusual powers. 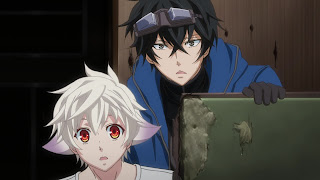 The first episode focused more on its setpieces than on background exposition, and while I was entertained throughout I realised that I had very little idea what was going on when the time came for the chipper ending theme to start playing. Some of the mysterious characters 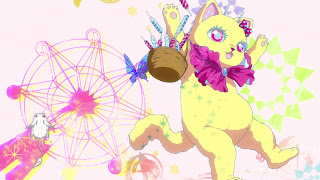 The Karneval anime is bursting with promise. Is that promise worth me spending a small fortune to continue with? I haven't yet made up my mind, and probably won't until I am placing another order which falls short of the free shipping threshold. I'd like to at least continue long enough to meet Yusa Kouji's character! 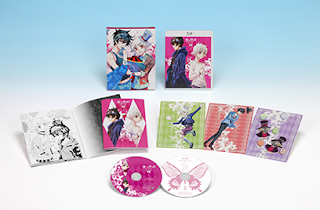 Karneval volume 1 was released in Japan on 28th May 2013 in three formats: first press limited edition Blu-ray, first press limited edition DVD or standard DVD. Only the Blu-ray edition comes with English subtitles, which were of a high standard. The only complaint I'd make is that they look strange when several characters are speaking at once as they're all the same colour; the lines are separated by dashes so it's not too confusing but it would be clearer if a second colour was used as well.

The other extras that come in the limited edition versions include a 15 minute drama CD, an illustrated slipcase, a seiyuu event lottery application ticket, a short bonus manga by series creator Mikanagi Touya, a generous booklet of liner notes and some illustration cards.

On-disc the extras are a creditless ending sequence and an audio commentary with seiyuu Shimono Hiro, Kamiya Hiroshi, Endou Aya and Ono Daisuke.
at 8:06:00 pm