There have been a lot of anniversaries lately, and indeed today marks the third anniversary since Sengoku Basara 3 was originally released in Japan. Capcom has produced commemorative wallpapers of Ieyasu and Mitsunari to celebrate this milestone, reminding fans that the Sengoku Basara 3 world continues to expand through the stage plays, manga adaptations and novels. 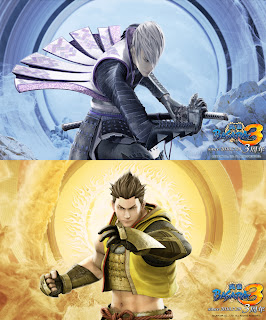 At last! Preorders for Sengoku Basara Magazine issue 2 opened late last week so I've been able to stop visiting shopping websites every day to check. So far, the most foreigner-friendly sources seem to be Amazon Japan and Manga Oh; the magazine should appear on more sites in the next week. The first issue sold out quite quickly so please don't hesitate if you want to reserve a copy of your own.

Dengeki have posted some last details about the newest Sengoku Basara manga anthology which went on sale in Japan this week, including previews of Shujuu No Kizuna ('The Bond Between A Master And Servant') by Arai Karo, Taishou Fukkatsu!! ('The General's Revival!!') by S. Kosugi, Danna To Tomodachi!! ('Master And Friends!!') by Akaboshi Tatsumi and Taichou To Yuku! ('Follow The Commander!') by Sorano. A sample of two chapters will be published in the September issue of Dengeki Maoh. 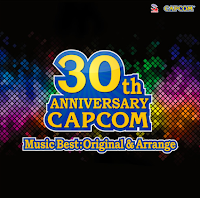 Capcom celebrated their 30th anniversary back on 11th June this year and now the official e-Capcom shop has listed a Capcom 30th Anniversary Music Best: Original & Arrange album for release on 25th September 2013. It will be priced at ¥3,000 and include a 16-page booklet.

The second 'arrange' disc will be the more interesting, giving ten popular artists a chance to rearrange famous Capcom songs in their own styles. The contributors are going to be DJ KN, ARM (IOSYS), Tetsu x Neko, REDALiCE, Deadball-P, OSTER project, sasakure.UK, SOUND HOLIC, Sakamoto Kyouju and SWING HOLIC. Details of which tracks they're going to be working on will be announced at a later date.

I hope the album receives a wider release so that I can check it out this September!

There was a short news bulletin this morning to confirm that JTB are going to host their usual official tour for the next Sengoku Basara stage play this autumn incorporating hotel accommodation, tickets to the play and 'special perks'. Full details will be available on Friday 2nd August 2013.

Sengoku Basara -The Last Party- is coming to the UK

I completely forgot to mention this at the time, but Manga UK recently announced that the Sengoku Basara -The Last Party- movie will be getting a UK home video release next year to complete the series. I imagine that most fans have already imported their copy from the US (especially after the second season of the anime was only released on DVD and with missing content in this country). However, it's a fun movie and I'm sure new fans will have life-altering experiences watching it for years to come. Preorder listings are available on Amazon UK for the Blu-ray and DVD. Both versions are scheduled for release on 4th November 2013.
at 12:10:00 pm