As I travel around the Internet I've seen a few signs that fans are setting themselves up for potential disappointments when assumptions that have been taken as fact aren't met when the game is released. It's certainly possible the rumours are true, but until an official source confirms them as fact they should never be treated as anything other than fan gossip - and I mean an official Japanese source. Many of the big English-language gaming websites have been posting fan gossip and mistranslations as fact without making corrections when notified.

I don't want Capcom to be blamed later on for not fulfilling expectations that fans inadvertently made up themselves, so this post is to collect and debunk those rumours. Let's ensure that we keep our expectations in check!

Rumours are in bold.

The game is set during the Muromachi period (or otherwise before the Sengoku period).

This is how the early news releases have been incorrectly translated by a lot of gaming websites. It is simply untrue: even the game's producer KobaP has gone out of his way to clearly, unambiguously confirm that the game starts at the end of the Muromachi period and covers the Sengoku period. This is still Sengoku Basara.

The game is a prequel.

It's an alternate retelling, starting from the beginning. This doesn't mean we'll see earlier versions of all the characters, and nor does it mean we will/won't see any particular characters based on the years they were historically active in the real world. The parallel universe explanation means that the game is free to cover events from all across the Sengoku period.

I've seen a lot of people stating that the game is coming out on a particular day. Nothing about its release date has been announced yet and the official website repeats the same information we've had in the trailers: the game is planned for the start of 2014. Anyone who gives an exact date at this point is making it up.

Famitsu magazine showed Masamune with a new move where he holds six sword in one hand.

Famitsu magazine showed a picture of a Masamune holding his swords in one hand and performing a horizontal slash, which fuelled fan speculation that he was performing a brand new attack. 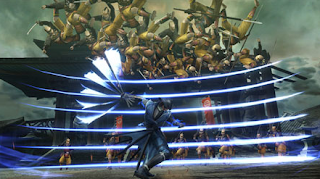 The image actually shows his existing signature move 'Phantom Dive'. It's possible that this rumour has gathered speed because he didn't have 'Phantom Dive' in Sengoku Basara 3 (Sengoku Basara Samurai Heroes) and many English-speaking fans have only played that game. He already regained it in the Sengoku Basara 3 Utage expansion, however, so please don't expect anything to come of this misunderstanding later on!

Not true. There's absolutely no precedent for them cutting any playable characters this time (though that's not to say that they won't). I talk more about this phenomenon here.

My favourite character has been removed from the game!

So far, Capcom has formally announced a total of five characters for Sengoku Basara 4. It's normal for the character announcements to gradually appear to build up hype, so just because your favourite commander isn't in the first batch of characters doesn't mean that they won't appear later on and be just as important in the game itself. Sengoku Basara 4 will definitely include more than five characters by the time it's ready for release (even the very first game in the series had more than that!) and there are so many amazing warriors in the series that it's impossible for them to announce them all at the same time.

Yukimura has been removed from the game (or replaced by Sakon).

No. While it's true that Yukimura will probably have less significance than usual this time around and his omission in the first batch of announcements was a big shock, it's extremely unlikely that the staff will remove one of the most popular characters in the entire series for no reason. His absence from the promotional material so far is most likely because they've deliberately only shown materials relating to the characters they've already announced. It's important to remember that not being one of the central characters doesn't mean missing out on having a good storyline - Motochika and Motonari are both very popular with their own books, stage play, merchandise and drama CDs, even though they're never more than background characters in the games.

Yukimura had a terribly depressing time in Sengoku Basara 3 (Sengoku Basara Samurai Heroes) and his popularity dropped below that of newcomer Mitsunari. I expect that he will be headlining one of the next batches of character announcements to make fans sit up and take notice - and I also think that he'll be back to his old, enthusiastic self this time around, taking advantage of the 'parallel world' scenario. With Yukimura being the star of the recent Takarazuka musical, the next issue of Sengoku Basara Magazine and the Takedagun Chronicle manga anthology this month, we can be certain that he isn't going away any time soon.

Ieyasu has been removed from the game.

As above. Even though Ieyasu is the least popular of the four main characters from Sengoku Basara 3 (Sengoku Basara Samurai Heroes), he still has a lot of fans. Please don't lose all hope after the first of many character announcements.

Nobunaga will be a major part of the game.

This is based on fan speculation that one of the silhouettes in the first teaser trailer was Oda Nobunaga; however, in the end the silhouette was actually Shima Sakon. While Nobunaga is certain to feature in the game in some way - he's a key part of Katsuie's back story - we've had no formal confirmation that he'll be playable or a major character himself.

A younger Nobunaga will appear in Sengoku Basara 4.

As above. The young Nobunaga rumour is based on speculation that the silhouette matched an old piece of concept art showing Nobunaga in his youth; a reasonable theory at the time. Now that we know that the silhouette was someone else and they won't be making everyone younger for the game, there's no reason to think that anything will come of the 'young Nobunaga' idea. I'd like to see it explored as an alternate costume one day if possible.

Hideyoshi will be playable in Sengoku Basara 4.

Hideyoshi is in exactly the same position as Nobunaga so far: we know he'll be relevant to the game's plot and appear in cut scenes, but there's been no formal confirmation that he'll be playable. Yet.

Update 31/07/2013: Hideyoshi is now confirmed as a playable character in Sengoku Basara 4!

The plot of Sengoku Basara 4 revolves around Ashikaga Yoshiteru trying to take over Japan.

It's the opposite! Yoshiteru has relinquished his title as shogun in order to stir things up in monotonous times. His long term plans aren't clear, but whatever they are it's unlikely that the staff have been lying to us about the plot of the game so far.

Japanese fans are ruining the series by voting for pretty boys in the popularity polls.

This one personally annoys me. The popularity rankings are made by surveying fans who purchased the games close to their release date and received a voting ticket, i.e. the biggest fans of the series who are supporting it by buying the games at full price. Capcom wants to please this kind of fan more than anyone else. There's no evidence that people are buying thousands of copies to cheat. The popularity ranking is supported by the merchandise sales for each character, online fan activity and the reactions that the hardcore attendees give at live events. Capcom know exactly which of the Sengoku Basara characters the core fans want in the new games.

I wish that people wouldn't criticise the outcome of the voting unless they also participated. There is no reason a fan who purchased the game can't submit a vote from overseas now that it's all done online.

The Busho Matsuri (Butai Sengoku Basara Bushou Matsuri 2013) event was a stage play, or was a disappointment with less game news than usual.

This year's event was actually the first ever Busho Matsuri so it cannot be compared to anything else. Unlike the Basara Matsuri events which which focus on the games and the series as a whole, Busho Matsuri is an event specifically linked to the Butai Sengoku Basara stage plays. It was always marketed that way and the Sengoku Basara 4 news was a late addition to the schedule (along with the handful of seiyuu guests).

Please note that Busho Matsuri is not a stage play itself. It has the actors performing highlights from the earlier plays in their costumes, but it's very much a fan gathering. Click the Video Reviews tab on this site to see my summaries of every stage play to date other than Butai Sengoku Basara 3 Utage (due for DVD release soon) and Butai Sengoku Basara 3 Utage Two (which was just announced).

This rumour originated from a Siliconera news article. The writer has translated information about the new battle system by choosing words which accidentally imply that Capcom has confirmed the return of the beloved tag mode for the game. Tag mode last appeared in Sengoku Basara 3 Utage; it provided a very polished experience and it would be easy to add it to the new 'war comrade' mechanic to allow the player to switch between their two characters. It's likely it will be back. However, it's not been confirmed to date. All the Siliconera post means is that your two characters (the main one and the 'war comrade') will be able to perform 'tag team' Basara attacks, i.e. the new Giga Basara techniques.
at 10:08:00 am