This week's most thrilling news has come via weekly Famitsu magazine, which has allegedly promised a preview article about Sengoku Basara 4 in next week's issue. User BlackKite on the Koei Warriors forum kindly posted details here. It looks as though the article will include the first solid information about the main character(s) in the game.

The issue in question officially comes out on Thursday 4th July; as it's so popular people usually start to post news from it earlier than that so we can expect the first leaks on Tuesday/Wednesday depending on your time zone. I don't subscribe to Famitsu and even if I did shipping times would mean I wouldn't receive copies until the news is well out of date, so I'll be poring over their website and fan communities next week like everyone else.

To add even more excitement to the mix, the issue of Dengeki Playstation magazine due for release on 11th July is said to include a special feature about the new game and come complete with a Sengoku Basara 4 cover!

Promotion has finally begun for the Sengoku Basara Kagaku Kenkyuujo book I mentioned before, combining Yanagita Rikao's Sengoku Basara Science Laboratory posts which I once translated for this blog and some extra material produced especially for the physical edition. You can see a sample of the final version in this tweet.

The product listings have been updated to advise that it will include all eighteen blog posts, four additional posts and extra material from Yanagita's Kuusou Kagaku series (which has featured Sengoku Basara before). Two new 'versus' articles have the titles "Date Masamune VS Sanada Yukimura" and "Yousai Fugaku VS Teruhi No Ookagami", referring to Motochika's maritime fortress Fugaku squaring off against Motonari's 'Solar Nexus' mirror.

More characters to debut in the Mame Sengoku Basara manga

Artist Sumeragi has tweeted a pair of sample pictures from the next chapter of the cute Mame Sengoku Basara manga, promising that tomorrow's issue of Dengeki Maou will include two stories: one about Sanada Yukimura encountering Satake Yoshishige, the other featuring Mouri Motonari facing Anegakouji Yoritsuna. I get irrationally excited whenever the non-playable regional warlords from Sengoku Basara 3 show up so I can't wait for the next graphic novel to hit bookstores.

That was quick! The DVD edition of the recent Takarazuka musical based on Sengoku Basara has now been listed with a release date of 17th September 2013 and a price of ¥8,400. Takarazuka DVDs tend to be expensive... not that I'll let that discourage me from buying this unique take on the Sengoku Basara world!

This is so unsurprising that it hardly qualifies as news at all and I forgot to report it for weeks. I mentioned that the Sengoku Basara Card Heroes Matsuri mobile game was running a character poll recently; the winning warrior was going to be announced as part of the game's anniversary event and feature on a unique new card. Well, in a development that nobody could have possibly seen coming, Date Masamune took the honour of being named the most popular character in the series once again. Congratulations, Masamune! Here's the illustration that was used on the special card. 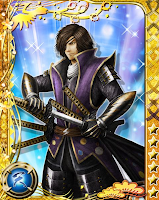 Perhaps we'll be treated to a new character poll for the main game series once Sengoku Basara 4 comes out.
at 10:13:00 pm