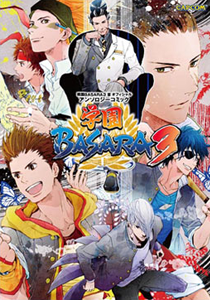 Gakuen Basara 3 came out in April 2012 and covers Sengoku Basara 3 Utage. It's more of the same, in other words, only this time Matsunaga Hisahide makes his long-awaited appearance as an extremely creepy vice principal.

The cover is by Nari as usual and inside there are colour pages by Waganeya Takumi and Yukihiro Utako. Rough sketches by Arai Karo showing how the characters were redesigned are included between chapters along with a handful of humorous school report cards. There are 164 pages in total.

The overall theme of each story is usually Hisahide annoying someone in his unbearably self-serving way. Here are some very brief summaries of the individual stories.

Basara Gakuen ~ Utage~ Kaien (Basara Gakuen ~Utage~ Opening Ceremony)
Arai Karo
Hisahide is introduced, and it isn't long before he's forcing everyone to reflect upon (and squabble about) their personal treasures in a madcap opening chapter. The first chapter's purpose is to introduce the cast, so a large number of characters appear.

Nekketsu!! Sanada-ryuu Yowamushi Kokufuku Doujou (Hot Blooded!! Sanada-style 'Overcoming Wimpiness' Dojo)
Yanagi Batoshirou
Kingo appears before Yukimura, begging him to give him the courage to be less of a wimpy crybaby. Yukimura attempts to comply (with some help from Sasuke and some of the other pupils). Even with everyone helping, it may be impossible.

Mezame Yo! Souryuu ~Karei Naru Shinshi No Inbou~ (Wake Up! Twin Dragons ~The Conspiracy Of A Splendid Gentleman~)
Sanorin
Kojuurou has to save the baseball club all on his own after Masamune falls into a slump, and sneaky teacher Mogami Yoshiaki is being unusually helpful.

Neppuu!! Toshokan Gassen (Hot Winds!! Library Battle)
Rokuji
Almost everyone in school gets dragged in to a huge fight about which book deserves to be the monthly recommendation in the school library.

Atsuki Kizuna No Hate Ni (To The Limits Of Hot Bonds)
Toriumi Mihoko
Ieyasu tries to teach Motonari a lesson about the power of bonds, and this time he might have met his match...

Sarutobi Jouhou Chou: Kaen No Maki (The Sarutobi Information Book: Flame Chapter)
Minami Seira
This story was my favourite. Sasuke decides to follow Motochika around in search of some juicy gossip he can use about his schoolmate's turbulent life. Sasuke's sneaky personality makes him a great protagonist even in a school setting.

Kataomoi Dodgeball (Unrequited Love Dodgeball)
Maki
Tsuruhime and Kasuga argue ridiculously about the men they love and stalk. Hisahide steps in to finally solve their problems, in his own special way.

Yumekichi Wo Sagashite (Searching For Yumekichi)
Mikami
Yumekichi has gone missing at school and Keiji is distraught. Naturally, everyone he meets wants to help him find his lost friend.

Tomogaki No Uta (Song Of Friends)
Danbo
Mitsunari picks a jealous fight with Keiji over how close he was to Hideyoshi back in the old days.

The large gap between 2010's Gakuen Basara 2 and this next volume has brought with it a new generation of contributors; Rokuji, Minami Seira, Maki, Mikami and Danbo are all newcomers who would go on the participate in later volumes. Veterans Sanorin, Yanagi Batoshirou, Toriumi Mihoko and Arai Karo are back again too, having worked on Gakuen Basara since it began their presence keeps the feel of the series consistent.

The addition of colour illustrations at the beginning of the book is definitely a welcome touch, making Gakuen Basara 3 feel more modern and luxurious than its predecessors. It seems to have been successful in relaunching the series; the subsequent volumes would follow at a more regular pace than before.
at 10:14:00 am