News roundup: Takarazuka's Sengoku Basara begins, as does the countdown to Busho Matsuri

The brand new Sengoku Basara -Sanada Yukimura-hen- Takarazuka musical seems to have attracted the attention of some stars. There are often messages from anison singers at Sengoku Basara events and sure enough, Mizuki 'Aniki' Ichirou popped by for the final dress rehearsal today so he could tweet a picture of himself at the venue (prompting singer Kurosaki Maon to reply that she was jealous). Other celebrities who went to see the preview included Usami Yuuki, Kaneda Shinichi and Kyan 'Kyan-Chi' Chiaki. Loyal Sengoku Basara fan and seiyuu Furukawa Toshio was back again with a mini-review; he mentioned seeing Han Megumi and a number of the seiyuu from the game series in attendance.

Those of us who aren't lucky enough to be Japanese celebrities on Capcom's special guest list can console ourselves with the first photographs from the performance. I've seen picture reports on the Famitsu, Mantan Web and Crank-In websites; Famitsu's coverage seems the best so far.

Update 16/06/2013: There are now more photo reports up at MyNavi, 4Gamer, Living, Otakuma, Gamer, TV Life and Takarazuka Journal. Some of those shots show that the story is going to be interesting!

With less than a month to go until our next scheduled Sengoku Basara 4 update, Capcom recently made a big update to the Busho Matsuri website to keep attendees informed. I'm going to take this opportunity to summarise everything we know about the event so far.

Opening act
All of the stage play actors will participate in a thrilling opening act, just like those from Butai Sengoku Basara!

Daienkai corner
There will be a feast of party tricks from the stage play along with some brand new stunts.

Special talk show 'Hinadan Basara'
All of the stage play warriors will be assembled as though on a hinadan (this is the special platform used to display dolls for Hinamatsuri in Japan).

Requested combat
A feature where the actors will perform fights on stage according to requests from fans. There should be some unusual character match-ups.

Autumn stage play information corner
Details will be announced for the next stage play run due for autumn 2013.

Ending
An 'ending party' with the 'magnificent' actors. 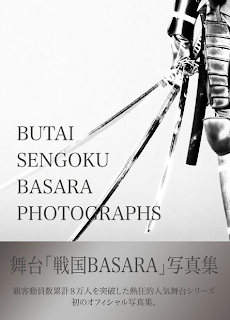 Naturally, each show will be different as most of the stage events are going to be relatively unscripted. Please also note that the word 'corner' doesn't mean a physical part of the event hall; it will be a stage presentation as usual.

We can expect the gaming press to be present at Busho Matsuri to report on the Sengoku Basara 4 announcements, which will probably include more clues about Ikeda Shuuichi's role in the game (or better yet, the name of the character he will play). Footage has been mentioned too, so perhaps we'll get a new teaser trailer on the official website the following Monday?

Fans are understandably eager to know why Mitsunari and Hideyoshi have been chosen as the seiyuu guests for the second performance so it's possible that there'll be a second wave of news later on Saturday evening. There are no guests at all listed for the Sengoku Basara 4 presentation on Sunday. It might be a simple recap of the details from the day before, or it could mean that there might be a surprise guest or two.

As exciting as Sengoku Basara 4 is, the new stage play information is likely to get a lot of attention in the press as well, particularly if they unveil the new actors for Date Masamune and Sanada Yukimura. It's even possible that the replacement actors will be attending the event as surprise guests alongside Kubota Yuuki and Hosogai Kei.

There was another update on the Sengoku Basara website this week to reveal one of the items which attendees will be able to purchase at Busho Matsuri: Butai Sengoku Basara Photographs, a book collecting pictures from the history of the stage plays. I hope it will be made available at a later date for people who can't go to the event; it looks like a lovely memento and this is the first book of its kind for the series.

Capcom and Zoff team up for a new range of eyewear 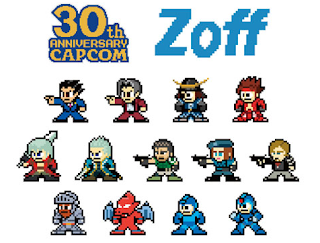 Zoff previously made the Sengoku Basara-inspired 'Datemegane' glasses themed around individual warriors from the series.

We now have a cover for volume 5 of the Sengoku Basara 3 Bloody Angel manga I mentioned the other day. Itou Ryuu has produced another Mitsunari illustration to match the previous four books in the series. The listing on the e-Capcom store confirms the release date will be on 9th July 2013 and the price will be ¥580. Nothing has yet been announced about the other new Sengoku Basara books that have been silently listed for July. 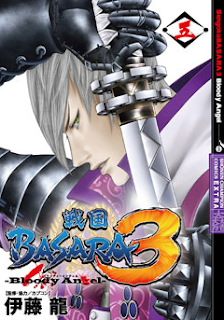