First of all, there's some minor news about the Sengoku Basara anime series in the UK via the local license holders, Manga UK. The series has had a rocky history here; the first series had an optimistic release as separate DVD and Blu-ray sets back when the latter format was still struggling to catch on, and as fans of the anime might know, the English-language releases have fewer extras on the DVD editions (most notably, some of the cute Mini Sengoku Basara shorts are missing). Although I bought a copy to show support and bullied half a dozen friends into giving the show a try, it seems that the first season sold poorly enough that at one point Manga UK's representatives were saying the second season of the anime wouldn't be coming over here at all.

Funimation in the US dutifully released a DVD/Blu-ray combo pack for the second season complete with chipboard box and preorder bonus, and for a while it looked as though fans in the UK would have to import. Until Manga UK abruptly changed their mind and released the second season as a barebones DVD-only collection - which I cannot recommend to anyone since once again, several of the charming Mini Sengoku Basara shorts aren't included. In spite of this I'd assumed that the theatrical movie Sengoku Basara -The Last Party- would make its way over to this country in due course to complete the series; films tend to sell better than television anime, after all.

However, the likelihood of the movie ever making an appearance here seems to have hit a major snag. There was an interesting segment on the most recent Manga UK podcast (#18) where a fan asked whether the company would be licensing any more shoujo or josei anime titles for distribution in the UK.

Manga UK representative Jerome struggled to think of any shoujo in the company's anime catalogue off the top of his head and eventually chose Sengoku Basara as his example. A rough transcript of the answer follows (if you want to check the full version, skip to 73:30 in the podcast linked above).

"Isn't Samurai Kings/Sengoku Basara josei? Because that's purely aimed at women in Japan and that's why it did so badly here (laughter). It's a male-centric action show which for all intents and purposes looks like shounen - but it has not connected with the audience in the UK at all. It's bizarre. The audience for Sengoku Basara in Japan is more mature women; it's weird. Apparently it's because they really like the eye candy, they like the male characters, they like... you know, the stuff. We bought it probably under the misconception that it was shounen and based on a Dynasty Warriors style video game with a lot of melee battles and action; and there is a lot of action in this show. It started to ring alarm bells when the licensors took me around an Animate store in Shibuya that caters primarily to female otaku, and Sengoku Basara was everywhere. It was the biggest... (JC: Mature female otaku are only 12% of the otaku audience, so that's immediately cutting out 88% right there.) Yeah, that's sad. So probably no; unless the show is really doing well in Japan, getting good simulcast numbers overseas and a fair bit of hype and it comes to our attention, then probably no, I'm really sorry - it just doesn't sell enough."

Well. Looking past the complete dismissal of the male fans the series seems to have overseas (and the number of female fans who buy shounen), I think Manga UK's release of the first season was one of their better quality productions  - they even timed it to coincide with the disastrous European release of Sengoku Basara 3 (Samurai Heroes). Perhaps they were simply expecting too much. Jerome started to say it hadn't connected with the "Naruto audience" before changing his wording, and if their hopes had been that high then it's no wonder that the Sengoku Basara anime ended up being a bitter disappointment in comparison. Nonetheless, it's a shame that the series sold so horribly and I'm surprised at the lack of interest from my fellow countrymen. What went wrong? 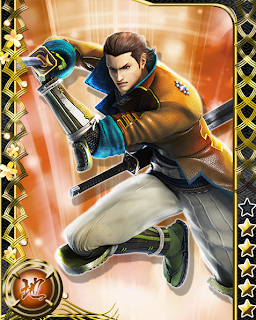 Anyway, on to some similarly unimportant news from Japan! Mobile game Sengoku Basara Card Heroes Matsuri is celebrating its first anniversary on 29th May 2013 with a series of in-game events.

Users who log in during the campaign's 'coundown period' between the 21st and 29th May 2013 will receive a SR Katakura Kojuurou card (pictured). Kojuurou often seems to be used for rewards when it comes to the Sengoku Basara mobile games - not that I'm complaining!

Once the countdown has finished, players are assured that there'll be more to look forward to with additional festivities until 4th June 2013.

Most mysteriously, there will be a new card created for the character who received the most votes in the in-game popularity vote which took place from 30th April to 8th May 2013. There'll also be various stat bonuses and a limited edition Date Masamune card to buy.

I want to see the results of the character poll most of all. The demographic of players who would vote in the mobile game is slightly different to usual, so there might be some weird surprises. 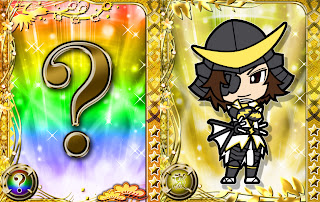