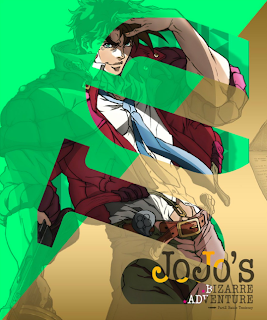 After the excitement of the third volume of JoJo's Bizarre Adventure, I couldn't wait to watch the next one as soon as I took delivery of the Japanese Blu-ray edition. Volume four contains episodes ten to twelve, the start of the second major arc of the JoJo saga.

The Battle Tendency or Sentou Chouryuu arc shifts the story from 19th century Great Britain to the prewar USA. The Phantom Blood arc's Jonathan Joestar has now been replaced by his grandson Joseph, a feisty young man with a talent for attracting trouble and striking stylish poses for no reason. He also has a habit of performing mid-fight commentary to confuse his opponents.

Joseph's considerable charm is enhanced by the inspired decision to cast Sugita Tomokazu as his seiyuu. Sugita reels off the ridiculous dialogue with the perfect cocky self-confidence needed to make Joseph a memorable lead right from the outset; even though I've developed a strong resistance to wisecracking American youths over the years, it's hard not to root for the guy when he's so gung-ho! Joseph seems quite different to Jonathan, sharing only a similar fighting style and sense of personal honour. His grandfather's naïveté is nowhere to be found.

Although some other familiar faces soon appear to tie the new adventure in with the Phantom Blood arc, this is a different story and things swiftly move on to an all-new struggle.

After going from fight to fight in the big city, JoJo finds himself travelling from his home in New York City to Mexico, following a rumour about an old friend he can't ignore. It's in Mexico that he stumbles upon a lair of crazy German militants.

The Germans are trying to revive an ancient 'pillar man' called Santana. It's obviously a bad idea, but their crazy leader, Rudol von Stroheim, is determined to unlock the secrets behind the sleeping man and unafraid of sacrificing a few innocent natives in the process. I have to pay tribute to seiyuu Imaruoka Atsushi for providing Stroheim with a unique voice which cracks magnificently whenever he gets excited (which is often).

While the ending song is the same song as before with a different video, starting in episode eleven we're treated to a completely new opening theme. Amazingly, Coda's BLOODY STREAM manages to top the brilliant opening from the first season! I've had the camp-yet-manly song on my playlist for months now; hearing it play at the start of every episode is a real treat. Even the opening sequence itself is a thing of beauty where the Japanese credits join in with the flamboyant colours and retro displays of hot-bloodedness. It's not an exaggeration to say that BLOODY STREAM is probably one of the best openings I've seen in all of my years watching anime. 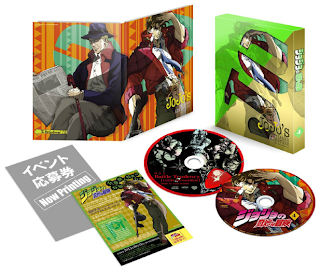 JoJo's Bizarre Adventure volume 4 was released on 26th April 2013 on special edition Blu-ray or DVD. The standard Blu-ray and standard DVD will appear when the first press versions have sold out.

The first press DVD has its traditional bonus slipcase (pictured here). The first press of the Blu-ray comes with the usual English subtitles and proof of purchase voucher. The additional bonus item for buyers of the first press Blu-ray edition this time is the second special soundtrack CD, Battle Tendency [Leicht Verwendbar], containing 26 music tracks composed by Iwasaki Taku for the second part of the JoJo anime. There is also a ticket lottery number (now expired) which gives the owner a chance to win a ticket to one of two JOJOraDIO events taking place on 23rd June 2013.

I noticed a couple of typos in the English subtitles in this volume; par for the course with western releases but noticeable after the lack of obvious errors thus far. That or they were going for a very stereotypical cockney accent for Speedwagon's remark "That suit were a gift...". An extra proofread to tighten the subtitles up would have made them perfect.

On-disc extras are the creditless opening and ending sequences. Like the original, the new ending video shows different characters as the story progresses. Only one version appears in creditless form and that's the newest ending so far (from episode twelve).

The Battle Tendency arc has begun in style with all of the panache I expect from the JoJo's Bizarre Adventure series and including a soundtrack makes this set an even better deal than usual. Highly recommended.
at 3:59:00 pm