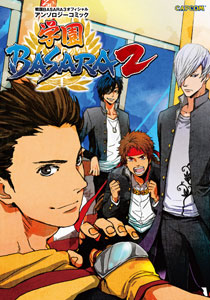 The 160-page Gakuen Basara 2 manga spin-off came out in December 2010 and ties in with Sengoku Basara 3, reimagining all of the characters from the new game in an 'alternate universe' school setting. A few of the new characters appear on the beautiful wraparound cover artwork drawn by Nari. There's still no colour art inside the book, though there are rough character sketches in between chapters by Sanorin, Yanagi Batoshirou, Matsuura Hako and Koutake Hiroyoshi.

Here are brief summaries of the ten individual stories in the form of a chapter list.

Basara Gakuen Returns
Sanorin
The first chapter is a chaotic jumble to introduce the Gakuen Basara 2 scenario. The theme of this volume is a student election so Ieyasu is facing off against Mitsunari in a parody of the game's lead up to the battle of Sekigahara. All of the Sengoku Basara 3 characters are squeezed into the story.

Keiji: Koi No Chuukan Tesuto (Keiji: Midterm Test Of Love)
Kyuugou
The second chapter provides a change of pace, focusing on Keiji's one-sided love for Magoichi. Tired of being followed around, she forces Keiji to agree to improve his exam scores overnight. In his desperation he turns to the other students for help...

Bunkasai No Tatakai: Bouryaku (Battle Of The School Culture Festival: Conspiracy)
Matsuura Hako
Everyone is looking forward to the traditional culture festival at school. However, some students have a dark plan to sabotage the event and further their own agenda.

Houkago! Makyuu No Ran (After School! The Miracle Ball Riot)
ENU
Ootani Yoshitsugu tries to spread some misery around by encouraging Masamune to antagonise Motochika in order to learn a new baseball technique. Unfortunately, things don't quite go as Yoshitsugu had expected.

Teimei Suru Omoi Wo Uchiyabure!! (Conquering Gloomy Thoughts!!)
Akuta Michi
Shingen's recent injury has left Yukimura terribly depressed. Kenshin's taking it hard too, which is affecting Kasuga. Can Sasuke cheer everyone up on his own now that Oyakata-sama is out of the picture?

Koi No Karamawari (Love's Wasted Effort)
Tamamushi
Tsuruhime is desperate to get closer to Fuuma Kotarou, her mysterious saviour. She takes some advice from Magoichi but even with Sasuke and Keiji helping, her plight seems impossible.

Nin*mu*Zen*Sen: Ijou Ari! (Front * Line * Mission: Weirdness Included!)
Toriumi Mihoko
Now it's Sasuke's turn to fall into a slump. The school newspaper is struggling due to the lack of interesting news stories lately, so he heads out on a quest to find something worth writing about. The teachers end up running rings around him and his assistant Tsuruhime isn't much help at all.

Hoken-i No Oshigoto (The Work Of A School Doctor)
Atarou
Doctor Tenkai craves some excitement in his life, so he forces Kingo to gather some of his fellow students together for some 'special' nabe stew. Poor Kingo wants to please everyone and has trouble making the right choices.

Kanbee No Junan To Yuuutsu (Kanbee's Suffering And Melancholy)
Koutake Hiroyoshi
Yoshitsugu takes every opportunity to pick on Kanbee, who is desperately searching for a way to escape his shackles (here, they're attached to a heavy tyre rather than an iron ball). Thanks to one of Gyoubu's tips, he ends up going on a wild goose chase in an old school building in search of the key. Kanbee's misery is soon worsened by the arrival of Nobunaga and Oichi.

The war is heating up between the student council election's frontrunners, Ieyasu and Mitsunari. Ieyasu is taking everything in his stride, as usual, while Mitsunari is having a hard time. Gyoubu provides him with moral support and gradually brings the western army together. Will Ieyasu's popularity be enough to counter what Mitsunari's easily-manipulated group is planning?

For a long time, Gakuen Basara 2 seemed to be the last in the series; it wasn't until April 2012 that the  third volume suddenly appeared. Many of the artists who feature in this anthology would end up moving away from the series during the gap. Kyuugou, ENU and Matsuura Hako would end up returning for later contributions, but Akuta Michi, Tamamushi, Atarou and Koutake Hiroyoshi have yet to rejoin the Gakuen Basara world. This is the only volume which contains their work on the series.

This second volume of Gakuen Basara felt even less focused than the first due to the large number of new characters, not helped by there having only been one previous book in the series to introduce everyone else. It would have been less confusing if there had been one book per game to give the creators more time to settle into the Gakuen Basara world. Still, the stories are rather entertaining and even when the main jokes fall flat, the dialogue and parodies of situations from the main Sengoku Basara games make these anthologies very fun to read.
at 6:40:00 pm