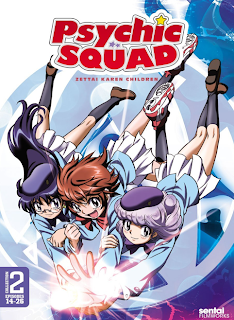 I decided to watch the second Zettai Karen Children collection (retitled to Psychic Squad in the US) and ended up marathoning the entire set over the course of a weekend. This July 2012 release collects episodes 14 to 26 in a double-disc DVD collection for $49.98, though it can usually be found much more cheaply online. Extras are sponsor bumpers, creditless opening/ending videos and trailers for other Sentai Filmworks titles. The episodes here feature a brand new ending sequence. As before, the show is presented in the original Japanese with English subtitles; no American dub has been produced for Zettai Karen Children to date.

It's been a while since my review of the first collection. I mentioned the similarities to classic American titles like the X-Men before, and they're still present here. One of the most addictive aspects of Zettai Karen Children is that it recaptures the exact same excitement I felt reading those classic comics back in my early teens, without relying on the newer trends which have ended up ruining the big superhero stories for me. It's also much more consistent thanks to having just one creator instead of the rotating stable of writers and artists that the western comic industry uses on their mainstream titles. I've been waiting for a series like this for a long time.

With the introduction to the main cast more or less out of the way, this batch of episodes introduces a varied bunch of new characters. The majority of these form part of Hyoubu Kyousuke's organisation made up of renegade espers, P.A.N.D.R.A.

Fans of The Unlimited will be pleased to see some familiar faces as well as extra backstory for the characters who have already been introduced. One thing that the new espers seem to have in common is a more varied set of powers than those we'd seen previously. Magi's ability to use his hair as both wings and a weapon is awesome, as are the animal-inspired shapeshifting powers wielded by Inugami.

There has been an marked increase in the amount of 'equal opportunity' fan service since the series began. Along with the usual short skirts and skimpy tops sported by the female characters, the male leads get plenty of time to show off their flesh whenever possible too. This is sometimes done in parody - for example, any time the macho Muscle Ookama is on screen - but more often it seems to be aimed straight at the series' mixed audience. I'm not complaining, especially when Hyoubu is such a fantastic character.

Thankfully, actual fan service is reserved for the older characters in this series and the titular Children stick to teasing the adults in a completely harmless way. Minamoto wouldn't let anyone take advantage of the three girls while they're under his protection, after all.

Themes of child abuse, animal cruelty, prejudice, bullying, oppression, abandonment and loss of innocence crop up surprisingly frequently in this colourful show. One episode touches on the dilemma of a pair of Normal parents who discover they're expecting an esper child - reflecting the insecurities of the Children themselves after their difficult upbringings. Another arc has Minamoto meeting a semi-feral esper girl who hasn't been so lucky in life as the girls he protects. That's not to say that the Zettai Karen Children anime can't be enjoyed as a straightforward battle-of-the-week cartoon; the depth is there, but it's never forced on the viewer. I understand that the original manga is less fluffy in this regard.

In the end, the series is a solid blend of everything that I used to love about cartoons as a kid with a more adult undercurrent to keep me watching now: a sense of danger during big fights, a huge cast of likable characters, political machinations, plenty of fan service and a complex overarching story.

I'd like to see 'Psychic Squad' receive a Blu-ray release in the west one day. Its visuals don't really merit a high quality transfer under normal circumstances, however, the picture quality isn't great here and I'm so used to watching Blu-rays now that the imperfections bother me. Still, with no translated release for the manga and the amazing THE UNLIMITED -Hyoubu Kyousuke- spin-off still unlicensed, I fear that a large enough western audience for a premium rerelease might not exist. A shame. Sentai's DVD sets are decent aside from the video quality, with an accurate subtitle script.

I'm enjoying the show more than ever now that the main players from the P.A.N.D.R.A. organisation have assembled. It won't be long before I start on the third DVD collection!
at 12:49:00 am