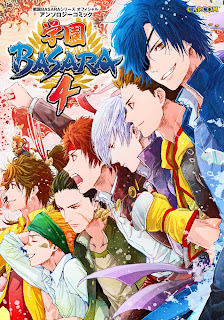 Gakuen Basara 4 was released on 8th November 2012. By this time the creators had given up on trying to theme it around any specific game so it's listed as simply covering the 'Sengoku Basara Series'. It's 164 pages again, with colour illustrations by Yukihiro Utako and Kyuugou and a beautiful wraparound cover by Nari.

Although there's no new game for the artists to draw from, the stories still manage to introduce some new characters to the roster in the form of the five regional warlords from Sengoku Basara 3, eternal optimist Naoe Kanetsugu and all three members of the Miyoshi Sanninshuu. Since these are all minor characters in the original games, their school outfits have been heavily customised to keep them recognisable - far more so than the costumes of the leads.

The colour art mostly focuses on the new characters, allowing for a very rare opportunity to see the non-playable characters drawn in an officially-sanctioned Capcom release. Mikami's rough sketches of the new characters' designs are included too, along with another set of comedic 'school reports' for some of the cast.

Here are some very brief summaries of the individual stories. Some of the titles contain puns relating to other series which I've tried to preserve when possible.

Sensational Beat Maniax
Toriumi Mihoko
A typically rowdy introductory chapter to kick things off. Nobunaga and his followers are back from the outset this time. There's no real plot in this story; it's simply an excuse to introduce all of the new characters and set up their relationships with the existing characters.

Ano Hito Tazunete Sanzenri (3,000 Leagues In Search Of That Person)
Danbo
Hanbee and Hideyoshi make a rare appearance at the school. Mitsunari should be delighted - except that nothing seems to go his way and he keeps missing them. He becomes so desperate that he ends up taking advice (of a sort) from Tsuruhime. Will it help?

Kimi Ni Todoke, Massugu Na Kimochi (I Give You My 'Direct' Feelings)
Sanorin
Keiji unwittingly makes an enemy of Motonari, a dangerous mistake indeed. Motonari enlists the help of newcomer Satake Yoshishige to help carry out his plan for revenge. Yoshishige isn't the most interesting guy even amongst the Sengoku Basara 3 non-playable characters, however, artist Sanorin does a pretty good job of making his rigidly loyal personality endearing, with pained facial expressions as he's forced to continuously question whether he's doing the right thing.

Ore No Boss Ga Ichiban! (My Boss Is Number One!)
Rokuji
Kojuurou is stuck on cleaning duty thanks to Masamune. To make matters worse, Kanetsugu and Ranmaru are there too. The three of them end up squabbling about the three men they serve and adore, even going as far as imitating their respective masters with any props they can find.

Shiawase Fuufu Keikaku (The Happy Couple Plan)
Maki
Oichi approaches Nouhime for cooking advice, planning to spoil Nagamasa a little. Nouhime isn't the best mentor and the pair end up touring the school to see how the other Gakuen Basara ladies charm the men in their lives.

Souran Kimodameshi Party (Mayhem: Test Of Courage Party)
Arai Karo
Sasuke, Masamune and Kingo are teamed up together to participate in a 'test of courage'. They're not entirely happy with the arrangement, and it's not long before things go horribly wrong thanks to the people they meet on their journey.

Shiroki Tora Kenzan! Muchuu No Tora Taiketsu (Meet The White Tiger! A Tiger Showdown In The Fog)
Minami Seira
Yukimura gets fired up after hearing about the existence of another tiger at the school - Hirotsuna's pet cat, Tora (who is naturally a white tabby, or toraneko). He challenges the cat to a contest to decide which of them is most worthy of the 'tiger' name. I thought this chapter was particularly funny because the mangaka had managed to squeeze in references to just about every aspect of Hirotsuna's brief in-game appearance.

Everyday, Naze Ja (Everyday 'Why?!')
Mikami
Kanbee moans about his bad luck with Ujimasa, before Ieyasu takes him on a cheerful trip to the school playing fields in search of the key to his chains. They come across several other students on the way; some of them help, while others hinder the hunt.

FRIENDSHIP
ENU
Masamune's confidence comes crashing down when Motochika points out that he's both unpopular and bad at making friends. After some soul searching, he discovers a true friend in a surprising place (maybe).

Fuuma To Houjou No Houkago Teatime (Fuuma And Houjou's After School Teatime)
Yanagi Batoshirou
Kotarou and Ujimasa are enjoying a relaxing one-sided conversation over tea in the library, but they keep being interrupted by the rowdy antics of other Gakuen Basara regulars. In the end Kotarou heads out alone to deal with the problem, coming face to face with the Miyoshi Sanninshuu.

Gakuen Basara 4 is one of my favourite volumes in the series, not least because it's fun to see the usual characters dealing with the silly regional warlords who show up so infrequently. The quality of the artwork and storytelling has come a long way since the first volume too; every one of the artists has drawn for the Gakuen Basara series already so their storytelling styles are familiar. It's good to see previous contributor Kyuugou returning to the fold with a colour illustration, too!
at 9:54:00 pm