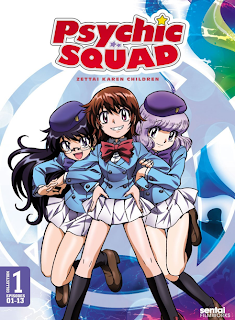 I'd already purchased the whole of Zettai Karen Children on DVD prior to the 2013 television series THE UNLIMITED -Hyoubu Kyousuke- being picked up for broadcast to the UK through Crunchyroll. It was initially doomed to fall into my backlog of unwatched discs for years to come. This was until I become so addicted to its spin-off that I became desperate to see the original series as soon as possible.

Zettai Karen Children has been given the generic-sounding title Psychic Squad for its US release, guaranteeing that it will be overlooked by potential fans for years to come as few of the people enjoying THE UNLIMITED are going to realise the original series is already available to own. The US release splits the complete series into four double-disc DVD sets.

Due to the bland title, I almost forgot to buy the series myself. Psychic Squad collection 1 came out in on 1st May 2012 and sells for $49.98, which ends up being just over $30 when online discounts are taken into account. The set is barebones with no English dub; it contains the first thirteen episodes in Japanese with English subtitles split across two discs. There are minimal extras; just sponsor bumpers, a clean OP/ED and some trailers. Sadly, there's no Blu-ray version available and the DVD video quality is nothing to write home about. Still, I'm very glad that US licensor Sentai Filmworks released the entire show with such good timing.

Zettai Karen Children has a simple premise: in the near future, a growing number of people are being born with ESP powers such as telekinesis, teleportation and telepathy. Normal people feel threatened by these mutants espers which results in an uneasy culture of persecution on both sides. In spite of this, some espers work for the good of mankind thanks to a 'Minority Report'-style organisation which uses psychics to predict catastrophes and stop them before people can be hurt. The titular 'Children' are a trio of young female espers with unusually strong powers. They work together to help people and make the world a better place along with their idealistic young guardian, Minamoto Kouichi.

It's a lot like the X-Men, except that the cast is much smaller and there are lewd jokes every few minutes. And there really are a lot of smutty jokes, for a series which is so family friendly in every other respect.

The girls are fun to watch (my favourite is Nogami Aoi, the dark-haired teleportation expert). While Minamoto himself is a little too good-natured and naive for my tastes, he's shown to have quick wits when not being teased by the girls or the team's enemies. It takes several episodes before the protagonist of THE UNLIMITED, Hyoubu Kyousuke, finally appears in front of the main characters. Kyousuke is the main reason for my interest in the series at all, but I can safely say that it's enjoyable even without his relentless bullying. 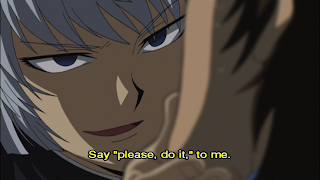 It does, however, get considerably better once he's around to act as a foil to Minamoto's innocent personality. As fans of THE UNLIMITED will already know, Kyousuke is an older esper who hates 'Normal' human beings with a passion. What makes him a little different from most villains is that he's extremely relaxed about his evil scheming and will quite happily pop in and help the main characters out when it suits him. This is partly because he is interested in protecting one of the three Children for his own reasons, and partly because he is a natural-born troll, through and through. 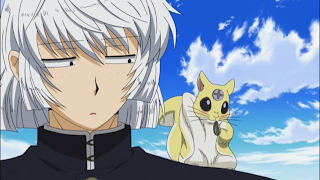 Most reports seem to advise reading Shiina Takashi's original manga instead of trying the television version due to some unpopular decisions with the adaptation. I don't have access to the manga and instead came from THE UNLIMITED, so my perspective may be a little unusual. The dark, urgent atmosphere of the newer spin-off is completely absent in this story, but that's not a bad thing, especially watching them both side by side the way I've ended up doing. It's fascinating being able to see Kyousuke (and the Children) from different viewpoints.

In summary, Sentai's DVD collection was definitely a worthwhile purchase. I'm hoping that THE UNLIMITED will eventually receive a Blu-ray release in the west and gain enough of a following that the original manga makes its way over here one day.
at 9:38:00 pm