A tremendously exciting set of deliveries came in today, made up of brand new DVDs and back issues of various Japanese magazines. 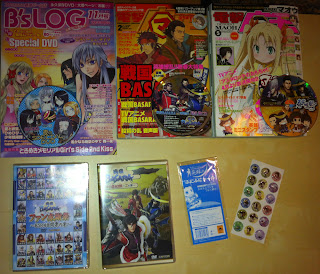 In the top left is the November 2006 issue of B's Log magazine. This volume was significant for its coverage of Basara Matsuri 2006 ~Natsu No Jin~ and it even included some video footage on DVD. I decided that it was a DVD I ought to own. B's Log is a good magazine to begin with so I'll have fun reading it from cover to cover later on.

The February 2010 issue of Dengeki Maoh comes next with beautiful cover art from Sasakura Kou, who coincidentally has exactly the same style of drawing as well-known BL manga artist Yamada Sakurako. Her anime-based Sengoku Basara manga was running in the magazine at the time. There's a huge sheet of SenBasa stickers inside and more importantly, an exclusive 'Chouranbu' CD featuring Masamune, Kojuurou and Hideyoshi reading fan postcards and speaking famous lines from the games.

Completing the top row is the May 2011 issue of Dengeki Maoh. Dengeki Maoh is the publication which serialises most of the SenBasa manga, and at the time it was running Mini Sengoku Basara Two. This particular issue included a special Sengoku Basara 'Shunrai Meidou' CD with audio content from Masamune, Mitsunari and Ieyasu. I only bought the magazine for the CD so the fact that 'mini stamps' of Masamune, Yukimura, Motonari and Motochika were also included was a bonus. As for the magazine itself, among other things there are several colour pages devoted to news about Sengoku Basara -The Last Party-, with a rare picture of Kanbee's anime design which was created before he was axed from the movie entirely.

In the bottom left of the photograph is the fanclub-exclusive Sengoku Basara Fan Kanshasai ~BSR48 Kaihyou No Utage~ event DVD, and beside it is the Basara Matsuri 2012 ~Natsu No Jin~ DVD set. I'll talk about those in detail in separate posts soon. Finally, there are two packs of 'puni puni' seals; hard plastic stickers ideal for attaching to mobile phones. They're decorated with Mame Sengoku Basara characters and exclusive to fan club members. Since I was ordering from the fan club shop anyway it seemed a shame not to buy some of the stickers too.
at 7:34:00 pm