This week has been far too action-packed for my liking, thanks to the pre-Christmas rush in my line of work! I've been fighting the stress with some retail therapy of my own, so I should have some nice things arriving in the next few weeks. This week I received some of my outstanding December anime preorders in the post, so here's an overexposed photo. 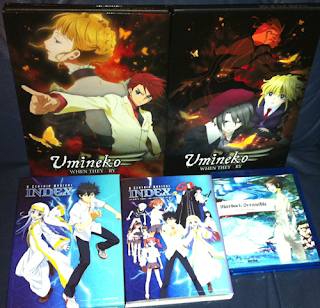 The big boxes are the Blu-ray sets for both parts of Umineko: When They Cry (Umineko No Naku Koro Ni) from NIS America. They're the usual premium releases with hardback guidebooks inside the large boxes. Strangely, although there are two sets there are only three Blu-ray discs in total, so one set only contains a single disc and a piece of foam to fill the space in the oversized box. It's better than them not matching, I guess.

Also in the picture is the US Blu-ray of Mardock Scramble: The Second Combustion which is coming to the UK very soon as well. I liked the first film so the second was an automatic purchase.

The final two packages are the two parts of A Certain Magical Index (Toaru Majutsu No Index) from FUNimation. I'm a little disappointed by this release; the LE box is nice and the second part has a cardboard slipcase, but it's DVD-only and there's not much variety in the artwork used on the packaging at all (the reverse of the LE box uses one of the images on the cover of the second part). I can tell that there will be a Blu-ray set later on and I'll feel cheated, so I'm going to wait and buy the later parts on Blu-ray to begin with instead of going along with this staggered release strategy. I do want to see Index, though, so it's not all bad.

Given the time of year, there may be some more posts of this nature very soon. If I'm lucky, I'll be able to take the next few pictures when there's daylight for a change!
at 7:00:00 pm