Owing to the New Years holiday period, most simulcasts are temporarily off the air and interesting Sengoku Basara news has slowed to a trickle - unless you follow doujinshi, as the hype for Winter Comiket this weekend is in full swing. I still have plenty of older news to catch up on, but two very tiny fragments of news drifted out of Japan in the last day that I should report on first.

The first is an announcement that the Butai Sengoku Basara 3 Utage website will finally launch on 1st January 2013. The hype will soon begin for the show's April debut!

The second announcement is that another round of merchandise will be available on 21st March 2013: Sengoku Basara Omamori Mascots. They're traditional amulets with a SenBasa twist, and they'll be selling for ¥600 each. Nine different characters will be available.

Click the picture to see them all up close! 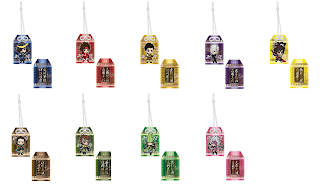