Today was the beginning of the Christmas period for my family, to accommodate various trips and occasions. I got to open some presents early! 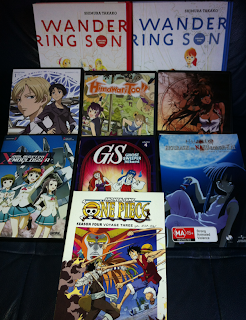 On the manga side of things, I received Wandering Son (Hourou Musuko) books two and three. The huge Fantagraphics hardback editions look awesome and take up a lot of space. The second part of Siren Visual's release of Higurashi No Naku Koro Ni Kai accompanies a pile of Sentai Filmworks titles from the US: volumes of Cluster Edge, Himawari Too!!, The Book of Bantorra, Ghost Sweeper Mikami and Idolm@ster Xenoglossia.

Though it has nothing to do with Christmas, One Piece season four volume three arrived in the post as well. It will have to keep us going for a while as the next set of episodes hasn't been scheduled for release until mid-March.
at 5:16:00 pm