Dengeki Maoh has finally announced the first real news about Sengoku Basara Magazine in the form of an open request for fan contributions for the seiyuu to respond to on a bundled audio CD. There's also a little information about the magazine itself; it will be a deluxe publication which will be released quarterly starting in spring 2013. The news post states that it will include the latest news relating to the Sengoku Basara series as well as artwork, comics, a CD and gifts such as rubber straps. In other words, there should be something for everyone.

The first volume will have Date Masamune on the cover and its main highlight will be the bonus CD featuring the seiyuu Nakai Kazuya (Date Masamune) and Morikawa Toshiyuki (Katakura Kojuurou). The guests will discuss various topics relating to Sengoku Basara in the style of a radio talk show. The information about the first issue's bonus CD is quite detailed since they want fans to be able to write in for each segment (I've translated it very loosely below with some of my own comments).

1. Tell Nakai-san and Morikawa-san!
For this segments contributors are encouraged to enthusiastically say whatever they want to the two seiyuu. There should be some interesting submissions given how popular the two guests are.

2. Share your worries with Nakai-san and Morikawa-san.
Perhaps Masamune and Kojuurou can help fans solve various problems they're struggling with? I think that Kojuurou's advice might be better for most problems than Masamune's confrontational approach...

3. I want Masamune and Kojuurou to say it: 'a new Sengoku Basara voice'.
Tell Masamune or Kojuurou what you'd like them to say. Perhaps it could be a funny line or a 'chaku voice' (spoken ringtone), or send in some words of encouragement for them to say to you. Submit as many as you like!

4. My Basara love!
Please express how much you love Sengoku Basara! It doesn't have to be in words alone; it's ok to use pictures.

5. Using it at a time like this! Masamune and Kojuurou's 'Basara Words of Wisdom'.
This segment is going to be about how you can fit famous lines from Sengoku Basara into situations from day-to-day life. It sounds hilarious.

If you can write in Japanese and want to send a message of your own, the contact information is at the link and the deadline is 24th December (postcards) or 25th December (email). The required information is a pen name, age, address and contact number, and of course your message itself. The subject line 'Sengoku Basara Toukou No Ran' must be used. 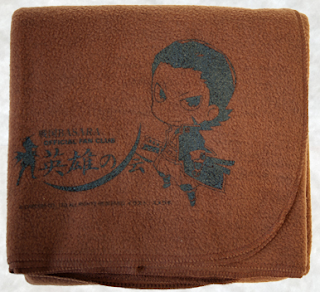 Althought it's unrelated to Sengoku Basara Magazine, the Sengoku Basara official fan club's first ever 'fan meeting' took place yesterday in Osaka for 40 lucky guests. As well getting the chance to meet KobaP and Yoshida Tomokazu in person, fans who attended were given the opportunity to obtain a special Kojuurou blanket which is also going to be available at the official fan club shop. I think I want one.
at 2:28:00 pm