It's that time again! Fans in Japan are starting to receive their copies of Weekly Famitsu magazine and that means more Sengoku Basara 4 Sumeragi news for everyone else. Like before, we can expect the official website to update in a few hours to add the information revealed in the magazine.

Once again, I'm keeping the numbering system listed in the magazine to make it easier for people to navigate the website once it updates.

The article opens by describing Rikyuu's moves with pictures. To help those who find it hard to remember which is which, Wabisuke is the gentle personality and Sabisuke is the more aggressive one.

With Kuchikiri ('First Tea'), Sabisuke spreads his arms as though he's dancing and rushes the enemies holding fans in both hands. It can either be used to start a chain or to follow on from another move.

Ooyose ('Great Gathering') draws the enemies in front of Wabisuke together then lets him lock on to the group of them. He can either control the clump of soldiers for a set time or hit them with a follow-up attack.

Chachakuru ('Spinning Disruption') is another Sabisuke move described as a unique attack where he performs a wild dance as fans appear around him. It isn't pictured in the article.

(Raindrops' note: The name of this move is actually a multi-layered pun which was clearly chosen because 'cha' means tea. I'm not smart enough to come up with a better English equivalent.)

Rikyuu's first special (R2) move is called Sen Sensu ('A Thousand Fans'), an obvious reference to his name. A vast number of folding fans come flying out from his sleeve in a straight line to attack the enemy. The player can control the direction of the blast.

His second special is Nodate ('Outdoor Tea Ceremony'), the tea party move that we've seen in plenty of screenshots before. The enemy takes damage according to the number of times Rikyuu swirls the tool around his tea cup. His own health also regenerates during the ceremony.

The third special move is Kaiseki ('Tea Ceremony Repast'). Rikyuu uses his psychic power to scrape huge rocks out of the ground around him. These automatically attack the enemies in front of Rikyuu then blast them away.

The screenshots tease a scene where Sabisuke is being impaled by Hisahide's sword as flames rise around the two men.

Gaming journalist 'Giant Kuroda' added a few comments about Rikyuu. The moves which control enemy soldiers give his gameplay a very fresh feel but the best part is the way he flies around in the air relaxedly courtesy of his 'mysterious powers'. Using Kuchikiri or Chachakuru after taking control of the enemies with Ooyose makes it easy to pull off tricky combo attacks.

20. The game's ending theme will be performed by Ishikawa Chiaki.

This was already rumoured thanks to the fans who have seen the most recent promotional video (which is still an event-exclusive at the moment). Ishikawa has already performed songs for Sengoku Basara 3, the anime adaptations and the stage play series, so it's good to see her returning for Sengoku Basara 4 Sumeragi. The game's ending theme will be titled Heavenly Blue.

21. The player can transform into a bomb soldier or the Akatsukimaru in Battle Roulette.

We already knew this...

Anyway, the article goes into more detail about both of the 'newly-announced' transformations this time. They're numbered so it looks as though future articles will include descriptions of additional transformations later on.

The bomb soldier is exactly as he looks, one of the generic bomb-carrying enemies. He has a few special moves ready now that he's semi-playable, the first of which is the ability to use different kinds of bomb. The examples listed in the article are red bombs which cause pillars of flames to flare up while golden bombs produce enormous explosions. The soldier can also place bombs on the ground and turn the battlefield into a sea of fire through chained explosions.

The Akatsukimaru is Motochika's gigantic mechanical weapon which was called the Rising Sun in the English version of the game. It can fire a laser from its mouth to blast enemies in front and use a stomping attack.

According to another comment from 'Giant Kuroda', he's tried the new Battle Roulette out and finds it absolutely hilarious.

Next comes the usual batch of screenshots showing off the new medal rewards.

12 of 167: A black and red biker-style costume for Shima Sakon called the Rider Suit Ver.
13 of 167: A new military-style green, black and red outfit for Takenaka Hanbee called the Commanding Officer Ver.
14 of 167: A new costume with Sarutobi Sasuke wearing his so-called mysterious friend's mask from the Takeda Dojo story: Tenko Kamen Ver.
15 of 167: A skill enhancement for Yamanaka Shikanosuke. The picture shows Oyassan kicking him into the distance and the description says it's a rush move which sweeps up the soldiers in Shikanosuke's path and opens them up for an aerial combo if you get the timing right.

I think I can guess what Kojuurou's Tenka Medal costume is going to be!

23. The 'War Buddy' system from Sengoku Basara 4 has been improved

KobaP already announced this elsewhere but the article formally confirms that you can now tag right from the start; there's no need to level characters up first.

24. The third batch of collaboration DLC is revealed.

As promised, the magazine revealed the third of the six major tie-ins as well as giving the first confirmations of the final three. The third collaboration DLC will be a crossover with the New Japan Pro-Wrestling group which I'm pretty sure nobody could have predicted, while the final three have been confirmed as Biohazard (Resident Evil), Street Fighter IV and Monster Hunter.

Going back to the wrestling, there's a two-page spread showing the new costumes in action. The characters who will receive wrestling-themed DLC costumes are Hideyoshi, Yukimura, Sakon and Nagamasa and each costume is based on a different famous wrestler.
(Raindrops' note: I'm abbreviating New Japan Pro-Wrestling to NJPW for the costume names to stop them being too long.)

I don't know much about professional wrestling myself so this is rather surreal. Sakon and Hideyoshi look amazing while the other two are still growing on me. Several commenters on Japanese forums have been asking why Kanbee was left out of the wrestling collaboration.

It seems that series director YamamotoD will be appearing in an article on the Famitsu website very soon in a chat with wrestler Nakamura Shinsuke to discuss the costumes they chose and what led to this collaboration. I look forward to reading it later.

Miscellaneous observations from the footnotes and other parts of the magazine:
--

While I'm sure I'll be posting another news roundup on Friday when the game's preorder listings are available, here's an update I forgot to include last time.

The special exhibition which has been running since January in Okazaki will now be open until 10th May 2015 (it was originally scheduled to close at the end of April). They've added a bonus too; fans who visit in the final 30 days of the exhibition will be able to use a special sticker machine which prints pictures with Sengoku Basara 4 frames. 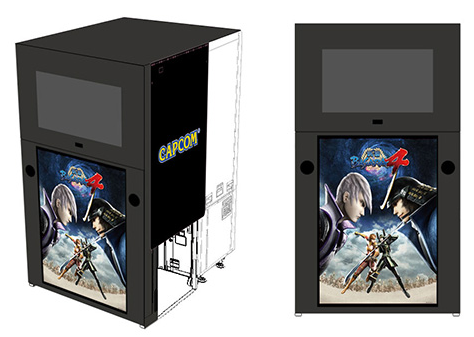 Samples of the frames were also provided. 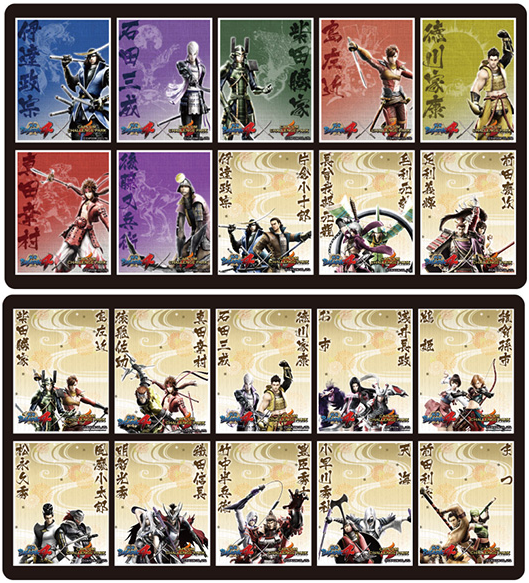