The latest Sengoku Basara 4 Sumeragi coverage from this week's magazines 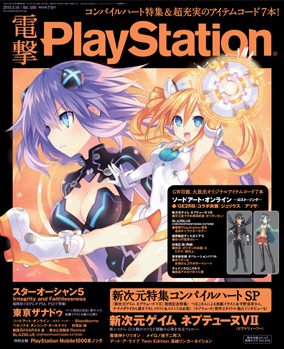 We had news from Weekly Famitsu last Thursday so this week it's Dengeki PlayStation's turn for the latest Sengoku Basara 4 Sumeragi updates. Despite it being featured in a special PlayStation 4 feature article there isn't much new content this time.

Please experience Sengoku Basara's take on 'The Way Of Tea'."

There were also some gameplay comments from someone who tried all three new characters, which I've summarised.
Sakon's new 'Rider Suit' costume has a skull and dice emblem embroidered on the back. This was mentioned in the last update on the official website but I missed it at the time.

I also bought Weekly Famitsu this week even though it was obvious that it wouldn't have much information so I was pleased to see a flashy two-page advert for the game right after the contents page. They're going all-out to promote it after the weeks of silence! The marketing campaign is pushing the silliness of the series by introducing the three new characters thusly: "A gambler... yet he's the strongest!! A tea master... but with psychic powers!? A beauty... but a super-sadist!?".

A press release went out earlier today to preview some of the things we're going to be shown on Saturday during the presentations at the Nico Nico Choukaigi 2015 entertainment event. Here are the important new details:
There's a picture of Ashikaga Yoshiteru brushing off an attack from Mitsunari in the article linked above.

If you want to watch the live video streams from the event, I recommend checking my previous posts for the schedule and streaming links for the Sengoku Basara 4 Sumeragi VS DMC4 SE and Capcom TV! Nico Nico Choukaigi 2015 Special Show channels.

(Raindrops' note: I'll be watching the streams but since they don't begin until 1:00 in the morning in my time zone, I might be too tired to provide much useful commentary on Twitter.)

The clip isn't very long (it starts at 1:33) but it's totally worth it for the "Let's Sengoku Tea Time!" comment from the announcer.


More on next month's Machi★Asobi event in Tokushima

The full event details have now been published for Machi★Asobi, a three-day entertainment event which commences on 3rd May 2015. There will be a playable demo of Sengoku Basara 4 Sumeragi for attendees to enjoy and, as with the in-store demonstrations they have planned, customers who play it will be presented with a commemorative folding fan. Furthermore, game producers KobaP (Sengoku Basara, Devil May Cry 4 SE) and KojimaP (Dai Gyakuten Saiban) will be hosting joint stage presentations at 17:30 on 3rd May 2015 and 17:00 on 4th May 2015 to talk about the new titles.

In addition, an e-Capcom pop-up store will be selling special merchandise at the event. Some of this is completely exclusive to Machi★Asobi.

A commemorative tote bag for ¥1,600 featuring all three games being promoted at the event: 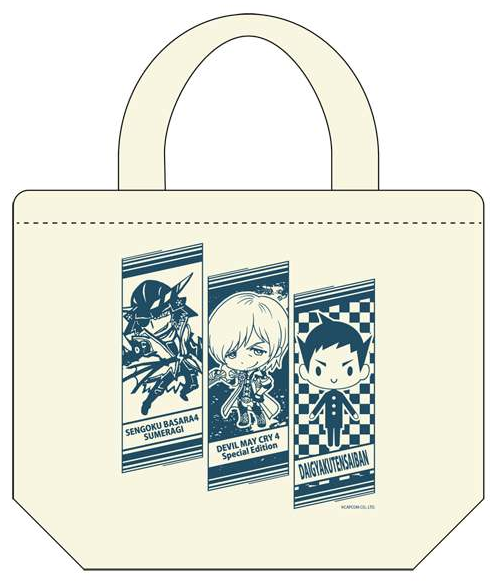 A clear A4 file showcasing all three games for ¥500: 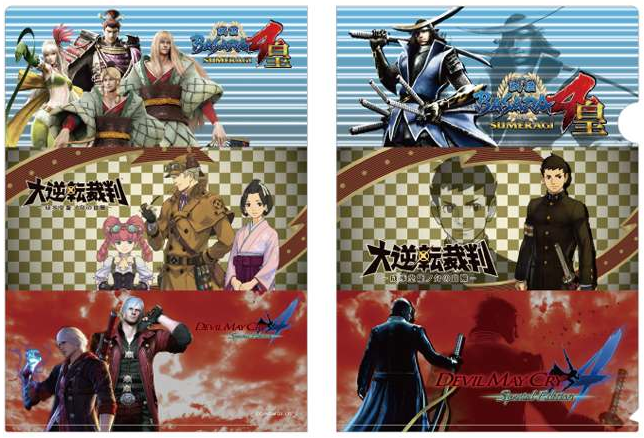 Four different tinned teas for ¥1,200 each (there's a choice of green tea or black tea): 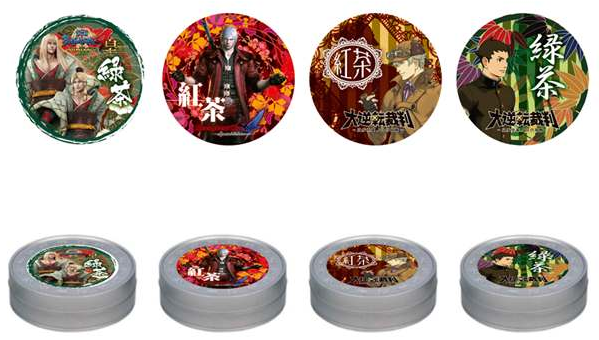 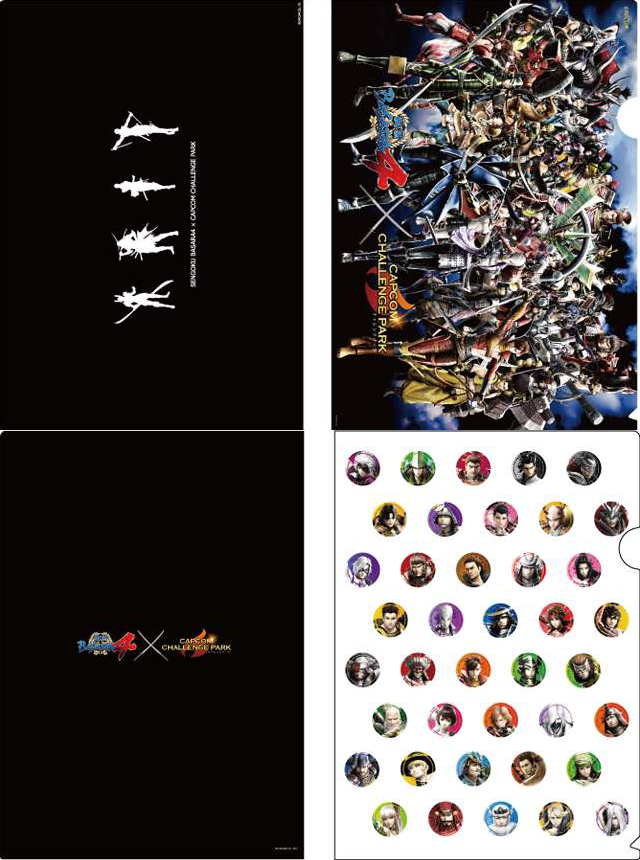 A new selection of Capcom Challenge Park 25mm souvenir badge straps. These will be available randomly-packed in capsule machines; it will cost ¥100 each time you use the machines:

The CafeReo website has added a preview of some new Sengoku Basara 4 Sumeragi merchandise scheduled for late June 2015. These items should appear for purchase online very soon.

The first new item is a set of oversized Sengoku Basara 4 Sumeragi badges available in four designs named 40 Warriors, Date & Ashikaga, Sen No Rikyuu and Sumeragi. The badges will cost ¥500 each: 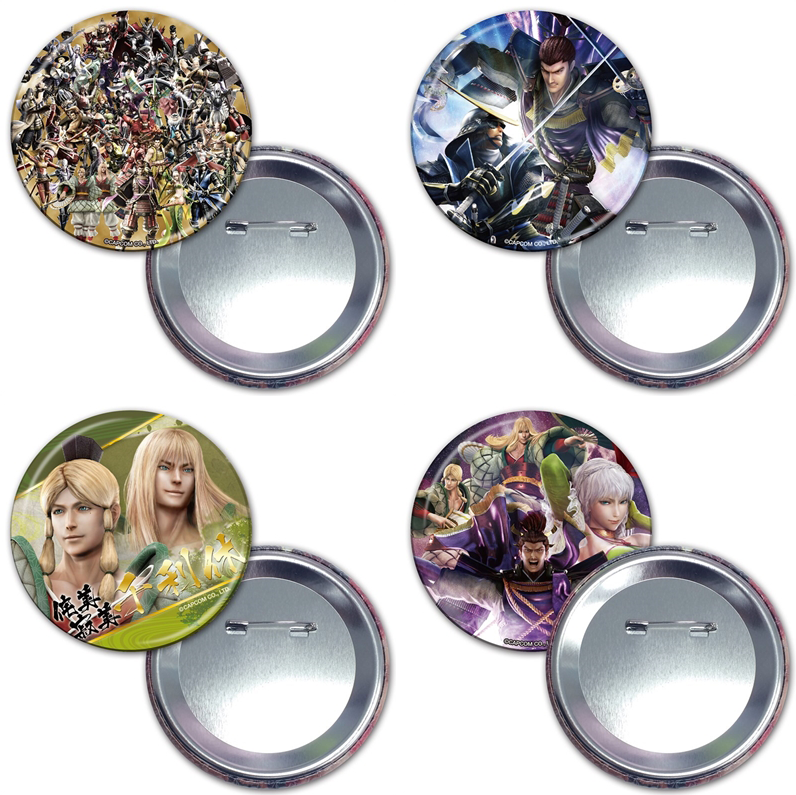 Alternatively, you can choose from four Sengoku Basara 4 Sumeragi clear files with similar designs. They will cost ¥350 each: 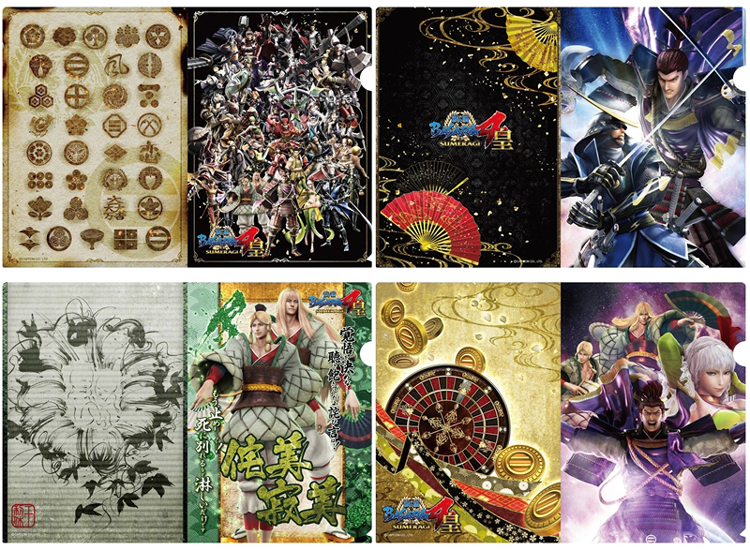 A lot of people (both inside and outside Japan) are getting worried about not receiving their Sumeragi ID codes for the 'early reservation' exclusive weapon DLC. From what I've seen, e-Capcom has been sending the codes directly to customers in batches so if your proxy service is ordering from them please ask them to check their email.

Third party distributors such as Amazon Japan and HMV have yet to send out a single code. Fellow fan @Dokuganryu2000 contacted Amazon directly and was assured that they were on the way, and I've seen similar stories from Japanese customers too. Hopefully those who have preordered will finally receive their Sumeragi ID emails any time now.

Update: A Japanese fan has reported that Amazon is planning to send out the codes 'no later than the 29th May'. I hope that's just for the final batch. Meanwhile, e-Capcom is sending them out in batches every Tuesday so if you've ordered through a third party, remember that you might need to wait a few days before they'll be able to forward you the code.

In the meantime, there's some good news for importers as a few more options have appeared for places to preorder Sengoku Basara 4 Sumeragi with the early reservation weapon DLC. As these companies are all placing their orders according to demand, please preorder in plenty of time to ensure you receive the code.

NCSX is a long-established US-based import specialist and they've confirmed that they will be sending customers the Sumeragi ID codes they need to qualify for the weapon DLC. They're offering the standard edition for PS3 and PS4. They're also selling the e-Capcom exclusive towel bundles for PS4 (limited edition and complete edition) and they responded very quickly to my message.

Nin-Nin Game is a company I've never personally used and I'm wary that their listings have been translated automatically, however other fans report that they're reliable. They're offering the e-Capcom exclusive towel bundles too and it's worth checking them out. Just be careful to ask them to send you the Sumeragi ID as they don't specifically mention it in the listings even though it's shown in the picture they're using for the e-Capcom bundles. HokutoNoBen has kindly sent them a message to try to find out more details.

Nippon Yasan is listing the PS4 versions of the game (standard edition and 21 costume hobby box). I asked them how to obtain the Sumeragi ID and they advised that after paying for the order, each customer should contact them with their order number to request the code. They expect to receive the codes on 25th May but it might be a good idea to send your message a few days before that to make sure the code is coming, then you simply need to register it on Capcom's site before 7th June.
at 5:56:00 pm