e-Capcom will be releasing special bundles they've calling the Sengoku Basara 4 Sumeragi Limited Edition and Complete Edition, which include the game and an 'approximately life-sized' 60cm x 180cm microfiber bath towel of the buyer's favourite character.

There will be 41 different designs for the bath towel, each patterned after a different character from the series - that's almost every character playable in Sengoku Basara 4 Sumeragi with separate designs for Wabisuke and Sabisuke along with Akechi Mitsuhide and Tenkai. The only character missing is Tadakatsu (more on him later). 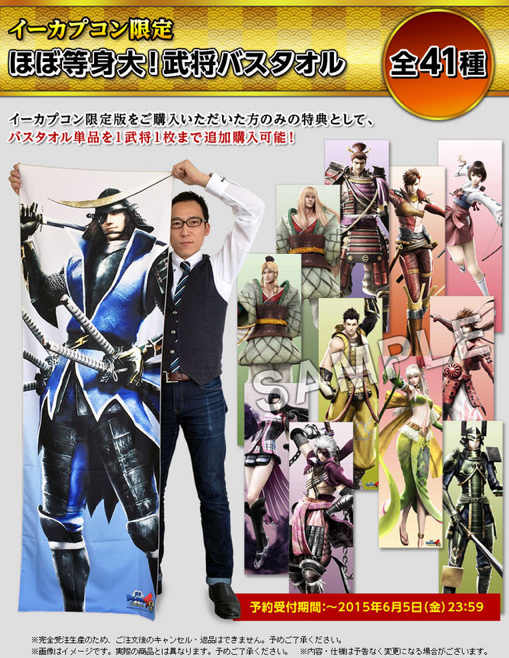 Those who preorder one of the bundles also earn the right to purchase up to 40 additional towels for ¥7,222 each before tax. Purchasing duplicates of the same towel isn't allowed, so those who dream of owning 41 matching Oichi towels will have to purchase the game multiple times instead (this is presumably to discourage people from buying to resell).

As for the other bonuses, all five previously-announced early reservation preorder weapons will be included if you order by the deadline along with the Welcome To The Wabi-Sabi Tea Party wallpaper. Here's a summary of each of the four versions e-Capcom is offering:

If you don't want the 21 DLC costume codes from the 21 Costume Hobby Box version, you can order the standard version instead and still receive the bonuses:

To sweeten the deal further, one lucky buyer will be randomly selected to receive a 300cm x 300cm 'extraordinary Honda Tadakatsu towel' as a bonus prize. 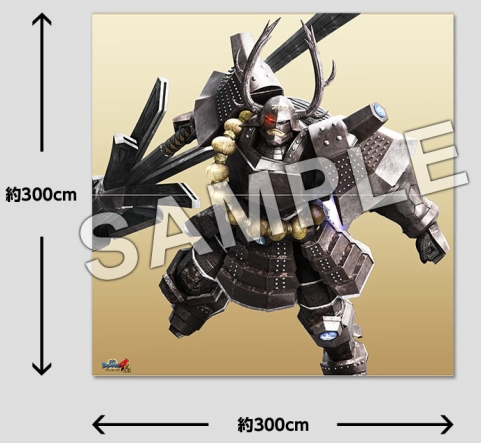 The special bundles will be made to order so if you want any of those towels, you will have to place a preorder. The early preorder period for the bonus weapons and wallpaper ends on 24th May and after that the bundle listings will only remain available until 5th June 2015 at 23:59 Japan time.

e-Capcom will also be selling the game without the towel, so make sure the listing you choose says it's the 'Limited' or 'Complete' edition before buying. I'll add the direct links on Friday.

Note: e-Capcom does not ship outside Japan, however it's possible to order from them using a proxy or forwarding service.

Since the preorder period commences on Friday this week, those of us in western countries can probably expect to see listings appearing elsewhere on Thursday evening. It's possible that other specialist stores will be offering their own exclusive Sengoku Basara merchandise as a preorder incentive too.

The latest preview of Thursday's issue of Weekly Famitsu has also gone online today and once again Sengoku Basara 4 Sumeragi is going to be highlighted in a 6-page feature. The article will include information about Sen No Rikyuu's gameplay, the Battle Roulette system and the remaining major tie-in DLC costumes.
at 10:29:00 am