I'm making a special post for the importers out there who are anxious about how difficult it seems to be to guarantee that they'll receive the five special weapons which aren't planned for release on PSN later. If you preorder before 24th May 2015 you'll be able to qualify for all five weapons - but only if you order from specific stores, and very few of them are supporting people who live outside Japan. 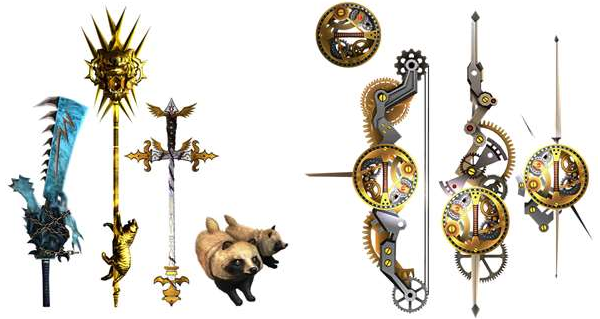 Up-to-date direct links to all of the listings are provided here if you need help finding the right one.

Shops which promise to provide the weapons

Amazon Japan
Amazon Japan is easy to use and the checkout can be switched to English, making it a good choice for importers who want to buy directly from a Japanese store. The catch is that they won't ship games outside Japan, so you'll have to sign up with a forwarding company and pay some extra shipping to actually receive your copy of the game. Still, I think it's a better option than using a proxy service if all you want is the DLC codes and the game; they'll send you the Sumeragi ID directly by email so you don't have to worry about a proxy company losing your code.

e-Capcom
You will definitely need to use a proxy service for this as e-Capcom doesn't accept foreign credit cards. However, you can also use e-Capcom to obtain the special bath towel bundles! Just make sure your proxy company understands they have to forward you the Sumeragi ID code when e-Capcom has processed the reservation.

HMV Japan
HMV Japan is promising to provide the preorder DLC on the Japanese pages for the game (standard PS3, standard PS4, hobby box PS3, hobby box PS4) but if you visit the English pages the DLC code information is missing. However, they offer international shipping via EMS and accept foreign credit cards! I've placed an order with HMV in Japanese as a test so I'll report back if they send me the code, since that would make HMV the best solution for many people outside Japan. Their EMS shipping to the UK is ¥1,900 if you want to compare that with the cost of using Amazon and a forwarding company.

Rakuten
A number of sellers on the Japanese version of Rakuten's marketplace are listing the game with the codes. At the moment one of the sellers is AmiAmi, so they might not be able to help, but the other is Furuhon Ichiba so you'll also qualify for a special wallpaper if you order from their listings. Rakuten supports international orders and it's the seller's choice whether or not they accept them, so it's worth trying your order with a few different sellers if the first one doesn't work out until you find one which will ship to your country. Just make sure they mention the early reservation bonus (早期予約特典) in the listing or you might order from someone who doesn't supply it.

Don't even bother with the English version of Rakuten - there's nothing there right now.

Shops which have confirmed they won't be providing the weapons

AmiAmi
I had high hopes for AmiAmi as their Japanese site lists the game with the preorder DLC, but when I contacted them to check their customer service team (very quickly) confirmed that orders through the English version of AmiAmi won't include the codes.

Shops which haven't confirmed either way

If you aren't happy with any of the options, I recommend contacting your preferred import store and pressuring them to confirm whether they will be able to offer the game with the 'early reservation' code. AmiAmi is the only shop which has replied to my enquiries at the moment so please let me know if you hear anything which may help other fans!

There's also the possibility that an Asian version of the game will be solicited and they might issue the codes in a different way, as suggested by wodash. With Sengoku Basara 4, the Asian version only included one of the possible store-exclusive bundles but it was much easier for foreigners to buy it that way than to place an order with the right Japanese store. The only risk is that by waiting to see if this happens you might miss the preorder deadline for the Japanese version.

I hope everyone manages to get the exact version they want. Even if it doesn't work out, perhaps Capcom will eventually change their mind about the exclusivity and offer the codes as paid DLC for people who really, really want to equip Ieyasu with tanuki gloves.
at 12:17:00 pm