Weekly Famitsu magazine (issue dated 23rd April 2015) was just released in Japan but unfortunately the Capcom coverage is lousy this week after we were spoilt last time around. Hopefully the next issue will be better. The only thing I can report is that the PlayStation 3 version of Sengoku Basara 4 Sumeragi has jumped up to 23rd place in Weekly Famitsu's list of most wanted upcoming games. The PlayStation 4 version is now in 36th place too; it looks as though last week's big news update had a positive effect.

The blow was softened a little as this fortnight's issue of Dengeki PlayStation (issue 588) recapped all of the announcements from last Thursday and added a few new screenshots. The shot which seems to depict Masamune and Yukimura teaming up against Yoshiteru for the latter's drama route (bottom of this page) is accompanied by a new one of Yoshiteru's foot in the foreground of a blazing encounter between Masamune, Yukimura and Nobunaga. His drama storyline apparently involves his search for someone worthy to be his rival, so how this might fit with the screenshots is anyone's guess.

Series director Yamamoto Makoto added a few comments about Yoshiteru for Dengeki PlayStation's article.
A few other miscellaneous points from the article, some of which are already mentioned on the website too except I forgot to add them to my last news post:
The game is currently sitting in 9th place in Dengeki PlayStation's ranking of upcoming games (the voting split is 11.7% PS4, 88.3% PS3).

There's one other new picture of Kanetsugu and it shows him flying into the air weirdly. Expect the new pictures to turn up on various gaming websites in the next few hours now the magazine has gone on sale.

The official website updated a few days ago to add samples of the additional wallpaper buyers will be offered if they preorder the game early enough to qualify for Yoshiteru's weapon, depending on which shop you use for your preorder. The options are pictured here (descriptions below): 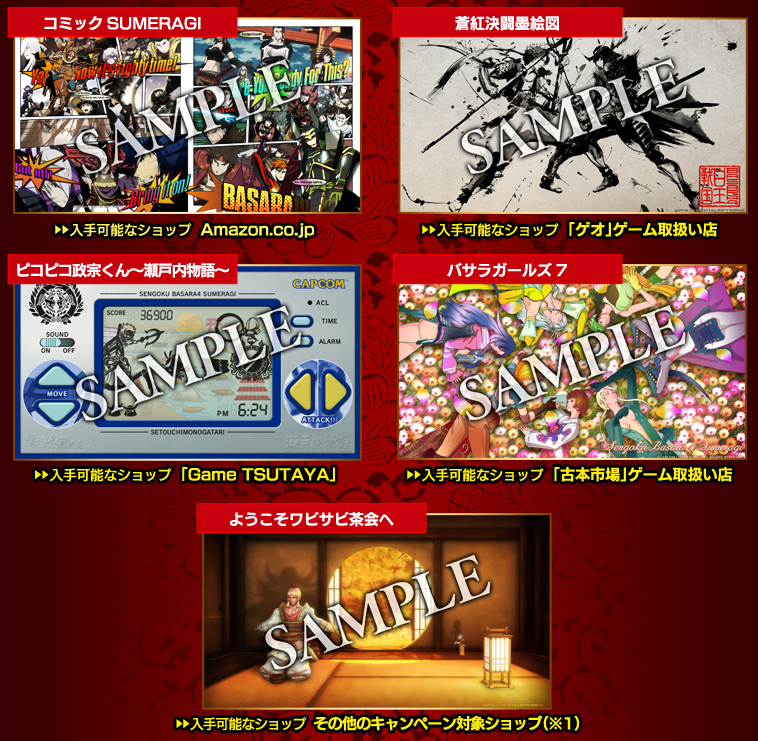 It's likely most import stores will be offering the final one (if any) but I'll confirm once we know the full preorder details on 18th April. If the new video doesn't appear online in a site update tonight, I guess it will follow on or around the 18th April too to help promote the preorder campaign.

Monthly magazine Dengeki Maoh has been running extra instalments of Sengoku Basara series director YamamotoD's BASARA Sengoku HERO column from Sengoku Basara Magazine recently. It's the ongoing column where he discusses how each character was created using actual historical anecdotes as inspiration. This is great as it means they can cover characters at a quicker rate but since it's not really advertised well I had to order the issues I missed! Here are the three columns I've found so far.