It's Sunday in Japan and that means more Nico Nico Choukaigi coverage! I think that most of today's content will be very similar to what was shown yesterday. Don't forget that you can use Nico Nico's Timeshift feature to reserve and view the live streams even after they've finished. They'll expire on 2nd May 2015. 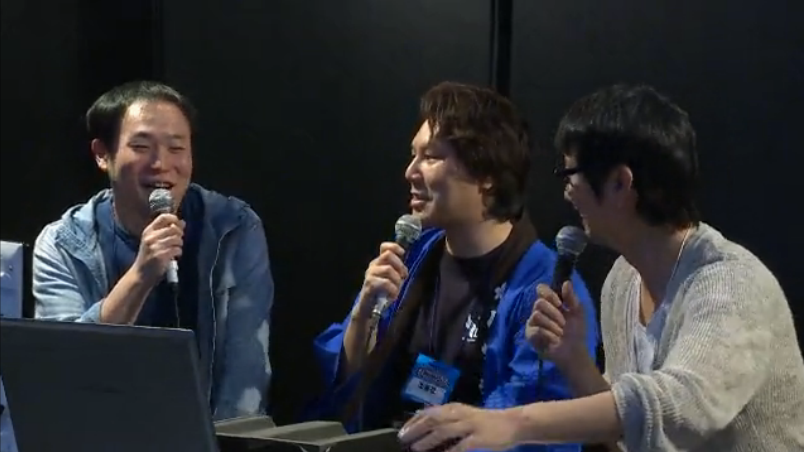 They opened up with the old PV from Basara Matsuri again but this time YamamotoD provided commentary over the top to introduce the new characters to viewers. He mentioned some kind of drama between the Setouchi characters.

They then went through the new characters with slides. Since it was a repeat of yesterday's information, the tone was much more informal today. KobaP joked that Yoshiteru's time-stop roulette result was like 'The World' from a certain popular shounen manga and later they described Katsuie's new medal outfit as his Turn A Gundam costume. When they got to the returning NPCs KobaP introduced the Uesugi ninja as the 'super-popular Kasuga-chan'.

Other things I picked up were that fans can expect to see an Akechi Mitsuhide costume in the medal rewards and Mitsunari's skill revision lets him cleave the ground.

YamamotoD referred to the scenes of Hideyoshi holding Mitsunari and Ieyasu up with his arms and confirmed it was a reference to the two of them being the Left Arm and Right Arm of the Toyotomi in one of the scenarios. This setting was also used in the last stage play, so I guess those who have seen it might have a few ideas about how the story will develop. I'm not going to spoil it here.

We also got two new video messages from the other NJPW wrestlers who weren't featured yesterday. They both seemed sweet and said they were looking forward to the game. 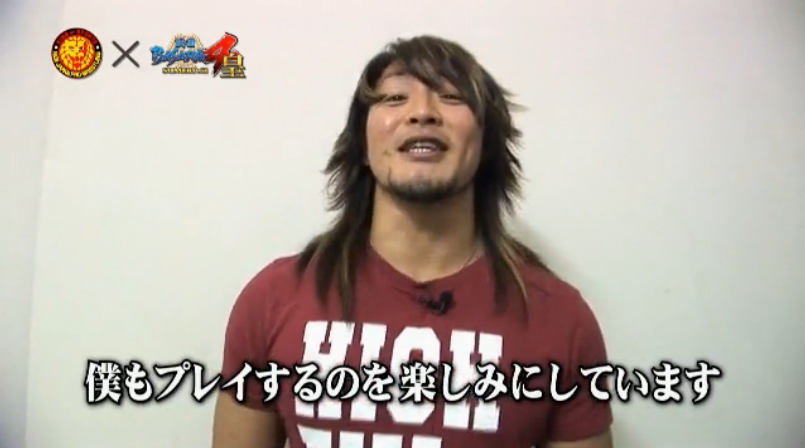 YamamotoD went into a lot of detail about Sen No Rikyuu's Giga Basara imagery during the discussion about the game's theme songs. The title of Ishikawa Chiaki's ending theme Heavenly Blue can refer to the distinctive colouring of the morning glory (asagao) flowers that Sen No Rikyuu is famously associated with. The plants in his ink artwork are morning glories too and the two infants represent Wabisuke and Sabisuke.

The next panel I tuned in for was the gameplay preview session. For some bizarre reason Capcom TV decided to run a Sengoku Basara 4 Sumeragi gameplay preview on their YouTube channel at the exact same time so it was very confusing keeping track of both. The dedicated Nico Nico stream had much better commentary and gameplay.

They showed the character select screen in Free Battle mode. You can see Yoshiteru's new (very pixellated) elemental symbol in his profile. 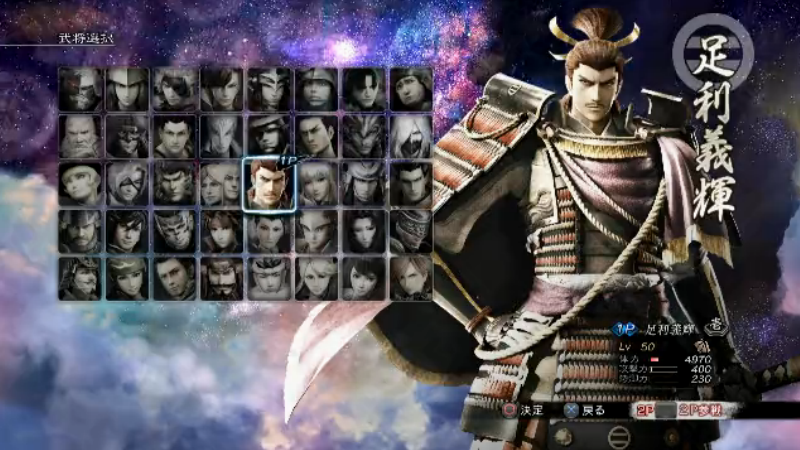 Gatchman was lucky enough to get the Akatsukimaru transformation in Battle Roulette during his Yoshiteru gameplay session so he demonstrated how quickly it could move; it zoomed through the stage leaving a trail of destruction.

It was shown yesterday too but the four different elemental attacks from Yoshiteru's Senban No Kiwami ('The Lathe's Zenith') R2 special are named after the classical four gods. They are Genbu (a blue ice effect), Byakko (lightning), Suzaku (fire) and Seiryuu (a dragon made of darkness). Missing with this move is what triggers the panels which cover part of the screen. Missing with his main roulette move triggers seals which appear on his body and weaken Yoshiteru; I think they said it locked his Basara for a short time but I'll have to check properly later.

The second character Gatchman demonstrated today was Maria. Her third special where she controls the camera is quite hard to pull off; she can be knocked out of it easily. Her first special seems to be the move where she grabs the enemy's attention by blowing a kiss at them then wraps them up in cloth. Even though all of the demonstrations are on the easiest difficulty - only Normal and Hard were available in the version on display - poor Gatchman was almost wiped out when he rushed to the end to fight Shingen and Kenshin.

The third demonstration was Sen No Rikyuu. His elemental symbol can also be seen on the character select screen. 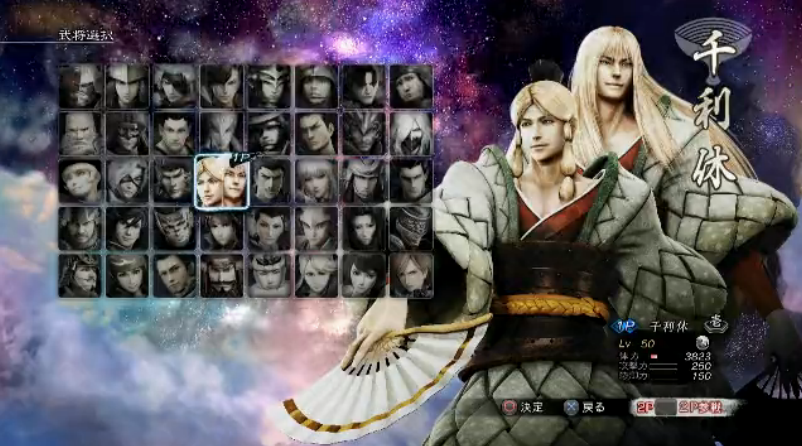 YamamotoD wanted to show the way that the game randomly picks either Wabisuke or Sabisuke on the battle preparation screen and randomises which character you start as each time you load the level, but for some reason they kept getting Sabisuke no matter how many times they went back to the character select screen. Wabisuke must be camera shy... 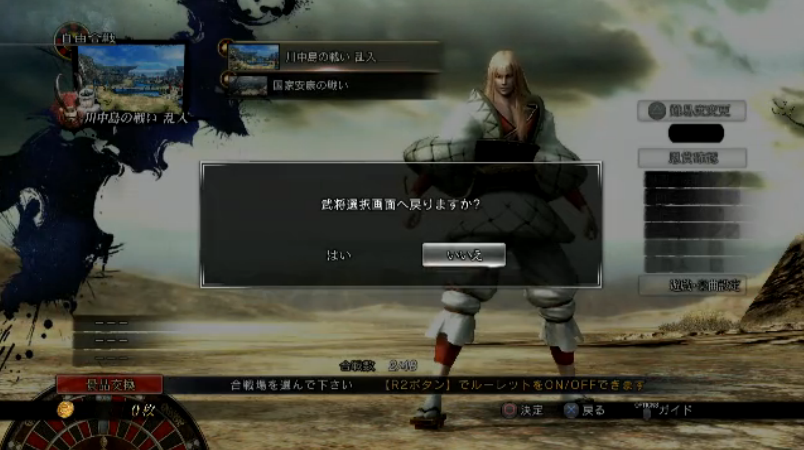 Just as the demonstration was getting started, the costume-clad 'Bokesuke' wandered over from the Capcom TV presentation and gatecrashed the broadcast. After some silly banter he sat down and joined in with the gameplay commentary. 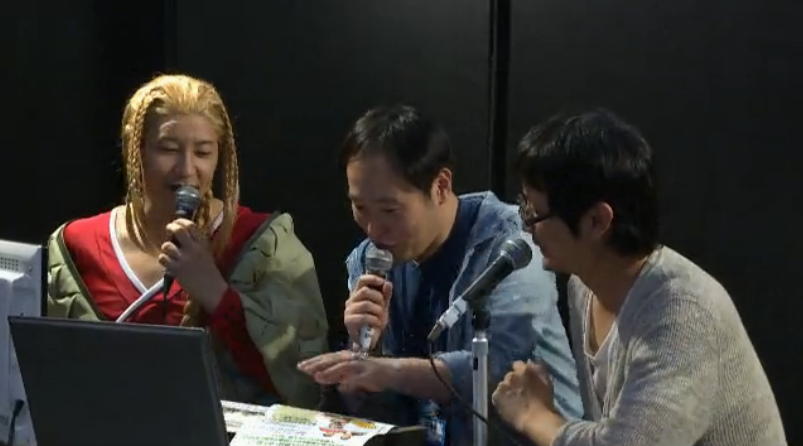 Bokesuke is a fictitious third personality who is supposedly signed up to the famous Yoshimoto talent agency (alongside Wabisuke and Sabisuke, of course). He's played by real-life comedian Osada Shouhei of Chocolate Planet. During the Capcom TV stream a little earlier he'd come on stage and introduced himself with the fake announcement that Chocolate Planet was changing its name to Green Tea Planet. 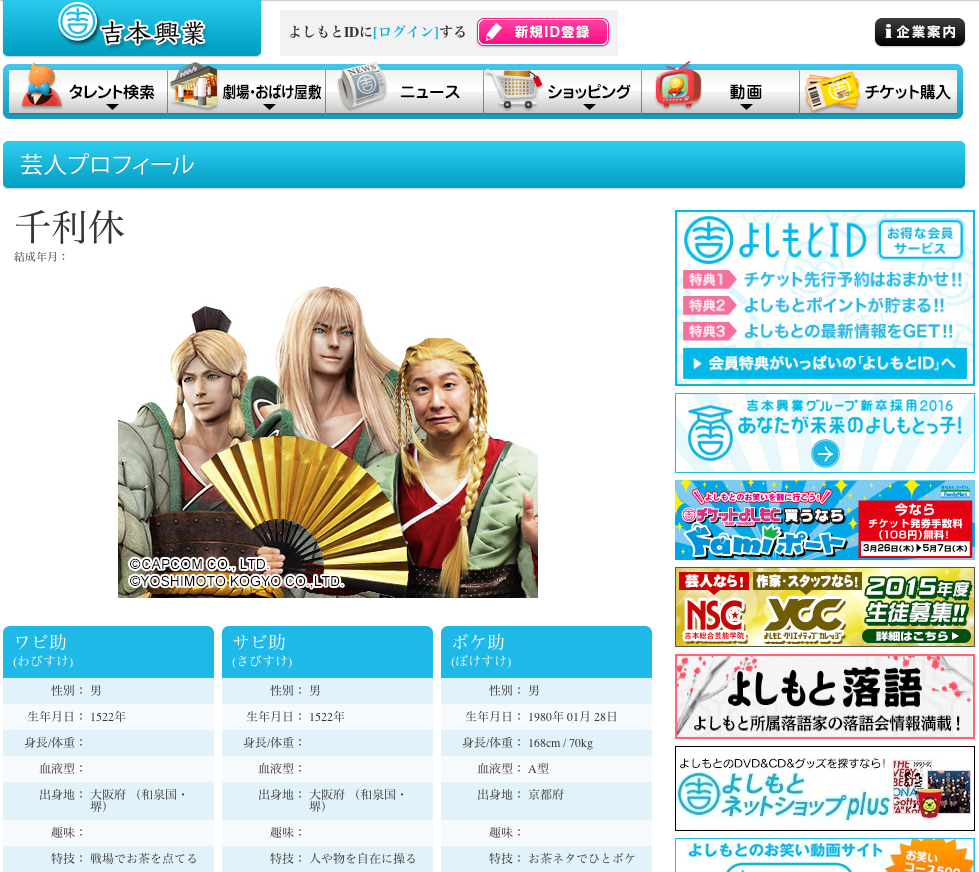 I suppose it makes a change from the usual booth babes!

Once Bokesuke left the players went back to demonstrating the game properly again. They showed a Giga Basara attack with Rikyuu and Yoshiteru and had some fun with tagging, then went ahead and finished the stage. 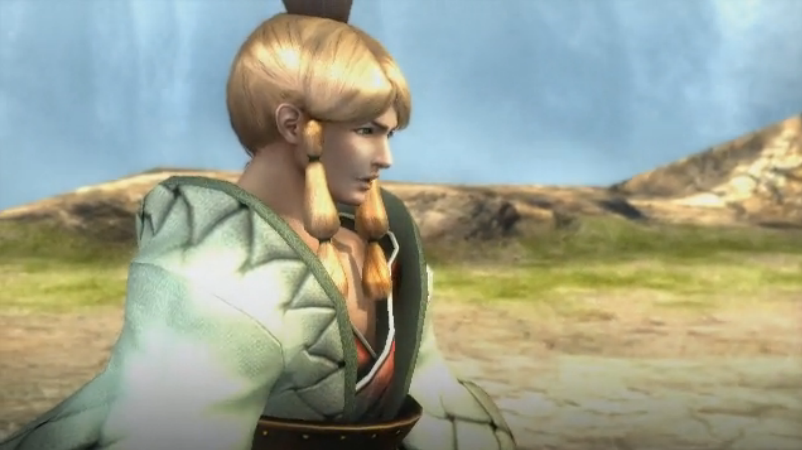 As a treat they let the viewers see Rikyuu's victory sequence, which switched between both identities then showed Sabisuke blasting of into the sky. 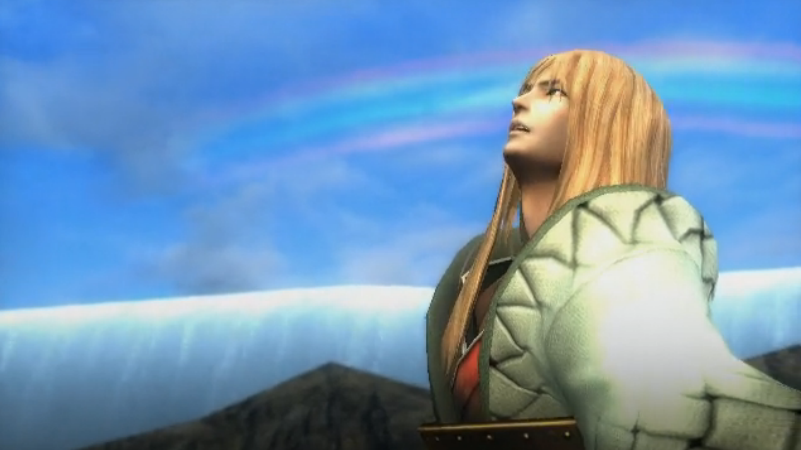 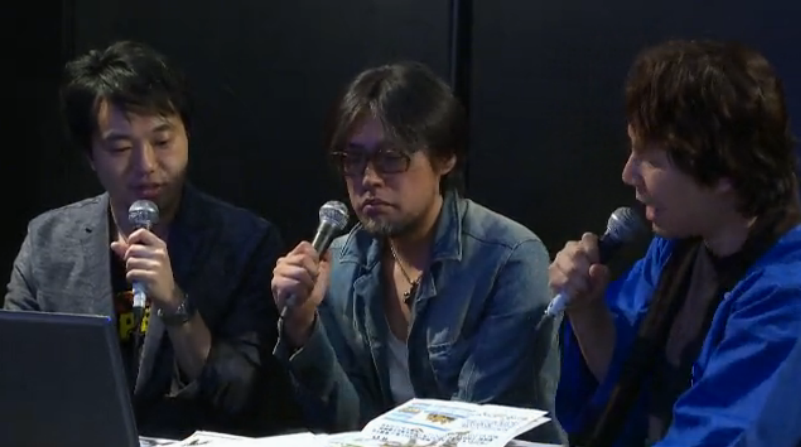 Both men were very talkative and engaged. They introduced their own titles first, then the discussion turned to Sengoku Basara 4 Sumeragi and other Capcom games. 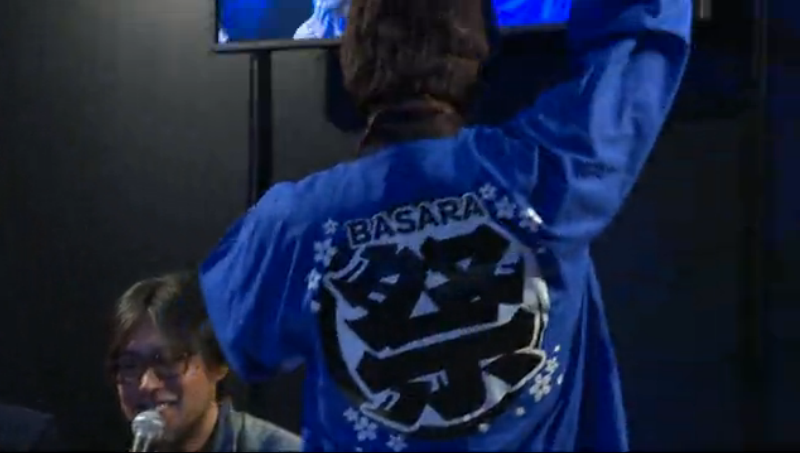 Once the discussion was over, KobaP was joined by the next set of guests: Matsuyama Hiroshi of CyberConnect2 (company president) and Harada Katsuhiro of Bandai Namco Entertainment (Tekken project leader). Harada was wearing a Pikachu onesie as tribute to Pokken Tournament and he'd decorated it with a blue ribbon - a reference to Hestia from anime DanMachi and a recent meme. 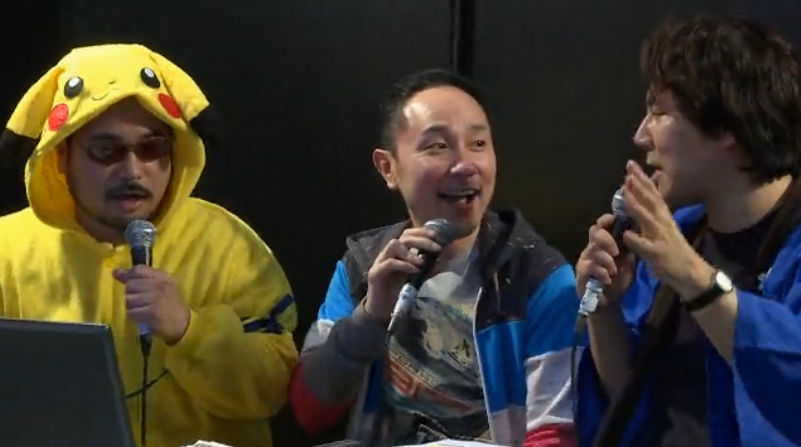 It was difficult to pay attention properly with Harada dressed in such a ridiculous manner and the conversation was even crazier than the last one.
It was another presentation which was deeply funny if you could follow the Japanese but there were no visual aids for anyone who couldn't.

The last event of the day was the second Challenge Gatchman! Sengoku Basara 4 Sumeragi 'Super★Bomb Soldier Challenge'. The stages were the same as before and since it is a special build of the game it's hard to say whether any conclusions can be drawn from the gameplay that was shown; a lot of the Nico Nico commenters were hoping for lots of enemies on screen at once and complaining about how expensive it was to buy a PlayStation 4.

The second player from the audience was a young man who said Sasuke was his favourite character so while they were chatting YamamotoD confirmed that Sasuke was definitely getting a drama route in Sengoku Basara 4 Sumeragi (it was also mentioned the day before). During the challenge they managed to sprint to the end and clear the entire stage (proving that Sasuke was a sub-boss in the process). Sadly the bomb soldier didn't have his own victory sequence.

Once the challenge session was over, Capcom announced that players at the demonstration area in their booth had managed to earn a total of 173,786 medals today for a total of 373,820 over the weekend! Even if the medal rewards are less common in the actual game than in the trial version, it looks quite easy to acquire them.

Bonus: Notes from yesterday's 'Party with KobaP and the developers!' panel.

I didn't cover this at the time as I'd been watching the live streamsall night long and was exhausted, so I watched it today instead. KobaP sat down with directors Itsuno Hideaki (Devil May Cry 4 SE) and Yamamoto Makoto (Sengoku Basara 4 Sumeragi) to discuss various behind-the-scenes trivia now that both of the new games are approaching release. 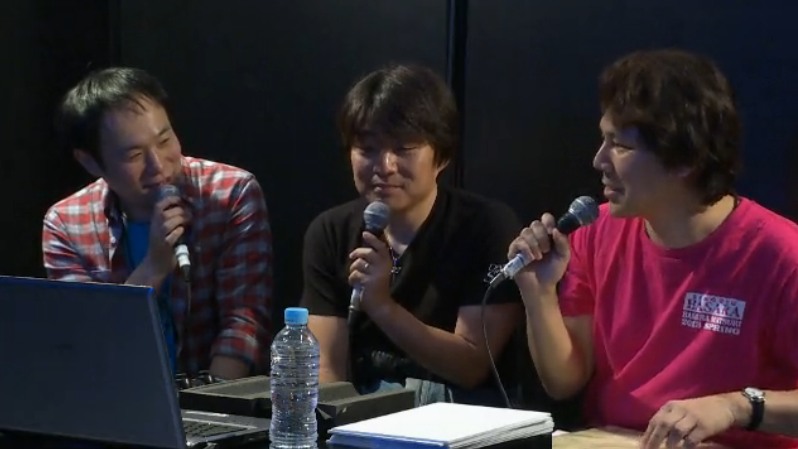 KobaP had some oversized question cards prepared to help stimulate the discussion. The directors drew the cards at random. I'm not going to translate every word but here are a few points I found interesting:
--

There was also occasional coverage on the Capcom TV YouTube channel which can still be watched now that the event is over. Please note that I have nothing against DMC but I didn't watch those shows because I didn't want to miss any Sengoku Basara coverage.
at 5:16:00 am