Speculation: Who is the mysterious woman in the newest Sengoku Basara 4 trailer?

I think it's time I rounded up all of the main guesses about the identity of the mysterious new character in case we get the answer this week. Here's a quick summary of what we know about her for sure:

So who is she? Here are the names which seem to keep coming up on English and Japanese discussion forums. 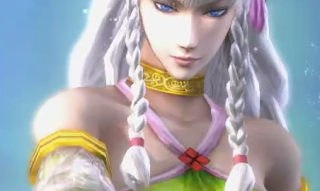 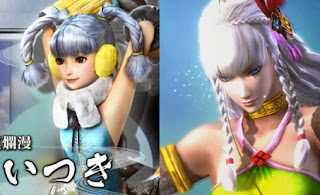 I wasn't convinced by this guess at first, but Japanese fans have been digging up clues and they've built up quite a few good arguments.

Finally, there's the matter of the mystery flag seen behind Oichi in the same video. 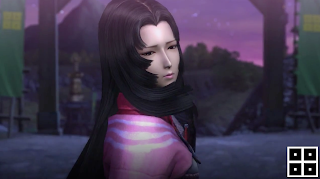 It's a distinctively lurid green/yellow colour, just like the clothing worn by our mysterious woman. The crest (which I've singled out in the corner) is a yotsumeyui design. This was used by a number of families, significantly including both the Amago and the Kyougoku. 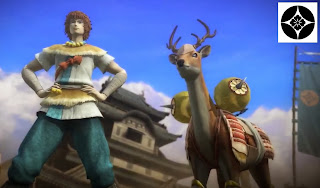 We know that Yamanaka Shikanosuke is tied to the Amago family. However, his livery colours are blue/orange, not green/yellow, and he seems to be using the alternate hanawachigai crest instead of the yotsumeyui. In Sengoku Basara 3, Amago Haruhisa wore the yotsumeyui on his headpiece but used a pink/grey hanawachigai on his banners too. 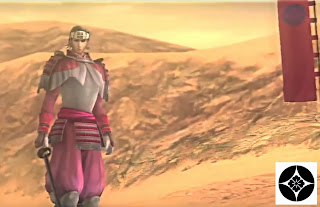 Given all of this evidence, I think it's safe to say that the flag behind Oichi is not associated with the Amago family in Sengoku Basara 4. Yet our mysterious lady's belt design seems to incorporate the same shape as the crest on the flag.

If it really does belong to our mystery lady, the chance of her being Kyougoku Maria increases greatly. Then there's the fact that it's shown behind Oichi, who has ties to the Azai family Maria was born into. I'm becoming convinced.

There are plenty of other suggestions, ranging from one of the male characters in drag to Matsuhime, Tachibana Ginchiyo, Nene or Hosokawa Gracia (who also has ties to the Tango area). Someone even wondered whether she was Shikanosuke's deer in human form!

I think that a visitor from the past, a spouse or a sibling is more likely than the new girl being one of the existing characters' children; Capcom has apparently tried to avoid true parent-child relationships in the series so far. While we wait for some kind of official confirmation the discussion has been continuing over at Koei Warriors!
at 4:06:00 pm