As fans waited expectantly for the next Sengoku Basara 4 DLC preview videos to silently appear online, this week's magazines and website update provided little relief with no new character announcements at all. It was quite surprising, then, when a brand new video was released this morning via Famitsu and other select gaming news sites. It includes a glimpse of some of Production I.G.'s anime cutscenes as well as a mysterious nameless woman and the ladies of the series - including Oichi and Kasuga.


The accompanying press article isn't much help in providing clues about the identity of the new female character, who is suggested to be the last of the newcomers this time, and just urges fans to wait for more news in the future. Fans in both Japan and the west have been speculating that she might be Himiko (who features in Tsuruhime's story) or have something to do with Itsuki, to whom she bears a slight resemblance. The news article also mentions that some characters have an 'anime route' which occurs in the game's Sengoku Creation mode and leads to the anime cutscenes which have been teased.

Update: A later article posted by Dengeki explicitly referred to her as a 'mysterious enemy bushou', which is how Capcom formally refer to the series' non-playable characters.

As the source is KobaP's live presentation at the stage play open rehearsal today it's likely he used the wording himself, so unless Dengeki misunderstood it looks very likely that this woman is an elusive non-playable counterpart to the game's boss, Ashikaga Yoshiteru.

It's been fun watching the Japanese speculation alongside the English-speaking side of the fandom. I liked this list of popular guesses from Twitter user @sanpolan; so far they've got Izumi No Okuni, Mochizuki Chiyome, a grown-up Itsuki, Himiko, Kenshin (lol), Mitsuhide 'doing his best' and 'Hanbee reborn'.

All seven costume preorder trailers are now available for viewing

In addition to this exciting new trailer, Famitsu posted a compilation video highlighting all of the preorder DLC costumes.


Update: Capcom later posted all of the videos on their own channel too. For future reference, here's the full list.

Ishikawa Chiaki, who provided several songs for the series in the past, has supplied two new songs for the new Butai Sengoku Basara 3 Utage Two stage play: Ao No Naka No Ao and Zenya. In addition, there will be two 15-minute talk events held after the Tokyo shows. After the evening show on 7th November, actors Nakamura, Yoshida and Murata will come out and talk on stage. The next day, Nakamura, Takigawa and Yoshioka will participate instead.

Attendees are able to preorder the DVD version of the stage play, which is going to be released in March 2014 priced at ¥6,500. Online preordering won't be possible until after the play has finished its run. The first reports about the play's content should be arriving very soon!

Update: And here are the first reports from Dengeki Gpara and Famitsu from the open dress rehearsal, including pictures of the new actors in costume and some comments. Itsuki has her fan club, and the Miyoshi trio look suitably menacing. It appears that KobaP presented today's Sengoku Basara 4 news on stage as well.

Sengoku Basara Magazine issue three to be released in November

There hasn't been a formal announcement yet, but bookstores have started to list the third volume of Sengoku Basara Magazine with a release date of 27th November 2013. This will be the issue with Tokugawa Ieyasu on the cover and a Yukimura/Sasuke talk CD (more details here). Hopefully we'll get to learn some more about the cast of Sengoku Basara 4 once it's been released.

Update: And an hour after I finally posted this news, a full article appeared with more details and the final cover artwork! There's going to be a 27-page Sengoku Basara 4 feature, including an interview with the seiyuu for Shima Sakon (Nakamura Yuuichi) and Shibata Katsuie (Okamoto Nobuhiko) and profiles for 19 new characters. This presumably follows on straight from the feature in the previous issue which included the first 13, so we can logically expect 5 more character announcements before the magazine is released. Ieyasu will feature prominently with a joint interview between his voice and stage actors, Ookawa Tooru and Hirose Yuusuke. Wan-Nyan Sengoku Basara has also been confirmed as the title for the one-shot bonus manga.

Famitsu's website has revealed that Sengoku Basara 4 will be adapted into a manga. The February issue of Dengeki Maoh magazine (released on 27th December 2013) will feature the first chapter of Yoshihara Motoki's manga adaptation, then the February issue of Jump SQ (released on 4th January 2014) will include a one-shot story. There are some character sketches at the link showing Masamune, Sakon and Katsuie.

Signing event to be held to celebrate the release of Sengoku Basara 3 Bloody Angel vol. 6

Animate Shibuya will be hosting a signing event with manga artist Itou Ryuu on 23rd November 2013 to mark the release of the series' sixth volume this month.

Sengoku Basara 4 to be playable at this weekend's Mansai festival

The Mansai festival is a celebration of manga which is held annually in Kouchi. It takes place between the 2nd and 3rd November 2013 this year, and even though it's short notice Capcom have announced that visitors to the event will have a chance to play the demo version of Sengoku Basara 4 from TGS 2013. There will also be goodies on offer for visitors to the Capcom area.

Sengoku Basara 4 nengajou to be available through Yahoo! Japan

The New Year is a time where most people in Japan send special greetings cards called nengajou to one another, and Yahoo! Japan has an online service for this tradition at Yahoo! Japan Nengajou. This year, it's going to be offering some Sengoku Basara 4 designs from 2nd December. 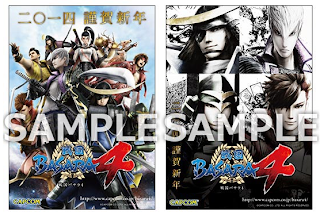 More Sengoku Basara 4 events to take place over the winter

Five special Sengoku Basara 4 mini-events are going to be held over the next few months in selected stores across Japan. Series producer Kobayashi Hiroyuki will be in attendance to offer signings and meet the fans who preordered the game at the store. The TGS 2013 playable demo will be available (along with a limited number of Sengoku Basara 4 tote bags and promotional posters). To make things more interesting each of the five locations will be showing a different brand new video, so we should get a new video every week for a whole month!

Of course, they'll be taking the opportunity to promote the new 3DS title Geist Crusher too...

If you're in the area you can visit Hokkaido (Sapporo's Yodobashi Camera) on 9th November, Nagoya (Bic Camera) on 16th November, Fukuoka (Hakata's Yodobashi Camera) on 23rd November or Osaka (Nipponbashi's Joshin Denki Disk Pier) on 30th November. The details for the Kanto-area event on 8th December have not yet been revealed. Fans are being encouraged to live-tweet their impressions of the events to receive a Sengoku Basara 4 wallpaper for their mobile devices.

Update 20:00: The news kept flowing in all day long, so I've gone back and added pictures to finish it off! I also put all of the new dates into the calendar for a visual representation of how hard the Sengoku Basara 4 team are working to promote the game.
at 7:53:00 am