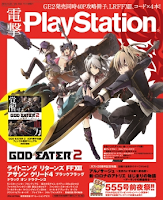 I stopped buying Dengeki Playstation as they'd stopped including any new game information (it's not a cheap magazine!) but last week's Weekly Famitsu reveal had a brand new character, so I thought it was worth a shot.

Sengoku Basara 4 has moved up from 14th place in Dengeki Playstation's ranking of upcoming games, and it's now sitting in 13th place.

That wasn't all, though; I'm pleased to say that game director Yamamoto Makoto returned to give some comments on the three newest character announcements this week! He must have been in an extremely cheerful mood when he was writing these notes.

Kyougoku Maria: The name 'Maria' begins to spin the threads of fate?
Azai Nagamasa: Absolute Justice! The revival of the 'hero'!!
Oichi: Pay close attention to the relationship between Oichi and Shibata Katsuie!!
A screenshot of the Takeda trio has the subtitle 'Kawanakajima: Hachimanpara'. I think this decisively confirms yesterday's speculation about there being a Kawanakajima stage in the game, and as that particular battle is famous for Kenshin's participation and it's likely to be the stage we've seen in the picture of Kasuga, the staff seem to be hinting about the Uesugi forces very strongly. In addition, Kawanakajima Hachimanpara was particularly known for being where Takeda Shingen camped his forces during the fighting. It's likely that the huge Takeda area we saw during the Kojuurou segment of the newest video is part of this Kawanakajima: Hachimanpara stage.

Perhaps less worthy of speculation is a shot of Nagamasa on Maria's stage - with Shima Sakon casually standing atop his head.

The magazine also covers the same new gameplay mechanics Weekly Famitsu introduced last week, including a few new pictures. More about these in my next news story...

The Sony Playstation blog updated yesterday with a plethora of Sengoku Basara 4 screenshots, including several I had never seen before.

The picture of the game's mode selection screen includes Manual (this could include a tutorial, perhaps?), Online Basara-ya Shop, Sengoku Creation mode (the interactive story mode which contains the main gameplay), Free mode, Gallery and Settings. I have annotated the picture to show the order in which the modes appear. 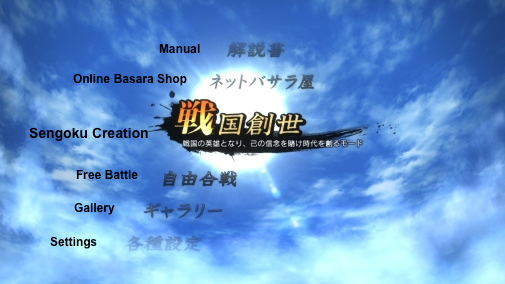 The character selection screen appears to confirm that two-player co-op play will be available in Sengoku Creation mode, as well as progress being measured in years of your reign rather than stages, something which ties in with the comments made in last week's Famitsu magazine.

Skipping the details we already know, the pictures of the march screen show Mitsunari with a 'drama route' scene at Motochika's Pirate Fortress: Hyakki Fugaku stage, Katsuie with an 'anime route' scene at Hideyoshi's Osaka: Toyotomi Hajou castle and Shikanosuke as the boss in a 'one-on-one fight' (?) but on a stage full of Yoshihiro's flags. The text notes that if you leave an 'omen' battle on the map without engaging, it can change into a 'derivation' battle.

We can also see a picture of what could be Naotora's tiger basara-e artwork, though it seems to be red and hanging in the air behind her. Nine Demons Yoshitaka once noted that people were saying hers was of a tiger with a flower in its mouth, and that's exactly what the illustration seems to show. 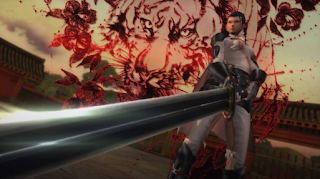 DarkMantisTalon, meanwhile, noticed a suspicious icon in one screenshot which might imply that it's possible to use tag mode with your battle comrade.

The final new thing I want to highlight is the screen where you see your rewards for the next battle. This picture is extremely small, however there's a slightly different (and equally small) version in Dengeki Playstation so we're getting a clearer idea of the prizes on offer for each battle. Please understand that I might easily have misread at this size. These rewards are for clearing Incident At Honnouji as an 'outbreak'. 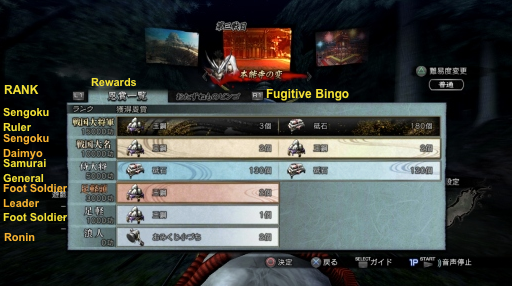 The Dengeki Playstation shot shows that you can get weapons and money as rewards as well as the icons shown above, using the example of Tango: Sengenji as a 'normal' stage. There's a fugitive icon above the stage name in their picture though, so that might affect the rewards somehow.

The left column in Dengeki Playstation shows Masamune's swords Kagehide and Kagehide (Unsigned) while the right one has Kojuurou's Kokuryuu and Kokuryuu (Unsigned) and a sheet of some kind of material with a quantity beside it. I can't read the tiny, tiny labels next to them which presumably explain the difference between the various weapons, but I'm guessing they boost different stats when you receive one as your reward.

Update 14/11/2013: Since 4Gamer has posted much clearer versions of the screenshots, I can now read the labels next to the weapons; in top-to-bottom, left-to-right order they look like (ignoring duplicates) steal food, stylish, find, experience, hardness and willpower. The flat sheet here is a stat bonus material (double hit points).

There's a new picture too (which confirms another stage - 'Investigation: Shikanosuke', the fight where he appears surrounded by Yoshihiro's flags). Kojuurou has his leek/burdock joke weapon back with the name 'nourishment' and Masamune has a wooden 'battou' which looks like it's actually a 'batto', or baseball bat. A few other alternate swords can also be seen, and there are some additional weapon labels detailing properties like collection, protection, break defence, tastiness and training.

Small coloured labels advise that the rewards on the right are for the character you selected as your battle comrade (or the second player in co-op mode, I assume) while the ones on the left side are for the player's own character. That was already pretty obvious but now it's confirmed.

The team of Nine Demons Yoshitaka and PSandNintendFreak have outdone themselves with their speed this week, adding English subtitles to the newest character gameplay trailer already. You can watch it on YouTube or below.

It's been a while since I reported on mobile game Sengoku Basara Card Heroes Matsuri, and given that it's unlikely anyone playing it doesn't already speak Japanese it hasn't seemed all that important. Still, I should mention that Capcom is also running a crossover event with the Biohazard (Resident Evil) series title Minna To Biohazard Team Survive until 10th December 2013. I have no idea what that the other game is like, but the idea is that you earn special cards for the game you actually like by giving the other a try. The Sengoku Basara Card Heroes Matsuri reward you can earn by dabbling in Minna To Biohazard Team Survive is this rare Date Masamune 'The Dragon's Ambition' card. 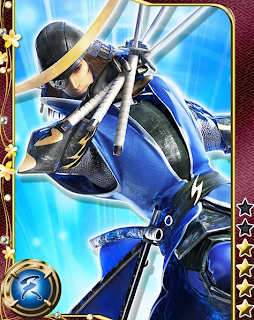 A funny (and cute) Tsuruhime picture from another Card Heroes Matsuri event has been circulating on Twitter recently as well. The comment was "I thought it was a different game!".

This isn't exactly news, but as a result of the new promotional video for this Capcom smartphone game being posted today, I was able to grab textless versions of the artwork they are using for Masamune and Yukimura. There will probably be more Sengoku Basara content in this title if the official website is to be believed.

The CafeReo website has announced a range of charms themed around the emblems of a few key characters from Sengoku Basara 4. Each of the charms will cost ¥1,000 and four designs will be available in mid-January 2014, patterned after Masamune, Mitsunari, Yukimura and Kojuurou. I think they're rather nice!